In this article we are going to talk about aggressive roosters.

Roosters have a job to do and they take it very seriously. They protect their flock and are responsible for the welfare and survival of the flock.

That is a lot of responsibility.

The majority of roosters do well and cooperate with human flock keepers. But some see their humans as a threat to the flock.

With a feisty rooster you are going to have to earn his respect, he will not give it to you automatically.

This behavior can be modified but you have to be prepared to put a good deal of effort into working with your rooster. It will be frustrating, scary, tedious and funny at times as you both work together towards a harmonic relationship.

In this article we are going to give you the tips and tricks to help calm your rooster down and make him easier to live with. We will explain everything you need to know about aggressive roosters…

Why Are Roosters Aggressive? 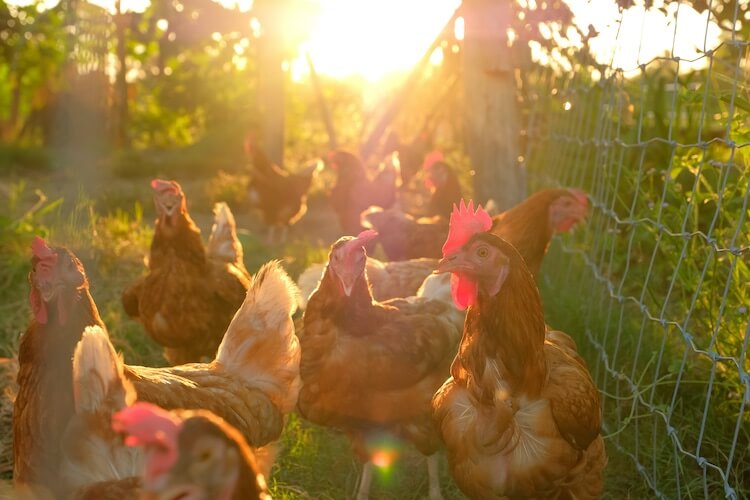 You need to remember that roosters do not attack to be mean.

Roosters are genetically programmed to protect their flock against any threats.

It is their genetic makeup.

A good rooster will lay down his life to protect his hens from threats and attacks – it is his way to make sure the flock (and his genetics) survives.

When you think about it, no 8lb creature in their right mind would face off with a 200lb human. Although your rooster is prepared to fight to the death, he is hoping you will back down.

You will have to learn to accept that roosters were not meant to be cuddly pets.

However there is a happy medium where you can still touch and interact with your roo and he will not perceive you as a threat to the flock (more on this later).

Protecting Yourself From A Rooster Attack 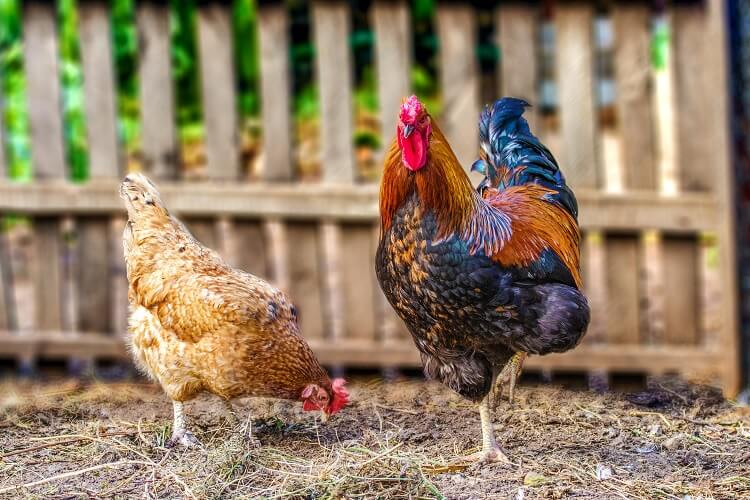 To be able to protect yourself from a rooster attack you first need to understand the different types of attack.

There are four main types of assault: flogging, spurring, chasing and aggressive pecking.

Flogging is when they fly at you and try to beat you with their wings. It can be quite scary having a large rooster fly up into your body and face.

Spurring is where he will try to get close enough to rake you with his claws and spurs. If he connects with you this can be very painful and you may need to visit the local emergency room.

Chasing is as it sounds. Small children and people that are afraid of the rooster may be chased out of his territory.

Pecking is something that starts as a chick. Many people tolerate this because they think it is a cute natural behavior whilst they are a chick. If a chick starts pecking you the behavior should immediately be discouraged because this is not easy to stop once a rooster is fully grown.

Signs To Know When A Rooster Will Attack

It can be hard to know when a rooster is about to attack because they are sneaky.

Roosters rarely attack from the front. Instead they attack you from the side or behind – they do not fight fair. Surprise and winning is the name of the game.

There are small signs to watch for.

A rooster lowering his head while still keeping an eye on you, fidgeting or dancing around is looking for the best opening for attack.

He may start running towards you, stop and start staring. The stare is a challenge, you should return it and stare back.

Occasionally a rooster may give you treats – this is an indication he thinks you are inferior to him. He may also start doing the rooster mating dance around you. This means he wants to dominate you.

If a rooster is doing any of these things with you then you need to tame him (more on this later).

You should always dress accordingly too.

Wear a long sleeved shirt, gloves, boots and jeans to protect your skin.

How To Tame Aggressive Roosters 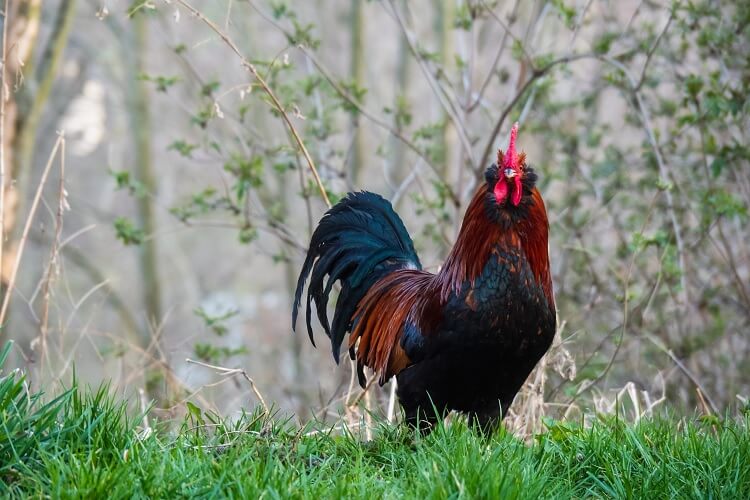 Roosters are rarely aggressive towards a hen.

The biggest issue is roosters that are overly enthusiastic to mate.

Young roos that have not quite mastered the art of mating can be rough with the hens. This should settle down with time and practice and hens will avoid him as best they can.

You should always check on your hens if you have an amorous young roo. Claw marks on their back and sides are not uncommon. Hens who have a bit of a bald spot on their heads are the favorites so check them frequently.

Injured hens should be removed and treated in isolation for a few days.

If the hens are actively avoiding the rooster then it might be best to remove the rooster for a few days so the ladies can have some peace and quiet.

You should aim to have a minimum of eight hens per rooster. Read How Many Roosters Can I Have? The Golden Ratio Explained.

If you raise your roosters from chicks then you stand a much better chance of having him behave like a gentleman.

However you have to start early. You have around 16 weeks to reinforce that you are the alpha chicken and that you present no threat to him. Once his hormones start up you should be prepared for some behavioral changes.

One of the first behaviors to watch out for is pecking.

This must be discouraged from an early age before it becomes a set behavior. You should not be tolerating it because it is cute or adorable. If he starts pecking you then pick him up and talk to him then put him down.

Keep reinforcing your friendship and offer him food and tidbits.

Always avoid quick, rushed movements around him just in case he interprets it as an attack.

But what happens if your rooster turns into a little monster?

It is important not to show fear (this can be hard especially if you have already been flogged). He will be able to sense your fear and will use it against you. You must remain calm, walk slowly and purposefully and keep talking to him in a soft voice.

Be alert at all times, he is going to wait to attack until your guard is down.

If he runs up behind you and stops short staring, he is issuing a challenge. Turn to him and stare and take a large step into his space. Do not break eye contact. If he spreads his wings and lowers his head, do the same and continue staring. If he is a smart rooster then he will back down. He will drop his wings and start plucking at grass, you have won. Walk away slowly and cautiously, remember they love sneak attacks.

However if he flies at you then you should stand still.

Do not wave your arms around and do not run.

When he drops to the ground quickly pick him up and tuck him under your arm. You can sit with him or walk around the yard. Talk to him softly to calm him down, offer some hand treats to show you are his friend. You should start to feel him relax after a while. When you think he is relaxed enough to put him on the ground.

If he attacks again, start the process over again. The whole point here is to teach him that attacking you is futile and that he is not going to win the contest.

Needless to say the behaviors will not change overnight, it takes time and a lot of patience. Some roos learn quicker than others and some never wanted to be mean in the first place. 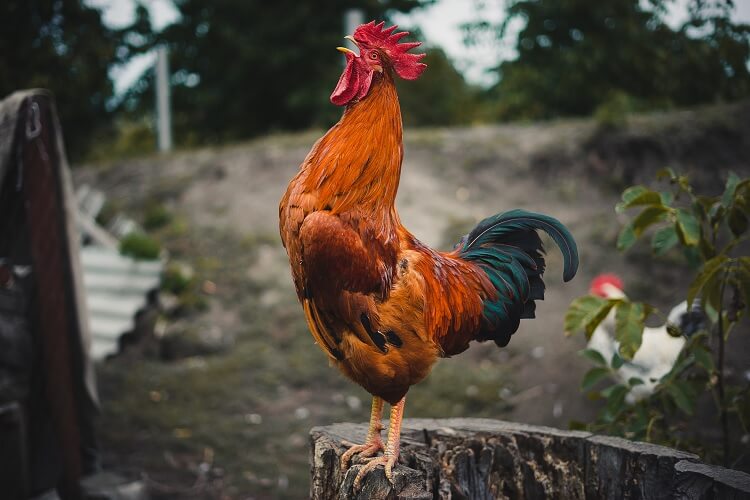 Rooster To Other Roosters

This will depend on how many roosters you have in your flock.

Some minor aggression in a flock containing more than one rooster is to be expected. This is called the pecking order and is part of acceptable behavior.

However it becomes unacceptable when one rooster is being constantly harassed and bullied.

If you see this happening then you should step in and stop the aggression.

Which Rooster Breeds Are The Most Aggressive?

In the wild roosters are not very aggressive, they tend to avoid conflict with another male unless it is a direct challenge to their authority.

However lots of modern rooster breeds are well known for being aggressive.

All of these breeds have one thing in common: they have all been bred by humans for cockfighting. Breeds that have been purposely bred for aggression are:

The appearance of a rooster can also give you some idea if there was cockfighting in their history. Many fighting cocks will have small combs and wattles, strong muscular legs and body. These roosters should be avoided if you want peace and harmony in your flock.

Unless you know your chickens, you should not start out with game breeds.

You also need to know that some bantam roosters can be incredibly feisty for their size. They do not seem to care they are small and may pick a fight with a standard sized rooster. 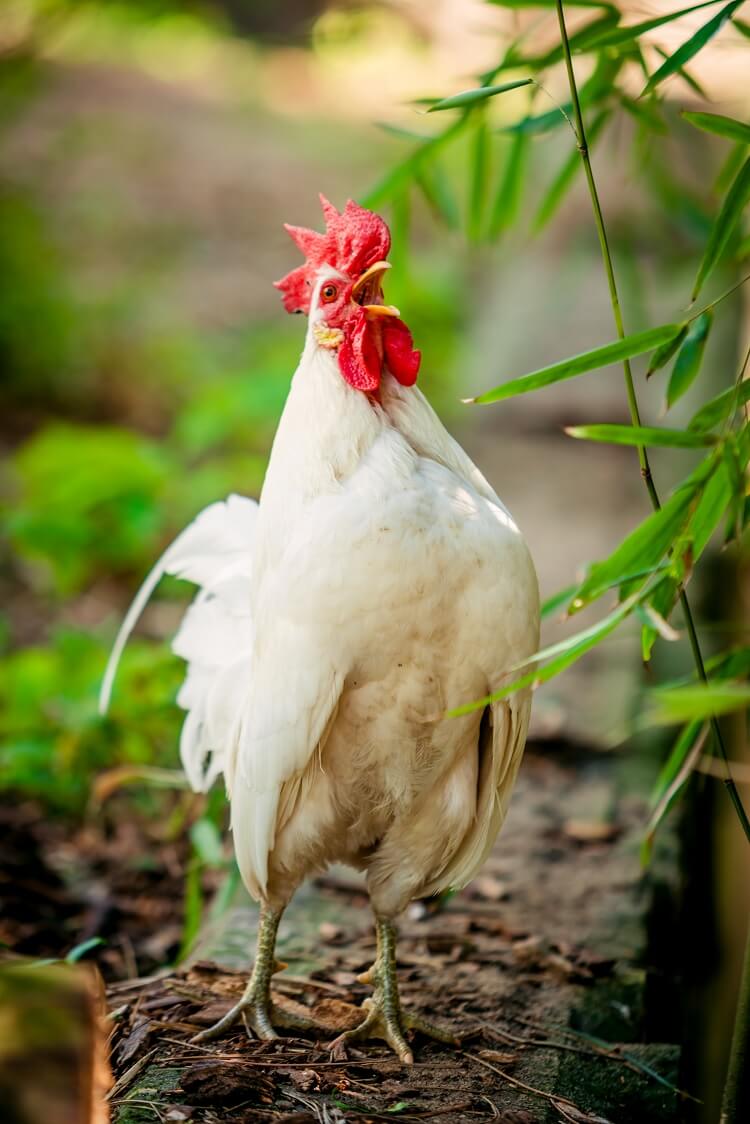 What To Do With Roosters That Can Not Be Tamed

All roosters can be taught to change their behavior.

It is just a matter of time and patience.

Sadly many people do not have the time and patience to understand their roosters, so you see ads like free to a good home. Animal shelters are usually overflowing with lost or discarded animals and roosters are not on many people’s shopping list when looking for a pet.

If you must rehome your roo then please do not advertise him for free. He may end up as cockfighting bait and that is not a happy ending.

Please do not release him into the wild as he will likely not survive. It is a cruel thing to do to a domesticated animal.

The ground rules for training your roo are simple: do not use cruelty or fear to overcome him.

It is not macho or clever to force an animal into submission. There is no place for cruelty in the treatment of any animal.

You should treat them firmly but never resort to hitting your rooster.

Getting to understand a rooster’s nature and his reason for being aggressive is extremely helpful. It will help you to challenge your own preconceptions of what he is and what you want him to be.

As hard as it sounds, training your rooster can actually be fun.

You will both get to know each other better, expectations and boundaries are established and if all goes well, you are both starting a new non-aggressive relationship.

Let us know how it goes in the comments section below…

Possums are scavengers and they will mostly eat carrion. They are part of nature’s garbage disposal team! Possums eat a wide variety of things that we consider to be pests or nuisances. Unfortunately they also eat chickens. However, they will rarely attack or go after Read More →

Cream Legbar All You Need To Know: Egg Color and Temperament

If you are looking for a chicken that stands out from the flock, then look no further than the Cream Legbar. This breed is best known for their beautiful pastel blue eggs and their distinctive appearance. Cream Legbars are a healthy and self-reliant breed that Read More →