The Ameraucana is a happy, friendly and sociable chicken that makes a perfect addition to your flock if you want light blue eggs.

They are good foragers and just love to free range.

As an added bonus they are relatively quiet and docile which makes them well suited if you have particularly close neighbors.

While they may not be particularly cuddly, they are certainly not aggressive or mean. 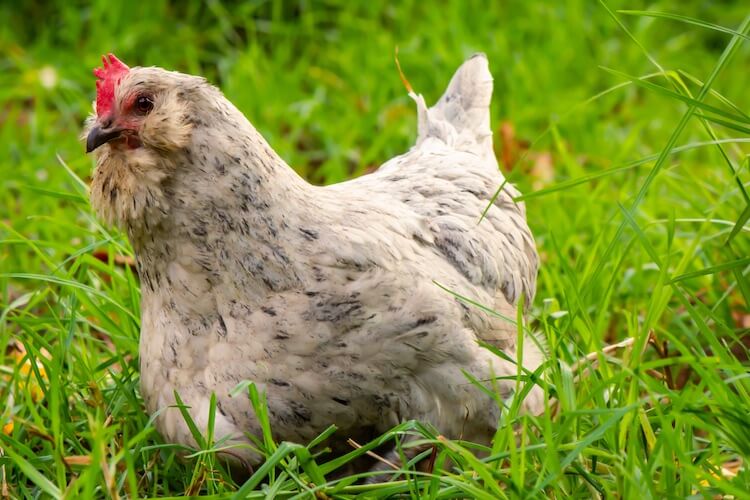 The Ameraucana was created from the Araucana and other breeds with the intention of removing problematic genetics.

They managed to succeed and also kept their ability to lay their famous pale blue eggs.

She is an independent chicken that likes nothing better than to free range and find her own food. However they will tolerate being kept in a pen.

These lovely birds are upbeat and love investigating new things.

Ameraucanas are well suited to family life and will tolerate small children and enjoy communing with their humans. However they do not necessarily enjoy being picked up and held.

Of course the biggest talking point about these chickens is their blue eggs. They are quite decent layers averaging about 3-4 eggs per week.

They can tolerate a wide range of climates and are especially suited to the cold having only a pea comb which rarely gets frostbite.

This breed comes in a variety of colors and their beards and muffs give them a very nice appearance.

The Ameraucana is a very pretty chicken indeed.

She is often confused with Easter Eggers and Araucanas as they are genetically similar.

Ameraucanas have a pea comb and wattles that are both red.

Interestingly their wattles can be almost non-existent on both sexes.

Their face is distinguished by a beard and muff which give them a sweet and fluffy look. To differentiate between the beard and muff you will need to look very closely at the bird.

She has a U shaped body that is quite compact, and you will notice their tail is held upright.

There should be no leg feathering and each foot has four toes – the skin color is white as is the sole of the foot. Leg color will depend on the plumage color as there are several different shades of plumage. It can be anything from a slate blue to black.

You can expect standard sized Ameraucanas to weigh 5.5lb for females and 6.5lb for males.

Bantams are tiny and weigh between 24-30oz.

With this beautiful breed there are several recognized colors to choose from:

All of these colors are accepted by the American Poultry Association.

However as breeders continue to experiment there are also several unofficial colors now available. 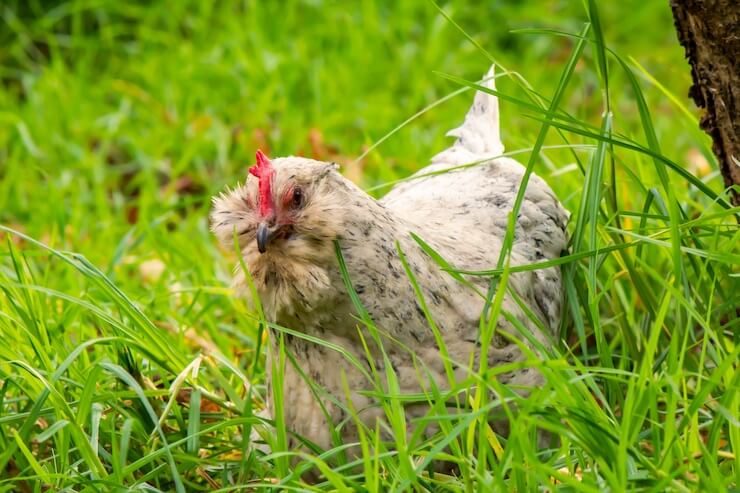 These chickens are fairly independent and love to free range.

Although they will tolerate confinement they will do much better if they can have access to range at least every other day. Whilst she is out ranging she is a friendly chicken that will be docile with other flock members.

She is a useful addition to your flock as she is a smart bird and will always be looking out for predators.

Of course one of the biggest reasons to keep this chicken is their beautiful blue eggs.

Ameraucanas are best described as friendly and inquisitive.

These chickens are cheery, laid back and sunny – they tend to avoid trouble if they can.

Their personality makes them suitable for families and beginners as they are not nervous or flighty. Whilst they do enjoy human interaction you should not confuse them for cuddly lap chickens.

You can expect them to be docile with other flock members and are usually about mid-level in the pecking order.

As for the roosters they seem to be more agreeable – although there are always exceptions to the rule. Although the roosters are known to be less aggressive than many other breeds care should still be taken when small children are around.

This comes out to somewhere around 200 eggs a year – a very good amount for a small family!

Whilst they lay all year round, you can expect them to slow down during their molt and the winter months.

You should know that she can be slow to start laying. Sometimes you might have to wait up to seven months before the appearance of any eggs, but the wait is certainly worth it.

Of course the real excitement about these eggs is that they are blue.

Unlike brown or tinted eggs (where you can actually rub off the pigment to reveal a white shell) blue eggs are blue all the way through. The blue coloring is laid down as the shell is being made, whereas tinted or brown eggs have the coloring applied after the shell is formed.

You can expect these hens to be quiet – with the exception of the egg song.

Even the roosters are quieter than other breeds.

You can tell when an Ameraucana is upset because they have a range of whistles, chirps and growls which they will use.

They really are ideal for an urban yard since they are much quieter than many other breeds.

Overall they are a robust chicken that can tolerate a wide range of temperatures.

As they have pea combs frostbite is rarely an issue with them. They fare well enough here in upstate New York with suitable accommodations and care.

If you are intending to show or exhibit your own then make sure that they are actually buying Ameraucanas. Some hatcheries will sell non-standard Ameraucanas or Easter Eggers and call them Ameraucanas.

A good way to tell is by pricing.

If you are paying around $5 per bird they are most likely not true Ameraucana chickens.

True Ameraucanas are around $18-$20 each, so buyer beware.

She is a vigorous and healthy bird with minimal problems of note.

They usually live until 7 or 8 years of age, but can live longer if well cared for.

Because of their muffs and beards, the most pressing problems this bird faces are parasites such as lice and mites.

As with all other chickens intestinal worms can also be problematic. Regular fecal testing and treatment will keep these problems away.

A standard 16% feed will be sufficient for these birds.

Personally I recommend a free feeding schedule for them.

As they love to forage this adds to their feed efficiency which in turn leads to slightly lower feed bills for you.

Just remember during the molting season it is wise to increase the protein content of the feed to 20% until they are feathered in again.

When you are setting up the coop the magic rule of 4 square feet for each chicken applies.

If they are allowed to free range daily then you can get away with slightly less, but more space is always going to be better than less.

For roosting space if you give them each 8 inches per bird you won’t go far wrong. All chickens will prefer to spread out a bit in the hotter months and cram together when it is cold.

The standard size of 12×12 inch for nesting boxes will do them just fine. If you build anything larger you will find a couple of hens will nest together and this will lead to broken eggs, so try and keep them separate.

As mentioned before this is a breed that likes to roam.

The Ameraucana does not do confinement well as they much prefer their freedom to roam. If you have to confine them make sure they have plenty of space and lots of perches and other amusements for them.

If you are going to keep them in a run then they should have a minimum of 8 square feet each.

You can add things like perches of differing height and boxes they can stand (or hide in) to increase the space available to them.

However if you can allow them their liberty a few times per week they will thrive on it. They are naturally curious birds and prefer to find their own food if they can.

She is also very predator savvy.

The history of the Ameraucana hen is complicated to say the least.

What we do know is that this is a relatively new breed – they were only accepted into the American Poultry Association in 1979 (bantam) and 1984 (standard).

Ameraucanas were created by breeding a South American bird known as an Araucana with several other breeds here in the US. The Araucana has some serious genetic issues that make them a very rare species. The fact that the Araucana lays blue eggs made it a fascinating project chicken to try and improve their overall viability.

Several specimens of Araucana were shipped to the US in the 1930s and work began on improving the breed.

The idea was to eliminate their lethal genes and retain their blue egg laying capability.

Whilst the breeders succeeded the chickens they created were a mixed bag. Some had ear tufts, some with none or one, some were rumpless others not, some had beards or muffs others none.

So in the mid 1970s the formal standard for the Araucana were drawn up and birds deviating from the standard were out of favor.

However a group of enthusiasts got together to improve and formalize some of the birds that were now not accepted as Araucanas. This was the beginning of the Ameraucana club although the name Ameraucana was not coined until 1979.

Interestingly even today in the UK and Australia, the Araucana and Ameraucana are considered to be the same breed regardless of some of the obvious visual differences.

All in all the Ameraucana makes a very nice addition to any flock.

Of course the main attraction is their blue eggs, however they have got so much more going for them.

They are a relatively quiet chicken so neighbors should not be bothered by the noise.

Also they are efficient foragers and will clear your yard of many undesirable pests.

Overall they are an easy going chicken that are aggressive, but not so docile that they get picked upon.

Do you have any questions? Let us know in the comments section below…

The Complete Life Cycle Of A Chicken Explained

The life cycle of a chicken is quite fascinating for most poultry fanatics! Just thinking that an egg can hold a tiny germ that in twenty one days can hatch into a beautiful little chick still amazes me. To think that this chick will grow Read More →