If you are looking for an unusual and special breed then you need look no further than the Araucana.

She is like no other chicken you have ever seen.

Raising Araucanas is a pleasure as they do not have any special care needs.

This little hen is suitable for backyards and homesteads and she will gift you blue eggs most days. 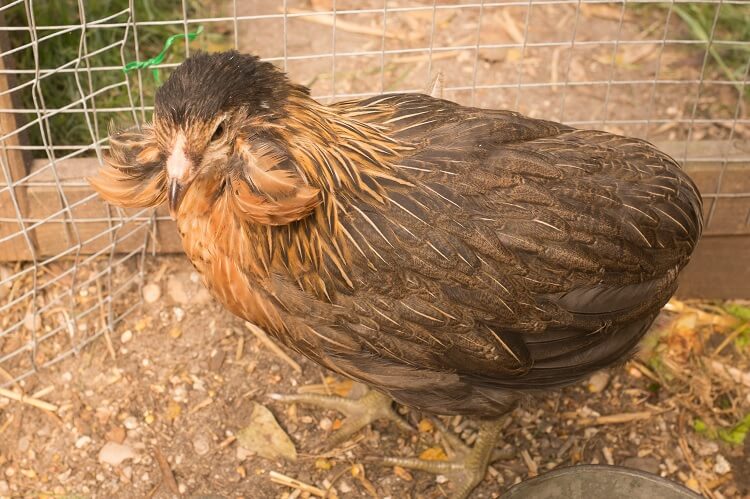 The Araucana is a very interesting chicken.

Their history is complex and there are differing theories on the exact origins of this breed.

While we may never know for sure their exact origin it certainly makes for a talking point among aficionados.

Having said all that this is a lovely hen to keep like the Buff Orpington.

They are friendly, inquisitive and tolerate children well enough.

Their popularity is in part due to the fact that they lay blue eggs. They are respectable layers giving up three light blue eggs every week. Occasionally they will lay a light green or even olive egg but blue is the predominant color.

If you are selling your eggs, blue eggs always seem to be a big draw even though there is no nutritional difference between them and other colored eggs.

With Araucanas it is better to keep a flock of them as they do better among their own kind.

However as they are placid you can also keep them with other breeds – so they are a suitable fit for a mixed flock too.

The Araucana is an unusual looking chicken.

When looking at their facial features you can be forgiven for mistaking them for an Ameraucana or Easter Egger as they have a similar small pea comb that is well suited for cold environments.

According to the North American standards (laid down by the American Poultry Association) they should not have muffs or beards.

However across the rest of the world beards and muffs are acceptable.

The real facial oddity that they always possess is ear tufts (or peduncles as they are properly known).

Moving on down the body the next outstanding feature is the lack of a tail. The Araucana chicken has no tail, coccyx or preen gland. Again this is a US standard while in the rest of the world Araucanas may or may not have tails.

The lack of a tail does not seem to affect their balance in any way and in fact probably makes the chicken harder for predators to catch.

You can see the difference between the European Araucana and the North American variety here.

Telling the difference between roosters and hens can be difficult as this breed does not have tail feathers.

The best indicator is the behaviors of the bird itself.

Hens are shyer and stick together at the back of the group and try to maintain a lower profile. Roosters will be bolder, stand upright out in front of the bunch and are more curious.

The final decision can be made around the seven to eight week mark when the boys will start to crow.

These chickens are best described as a standard sized bird – similar to a Barnevelder.

Hens will weigh in around 5.5lb with the roosters weighing 6.5lb.

There are also bantam Araucanas although they are quite rare. Bantam hens will weigh around 25.75oz (730g) with roosters weighing 28oz (800g).

As for their feather plumage it is widely variable.

It can contain whites, greys, browns, blacks and speckles. 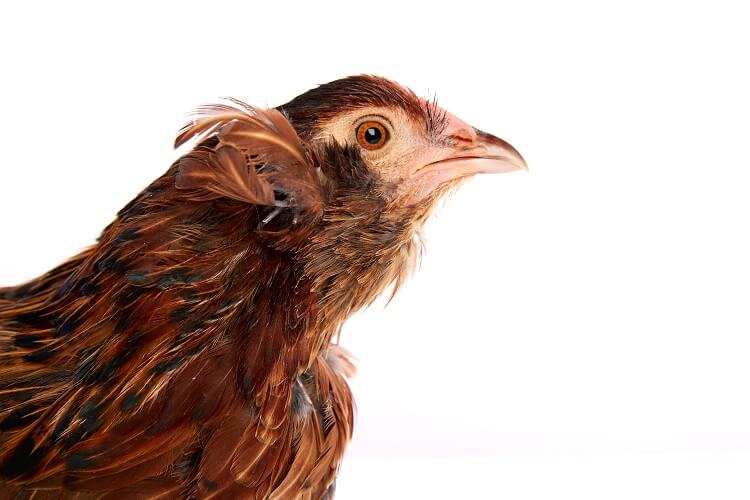 They enjoy scratching around in the yard and tend to wander a bit further than most other breeds.

She is quite predator savvy and will readily take flight if necessary.

If you want to stop your Araucanas travelling too far it would be wise to trim the flight feathers or keep the birds confined with aviary netting.

Their personality will depend on the exact strain.

Most strains are friendly, curious, docile and do well with children.

However some can be nervous and flighty.

While each bird is an individual the overwhelming sentiment seems to be that these birds can be very friendly if you spend time with them. If you raise them by hand they will be much friendlier than birds bought as pullets because they have had time to imprint on you.

They are curious by nature and love to investigate new things and places. As avid bug hunters they will eat ticks, worms, beetles and many other small garden invertebrates – they enjoy greens too so keep them out of your flower and vegetable gardens.

This can mean they wander further than the average hen and can get into trouble sometimes!

As an active bird they can and do fly short distances.

By providing them with enough space and perches and other activities they can do well in confinement but do not be surprised if they decide to have a short flight when you let them out.

Overall she is a good layer and will usually produce three medium/large blue eggs each week.

This averages to around 150 eggs each year.

Egg color can vary from a robins’ blue egg to a light green.

The blue coloring of the shell is both inside and out. It is caused by a pigmentation that is produced within the chicken. The whole process was initiated by a retrovirus that attached itself to their genetic code centuries ago.

You can expect them to start laying at around 20 weeks old.

Hens can be broody but this is not commonplace – it seems to be an individual trait rather than a breed trait. 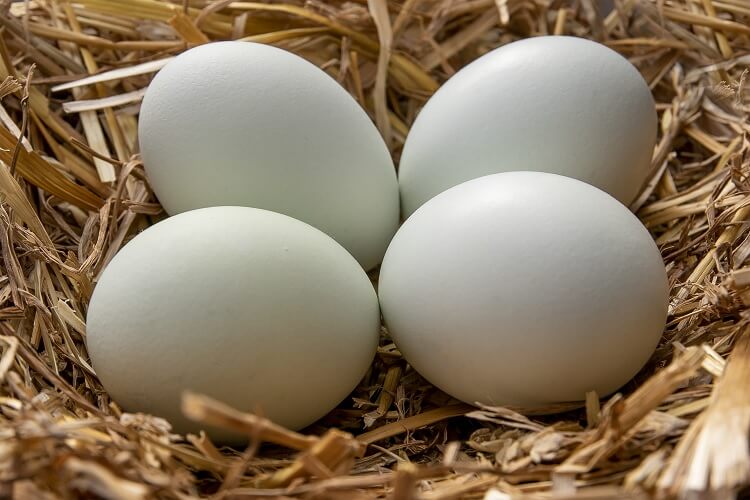 Generally speaking they are quiet birds.

The usual noise of the egg song, crowing and flock chatter is not at all obnoxious and should not bother neighbors too much. 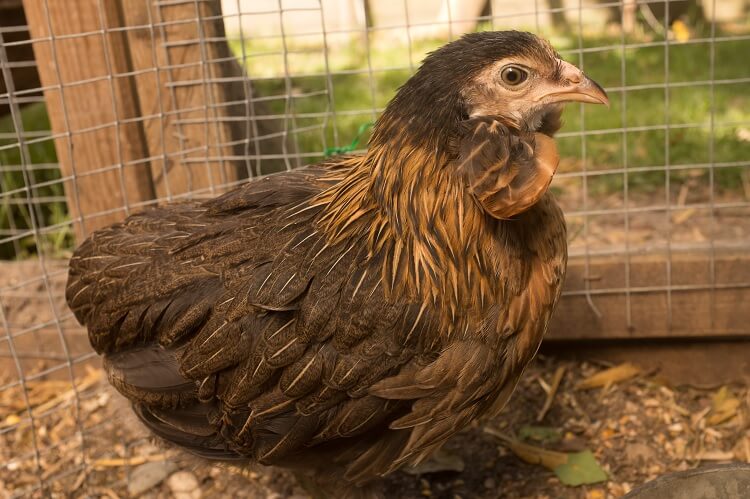 An adult Araucana is usually a healthy and robust chicken.

She can tolerate a wide variety of temperatures and climates and will thrive in cooler climates.

Chicks on the other hand can be very difficult to hatch out.

Unfortunately Araucanas carry an ear tuft trait that is linked to a lethal genetic anomaly.

However chicks that do survive are fast growers and very quick to mature into healthy adults.

Just like other domestic chickens they need a balanced diet to make sure they are healthy.

As chicks they will require a starter crumble of 20% for the first eighteen weeks.

This feed can be either medicated for coccidiosis prevention or not – it is your choice.

Once they reach eighteen weeks old you can slowly transition them over to a 16% layer pellet or crumble. As adults they should be offered oyster shell and grit in separate containers.

Although this breed is a touch on the small side they will still need 4 square feet of internal coop space.

Do not try to fit them into a smaller space as crowding can result in some pretty ugly behaviors (especially over the winter months). The standard eight to ten inches per bird will be enough for them although more space gives them the opportunity to spread their wings out a bit.

A nest box of the standard size (12×12 inches) will be suitable for them. Just make sure to provide one nest box for every three chickens.

This breed just loves to roam and will usually range a bit further than the average chicken.

They really are excellent foragers and enjoy nothing better than dining al fresco on the garden delights. She will gather a great deal of her nutrition from bugs and such which is reflected in a small but noticeable decrease in your food bill.

If you do have to keep them in a pen they will tolerate this providing you give them enough space.

Make sure each Araucana has at least 8 square feet of space in the run.

Also as they are flighty give them perches of varying heights to keep them happy in that department. You can also provide them with entertainment in the way of leaf piles, quiet areas and cabbage pinatas.

If they do not have enough run space and cannot express their natural behaviors you may end up with nervous and unfriendly birds. 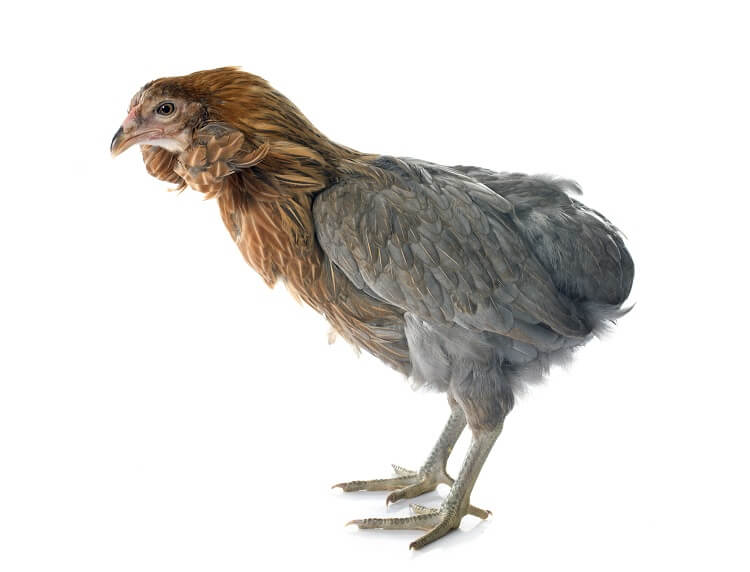 The history of the Araucana is somewhat confusing as there are several conflicting stories.

Let’s start with the most well known story of their origins.

In 1914 Professor Salvatore Castello from Spain visited Chile and while there he was introduced to the Araucana or Mapuche chicken (as it was known then).

The man that introduced him to the chickens was Dr Bustos a well-known South American chicken expert and breeder.

Dr Bustos had been experimenting with a mix of local birds and had developed the Araucana as a cross between the Collonca and Quetros chickens of Chile.

The Collonca is a rumpless bird that lays blue eggs while the Quetros chicken lays brown eggs but has ear tufts. Apparently Professor Castello thought that the Araucana was a breed rather than a strain of bird and so the Araucana was described as a breed when they were introduced to the world in 1918.

If you go further back in time the story becomes even more confusing.

Apparently during Colonial times the Dutch settlers introduced a rumpless bird called the Persian Rumples to the local Indians who liked the bird and quickly incorporated them into their flocks.

In yet another version it is believed that the ancestors of these birds were brought across the Pacific Ocean by the Micronesian islanders and that the Colloncas and Quetros share genetic ancestry with the Rapanui chickens of Micronesia.

Originally from South America the Araucana is certainly an odd looking chicken – they are special birds in many ways.

They are good layers and as heritage birds should lay reasonably well into their third year at least.

She is also an active forager and enjoys independence but still has time for their human friends.

Due to their genetic issues it is probably best to get your hens from at least two unrelated lines if possible.

Overall this is a rare breed that is in need of some sponsors to keep the lines going. Are you up to the task of keeping Araucana chickens?

The Leghorn has an outstanding reputation as a reliable egg layer. We will never know for sure about the true origins of this hard working Italian chicken but without her the egg industry would not be the same. This egg laying super star changed the Read More →

If you are just getting started with chickens then one of the first things you need is a chicken coop. A good chicken coop is worth its weight in gold as it will keep your chickens safe and warm. However, chicken coops can come with Read More →

The Salmon Faverolle is a delightful hen to add to your flock. They are friendly, funny and lay beautiful large eggs. Faverolles are the barnyard clowns and their antics will make you laugh out loud – especially when they get into a discussion with you! Read More →