The Ayam Cemani is an unusual chicken to say the least.

They have been called the Devil’s chicken because of their all black coloration. In their homeland they are revered because it is thought they have magical powers!

Cemanis remained virtually unknown to the west until the 1990s.

Since then they have become something of a success story and a unique bird to own.

We are fortunate in the US to be able to own one of these chickens. There are still several places in the world that are unable to import this lovely bird.

Keep reading to learn more about this unique and unusual chicken… 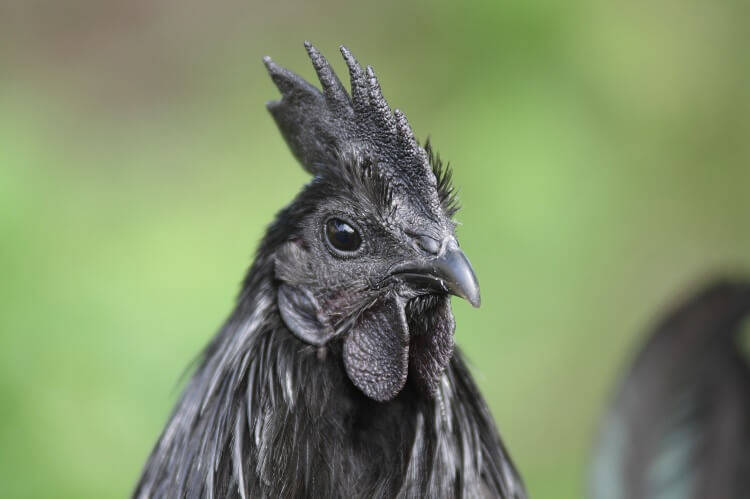 Meet the all black chicken.

There is not a speck of color to this bird just uniform black. However their feathers display a stunning iridescence of green and purple in the sunlight.

The Ayam Cemani is a fibromelanistic chicken which means that everything is black: feathers, skin, muscles and bones.

Their blood is the only thing that is not black.

In their homeland they are treated as a magical being. They are thought to be a good luck charm that fights off evil. They are also supposed to bring good fortune and peace of mind to their owner. Sadly this also leads to them being sacrificed in mystical rituals to protect people and villages.

Here truly is a chicken with no counterpart. They are well established in the US, UK and Europe but not yet Australia.

This black beauty is for the folks who want something different in their flock.

They are poor egg layers and are generally kept as novelty or exhibition chickens like Silkies.

If these otherworldly birds have caught your imagination then be prepared to part with a considerable amount of money.

Expect to pay around $200 for unsexed chicks from good quality stock. 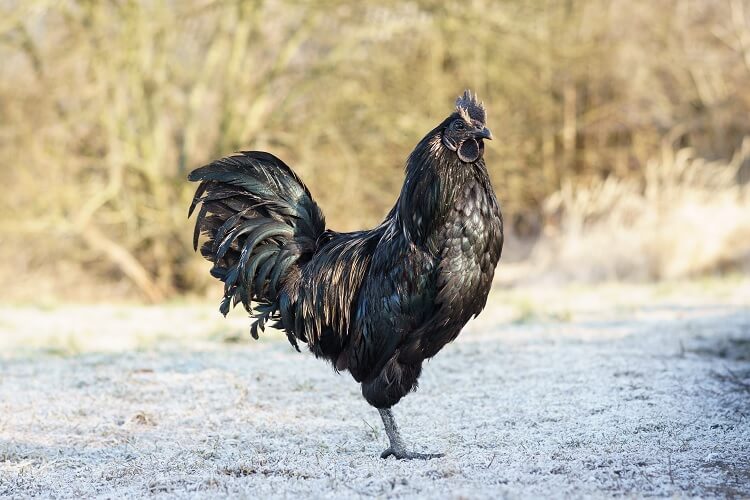 This is an all black fibromelanistic chicken.

This is a small but muscular and well developed chicken. Their body is upright and their legs should be clean of feathers. As Ayam Cemani are a gamebird their feathers should be tightly packed. In the sunlight these black feathers show a beautiful green and purple iridescence.

Their eyes and even their beak is black.

The rooster’s head is held high and has a well-defined single upright comb and large wattles (all in black). Whereas hens’ combs are smaller and wattles are small to non-existent.

Roosters will stand more upright and be more inquisitive than the hens. Hens tend to stay low in posture and keep to the background being less noticeable than the males.

The Ayam Cemani is considered a standard sized chicken although they are a touch on the small side.

There is no bantam equivalent.

There should be no deviation from black.

Only totally black chickens would be considered to meet the Standard of Perfection for show purposes. The depth and shading of black should be total with no hint of red or other color bleeding through.

Birds of inferior quality often show some bleeding of red in their feathers, comb and wattles. 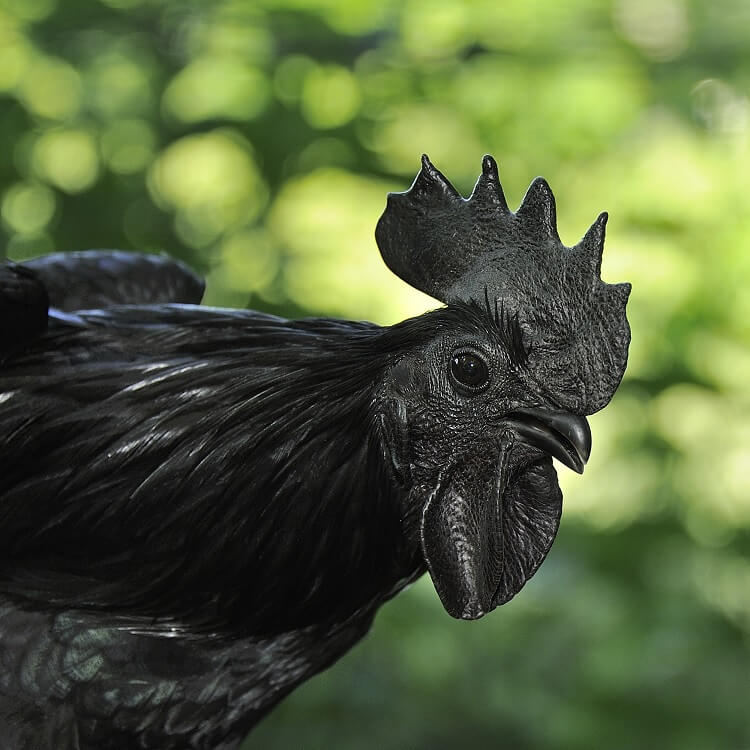 This is an active chicken that enjoys roaming.

If you have to keep them penned you should make sure they have lots of space and perches. However they would really prefer to free range and will benefit tremendously if they can wander.

They require little in the way of maintenance apart from the usual concerns of food, shelter and protection.

Overall she is a quiet bird yet busy chicken that is best kept in a flock of her own kind.

Although they do have gamebird ancestry they are not considered to be flighty or problematic to handle.

The Ayam Cemani is best described as a gentle, confident and low maintenance chicken. As they strut around your yard they will appear supremely confident and self-assured. This is a chicken that loves to roam so you will see them free ranging and picking at seeds, bugs and greens.

Whilst they are very easy to handle you should not expect them to act as a lap chicken. They do not care to be lap chickens but will tolerate being picked up and held for short periods of time.

They are docile and not particularly assertive in the pecking order, but since good quality stock is incredibly expensive you probably do not want to keep them with other breeds.

With this breed you can expect poor cyclical egg laying.

This means they will lay 20-30 eggs then go off lay for an extended period of time. It can be anywhere from 3-6 months before they start the cycle again.

If you want a prolific egg layer the Ayam Cemani is not it. Read our article on 13+ best chickens that lay lots of eggs for more ideas.

The fact that they are not good layers is one of the reasons the price of a bird is so high.

Whilst they are not overly noisy the roosters do have a very distinct crow.

It is so distinctive and carries so well that in their homeland of Indonesia they were commonly used as a foghorn or warning on the fishing vessels.

Hens on the other hand are fairly quiet and will only mark a noise if they are startled. 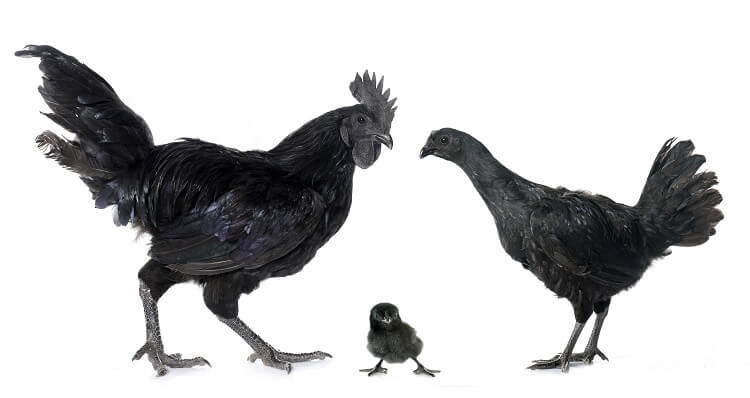 Ayam Cemanis are a healthy breed and you will be hard pushed to find anything about health issues for this bird. Their gene pool seems to be quite extensive with large reservoirs of birds held in Europe, US and of course Indonesia.

Also as their combs are so big, watch out for frostbite in colder climates.

They will need slightly higher protein when molting so switching up to 20% during these times will be sufficient.

Also if they can free range they will hunt up extra protein and other goodies to supplement their diet. 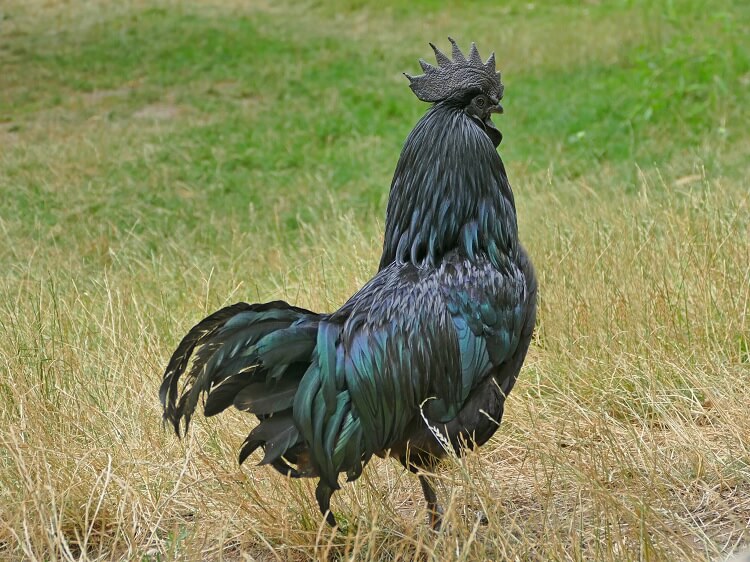 Although they are fairly small they are still considered to be a standard size, so each chicken will need 4 square feet of coop space. If you have a particularly large run or they are allowed to free range you can give them slightly less coop space.

As for roosting space, each will need 8 inches.

More room is better as they will likely spread out more in the warmer months and huddle together when the weather turns colder.

They do not require anything special for the nesting boxes.

A ratio of one box per three chickens is recommended although you will probably find that everyone wants the favorite box at the same time.

If you are keeping them in a run/pen they each need at least 8 square feet. This will give them enough space to exercise which also helps to reduce any antisocial behavior.

You can also set up perches in the run. This helps to give variety to the birds and a place to escape from the rest of the flock if needed.

Whilst they will tolerate being confined to a pen they truly thrive when allowed to free range.

They are an active and busy bird so if you have to confine them try to make sure they have plenty to occupy themselves. Even if you can only free range them for a couple of hours each day, they will appreciate the freedom. 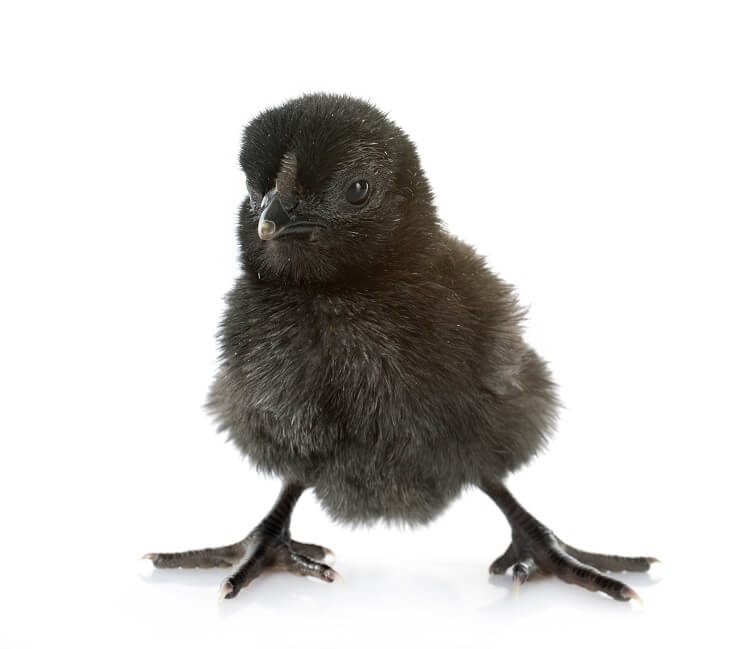 The history of the Ayam Cemani is imprecise at best.

As mentioned in the introduction this breed was only recently discovered in the west. Although they have been known in the East Indies for a long time.

The chicken can trace some of its ancestry back to the Kedu chickens of Java.

It is also possible that some of their genes can be traced to the Ayam Bekisar chicken from the Javanese islands. It has been suggested that the bird originated on the island of Sumatra but there is no hard evidence of this.

One thing that is certain is this breed has never been a common folks chicken.

They have always been raised by the wealthy people or by village shamans for its alleged healing properties.

This breed is thought to be a good luck charm, adept at fighting off evil spirits and spells and capable of communicating with the dead. In their homeland of Indonesia they are treated reverently and used in magical ceremonies.

According to Cemani Farms there are three different strains of the Ayam Cemani.

The difference between them is very difficult to see unless you have a lot of experience dealing with these birds.

They were imported to the West in 1998 by a Dutchman known as Jan Steverink and since then has exploded in popularity.

Most people keep these chickens for their memorable appearance.

They really cannot be described as a good homesteading bird as their egg laying is poor.

However if you are in the market for selling rare chicken breeds you certainly can command a good price for these chicks.

You will likely have to wait for your Ayam Cemani as top breeders have waiting lists that are usually fully booked for at least 6 months ahead.

Did you manage to get one? Let us know in the comments section below…

Today’s chicken subject is the ISA brown hybrid chicken. She is one of the darlings of the poultry industry because she is such a prolific egg layer. However in recent years the ISA has made her way into many backyard flocks by way of rescue Read More →

Complete Guide To Hatching Chicks With A Broody Hen

Broody hens are incredibly useful for hatching and raising chicks. They do far better than any incubator and you do not have to fuss around with temperature or humidity settings. Your broody will do all of this for you without a science degree! She will Read More →

Are you looking for a beginner-friendly duck that will lay lots of eggs? Well, look no further than the Khaki Campbell! These independent ducks are excellent foragers and will spend most of their time waddling around your backyard looking for their next meal. They can Read More →