The Brahma is known to many as the King of chickens!

Buff Brahmas are a color variation of the regular Brahma and they are certainly eye-catching.

This low maintenance breed is a pleasure to have around.

She is well suited to backyards and can be kept with other breeds as she will not squabble with them.

Are you interested in keeping this breed? Keep reading to learn more about them… 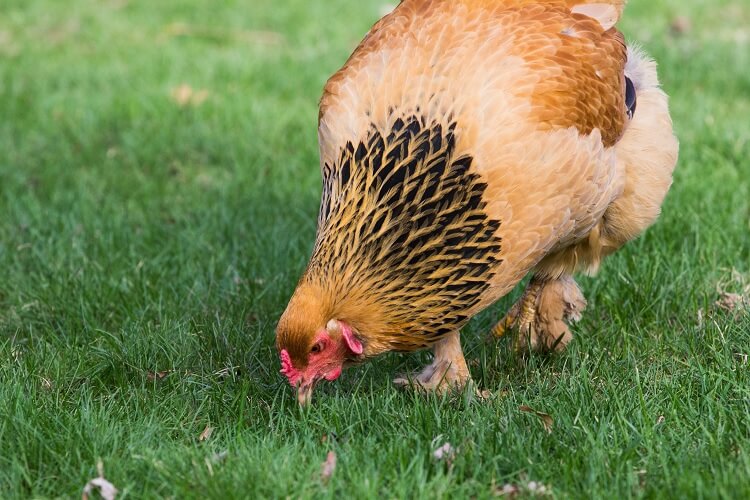 The exact origin of the Buff Brahma is much debated.

What we do know is that they made their way to the US via the UK back in the 1800s.

These chickens are a very gentle and docile breed. They are well suited for a family and their docile nature makes them good pets too.

They are reasonable layers of large brown eggs.

You may have seen videos of huge Brahmas lumbering around the chicken yard. However Brahmas of that size are relatively uncommon and most stand at around eight to eighteen inches tall.

They are a favorite showroom or exhibition bird because they are so calm and easy to handle.

However recently they have become a popular backyard chicken too.

These graceful and placid hens will lay through the cold winters when the other hens have packed up for the winter. 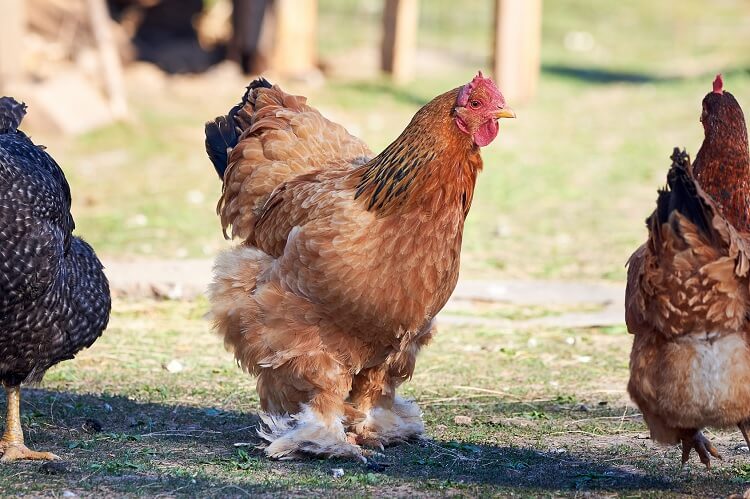 The Buff Brahma is a large chicken.

Not only is this breed heavy but they are also tall.

Their head is large and broad with a brow that protrudes over the eyes – this is known as a beetle brow. Their comb is a pea style making them very practical for colder climates.

They have broad shoulders but despite that they are poor flyers. When seen from the side they give the appearance of a V shaped bird.

As for their plumage it is smooth and has lots of dense under down. Their legs and feet are feathered and each foot should have four toes.

The light and dark Brahma was admitted to the American Poultry Association in 1874.

It was not until 1924 when the buff variety was admitted to the APA.

Visually it is hard to tell the difference between Buff Brahma roosters and hens.

The usual behavioral points to note are roosters are more curious and forward, whilst the hens keep a lower profile and are not as bold as the boys.

As they get a bit older the males comb will get slightly larger and the hackle feathers will become more pointed.

However as Buff Brahmas are slow to mature you may not be able to tell the difference for some time.

As for height they can reach thirty inches tall however the average size of a Brahma is between eight to eighteen inches.

Bantams are available and they stand about six inches in height however they are difficult to find.

The buff Brahma only comes in buff.

However there are other color varieties of the Brahma. The three recognized colors in the US are:

What Is It Like To Own A Buff Brahma? 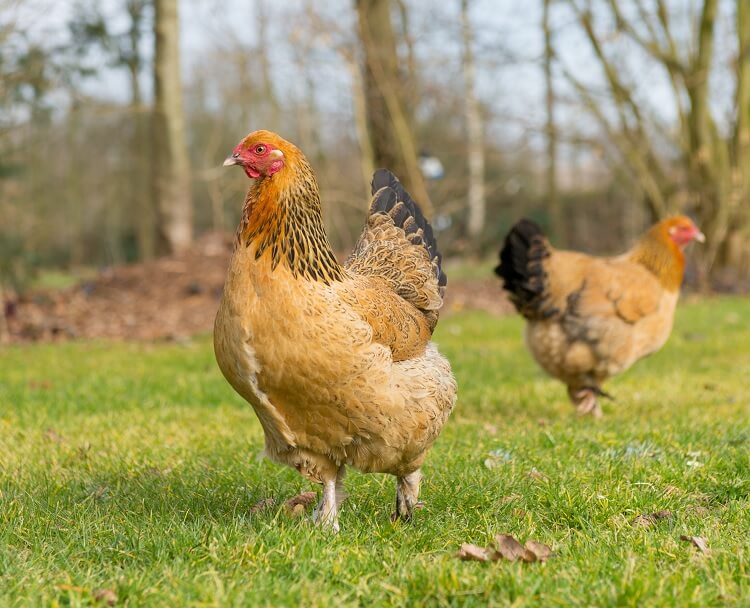 Buff Brahma enjoy being active and foraging around the yard.

If you let them free range they will find a substantial portion of their nutritional requirements on their own.

Since they are heavy feeders this will help to keep their feeding costs as low as possible.

When foraging they prefer to stick near to home so you will not have to go searching for them!

It is worth noting that because of their dense feathers, the Brahma is not suitable for southern climates as when the temperature rises they can suffer from heat stress.

They are well suited to small homesteads.

Buff Brahmas are very calm chickens like Silver Laced Wynadottes and do not often attack people or other chickens.

Their disposition is gentle, calm and friendly (even the roosters are not aggressive).

Those that keep Brahmas in their flocks will tell you that these chickens do not bicker or quarrel with themselves or other chickens. They rarely get picked on by other birds – this is because of their size not because they are mean or aggressive.

However a Buff Brahma’s size can be intimidating for children.

Given time children will warm up to them and with enough encouragement they will become lap chickens. 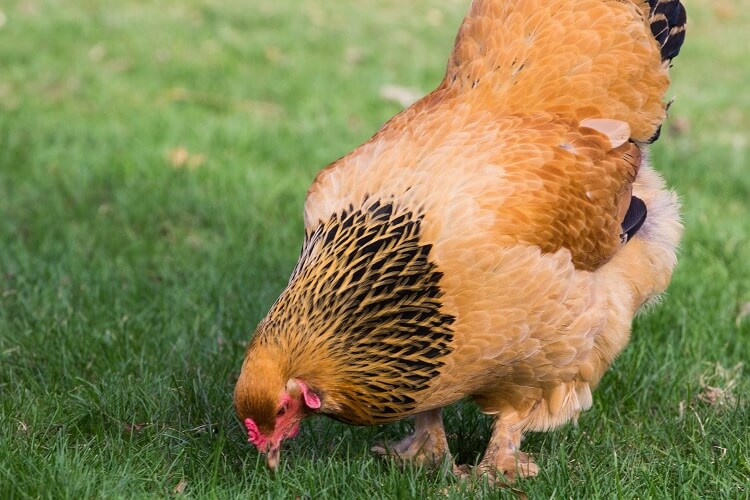 These hens lay around three large brown eggs per week – this adds up to a yearly output of around 150 eggs.

Also they tend to lay through the winter when the other girls have stopped laying.

You can expect them to reach point of lay around five to six (20-24 weeks) months of age.

The hens vary in broodiness but some girls do tend to get a bit broody in the mating season. They do make good broodies for hatching eggs and are good mothers to the chicks.

Brahmas are quiet chickens with the usual exceptions of the egg song, crowing and alarm calls. This makes them ideal for not only rural but urban settings as they should not disturb your neighbors.

They are not fussy or easily startled and tend to be calm and peaceful. 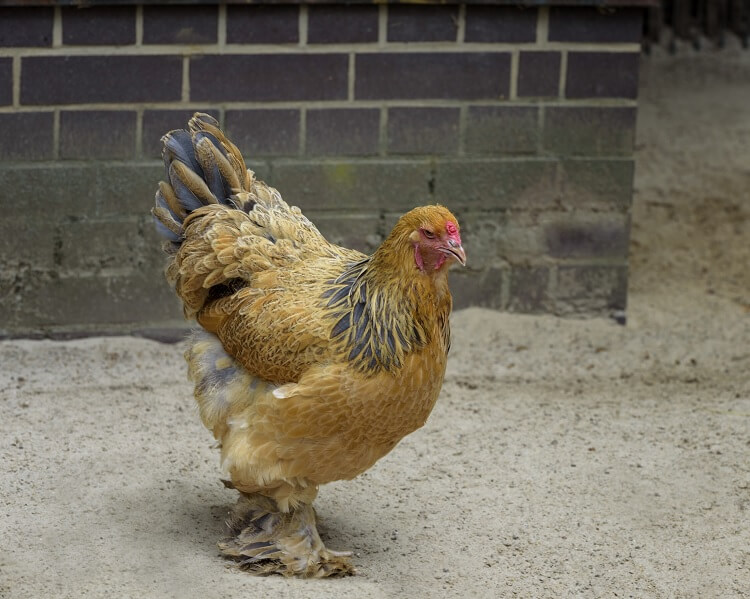 The Buff Brahma is a healthy and robust breed.

The usual concerns of lice, mites and ticks are ever present. Brahmas are heavily feathered so they will need to be checked regularly for parasites. Whether or not you treat your chickens on a schedule or on an as and when basis is your choice.

There is no right or wrong way just whatever works best for you and your schedule.

The only unusual concern is their feathered feet. This means scaly leg mite can be a problem if not monitored so make sure to watch them closely.

Care needs to be taken with their feet.

Mud and ice can build up around their toes leading to mud or ice balls which can in severe cases lead to loss of toenails or even digits.

Make sure that they are kept free of mud.

Good quality feed is essential for your Brahmas.

For chicks you will need 20% crumble for the first several weeks until they are at the point of lay.

Once they are sixteen weeks old they can be transitioned over to 16% layer feed – crumble or pellets is your choice.

In addition to their feed Buff Brahmas will need separate bowls for oyster shell and grit.

In the summer months you can add vitamins and electrolyte powder to their water to keep them in good shape.

As they are big chickens you need to give them plenty of space.

Each Buff should be given at least six square feet – eight is ideal.

You may have to modify your coop a little to accommodate these chickens. They can reach thirty inches in height so they are going to need a bigger door too. If you think in terms of a turkey sized doorway (12×14 inches) you will be in the right size range.

As for perches they each need twelve inches.

Also because the Buff Brahma is so big and heavy, the perches should be lower to the ground to prevent foot or leg injuries from jumping down.

The standard sized boxes are going to be a tight fit.

A twelve inch depth and height with a fourteen inch width will do nicely.

Like most chickens, the Brahma loves to free range.

They are good foragers and enjoy tidbits from the garden. Also as adults their size usually acts as a deterrent to most aerial predators.

However if you are going to keep them in a run then they will tolerate confinement very well as long as they have enough space.

An area of ten to twelve square feet per chicken is suggested – of course more is better.

As they are poor flyers a three foot fence will be enough to pen them in an area. 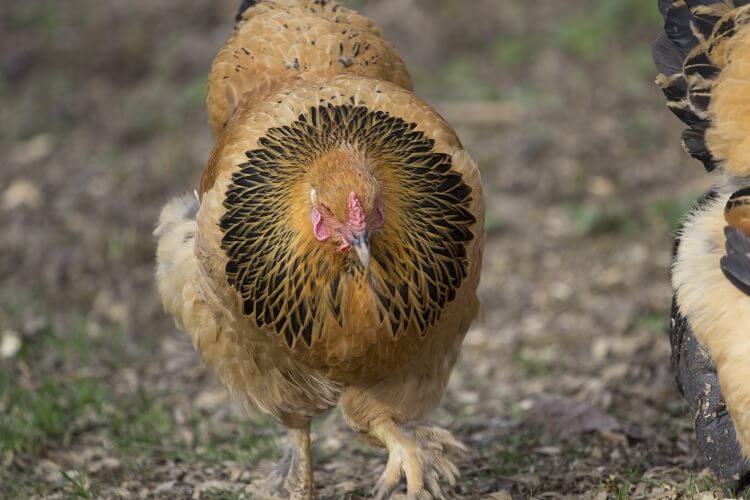 As with many old heritage breeds the exact genetic makeup of this breed is a bit murky.

They were first introduced to the Western world in the 1840s.

The first chickens were a gift to Queen Victoria who was an avid poultry keeper.

At this point they were known as Shanghais because that was the port from where they originated.

It is likely that there was some genetic input from the Chittagong birds of Malay origin.

There were many different varieties of Shanghais and in 1852 there was a concerted effort to draw up a standard and a name for these chickens.

This new standard breed was known as the Brahmapootra – named after the principal river of the area in Bangladesh where the Chittagong came from. It was during this time as well that the buff variety was created.

They were accepted into the APA in 1924.

The Brahma was the principal meat chicken in the US from the 1850s to the 1930s. However when industrial farming started in the 1940s the Brahma was discarded as too slow to put weight on and did not lay enough eggs for the industry.

Although the present day Brahma can weigh around twelve pounds, in the past it was not uncommon to have birds that weighed up to eighteen pounds.

Fortunately these days they are popular as backyard chickens and the Livestock Conservancy lists them as a recovering species.

Buff Brahmas are lovely chickens suitable for both rural and urban living.

If you are able to add one or two hens to your flock they will keep you in eggs over the winter period when other breeds are resting.

You should remember that because of their size they do eat a lot (especially through the winter months).

Even though these hens are slow growers they really are worth the wait.

They are quite beautiful birds with a proud demeanor and a royal walk.

Are you going to bring this royal chicken into your flock? Let us know in the comments section below…

Candling eggs is one of the most exciting parts of hatching chicken eggs. It is also one of the most important. Candling was once done with a candle but these days most people use a flashlight. Egg candling is a simple way to monitor the Read More →

12 Reasons You Should Not Get Backyard Chickens

This article will take a semi-serious look at why you should not get chickens. Most of this will be fun but there are a few genuine reasons why you might want to think before you get backyard chickens. Sometimes folks can be disappointed to learn Read More →

The Muscovy duck is very different from other ducks. Although they are a waterfowl they prefer to spend their time roosting up in trees that are far away from predators. On a homestead the Muscovy has much to offer, including eggs and great pest control. Read More →