You may be surprised to learn that chickens have quite a large vocabulary.

Apart from their standard “cluck cluck”, they have several other sounds that they make and all of them have a specific meaning.

While you may not be able to talk to your chickens like Dr. Dolittle, after reading this article you will be able to understand the meanings of their sounds.

It can prepare you to look for predators, or eggs, depending on the noise made.

This article is going to help you differentiate between the sounds and what the meaning behind them is. 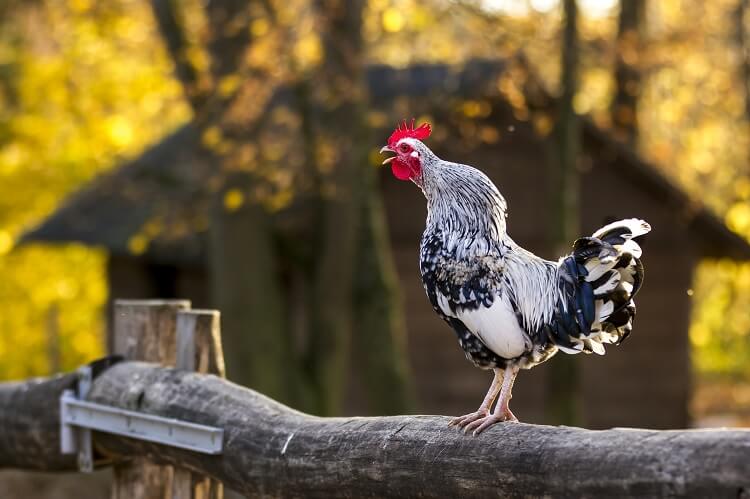 There has been lots of interest and research into chicken language over the years.

The first research was conducted in the 1980s by Nicholas E. Collias. This research became the building block for further research into chicken talk and cognition.

Since then more than 24 sounds have been discovered and understood.

Much more recent research at Macquarie University in Australia has uncovered not only chicken talk but cognitive abilities as well.

Below we are going to share with you the 12 most common chicken sounds you will hear from your flock and what they mean.

If you have ever listened to a flock of hens as they free range across the yard, you will likely have heard a low murmuring between them all.

This murmuring is thought to have two meanings:

They will all range within earshot of each other because there is safety in numbers. Some chickens will also purr in contentment (especially those that are petted on a regular basis). And you thought only cats’ purred!

The second most common sound you are likely to hear is the alarm cry.

In the wild chickens needed some sort of early warning system to warn each other of danger.

There are two different alarm calls that tell the chicken where the danger is: ground or air.

The first is a repetitive clucking that becomes faster, louder and more persistent as the danger approaches. Whether it is a cat, fox or snake the alarm will be raised so that all birds can take cover or flee.

The second alarm is the air raid warning. This is more of a scream or shriek – the meaning is quite clear: “take cover there is a hawk”.

Hens will either run for cover or freeze in place.

Flocks rely on the rooster or head hen to keep an eye to any danger to them. Interestingly if a rooster starts giving false alarms too often, the ladies will ignore him and rely on other flock members.

Since chickens eyes and ears are more powerful than ours, they are usually right.

If you have not heard the egg laying song then you do not keep chickens!

It is a loud “buk, buk, buk, ba-gawk” with emphasis on the ending.

If you have a few hens in the coop laying at the same time it can get quite noisy. It is almost like a cheering committee to encourage the laying of the egg followed by raucous congratulations.

There is a similar sounding “buk, buk, buk” that is loud and persistent which is used by some hens when their favorite nest box is occupied.

The complaining hen will strut up and down outside the occupied box clucking.

It is a protest with the intention of intimidating the occupier to vacate the nest. This rarely happens and sometimes the complainer will try to move the sitter out by cramming into the nest box with her.

Broody hens are bad tempered and hormonal until their chicks hatch!

They will not give up the nest box to anyone.

If anyone (or thing) approaches the nest box they will hiss and growl.

A broody hen rarely leaves her nest. When she does she puffs herself up, growls at everyone in her way and will literally hiss if she is challenged.

All other flock mates will give her a lot of space while she is broody.

Roosters will sometimes try to find a good spot for a particular hen to have her nest. He will trample and rearrange the bedding clucking all the time.

He will present the nest to her for inspection. If she likes it she will nest there, if not she will walk away.

Once a broody hen has settled into the routine of sitting on her eggs, she will start to coo and murmur to the unhatched chicks.

She is starting to bond with the chicks by talking to them while they are still in the shell.

You might hear them peeping back to her just before they are ready to hatch.

When the chicks finally hatch and are starting to move around, the mother hen will entice her chicks to eat with a “tuk, tuk, tukking” noise. This verbal cue lets the chicks know that this food is ok to eat.

As the chicks are now moving around they must learn the safety rules. The Mother hen has two distinct calls to bring the chicks back to her in the case of danger or uncertainty. The first is a low pitched clucking, this means the chicks should stay near Momma.

The second sound is a “rrrrrrr” sound. When chicks hear this they will run to Momma for cover or to the nearest hiding place available. They will remain still and quiet until she lets them know it’s ok. 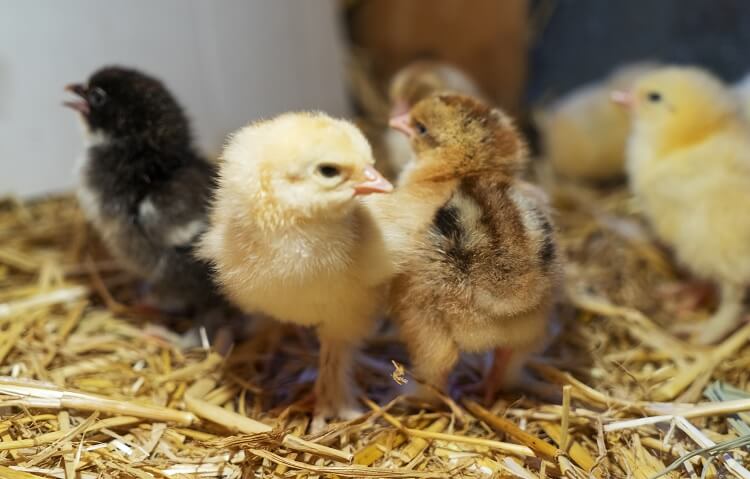 Young chicks do not have too much of a vocabulary but they can let you know how they feel by chirping.

There are five distinct ways in which a chick can chirp:

Crowing is usually done by the rooster, although there are occasions when hens can crow too.

The first crow of the day is dictated by his circadian rhythm.

This wake up alarm means it is time to get up and hunt up some bugs. He crows to let everyone know this is his territory and his ladies.

If you have several roosters then there will be a crowing order. The first to crow is the head rooster and no other roosters can crow before he does.

Once he has crowed then the less dominant roosters will crow in order of seniority. 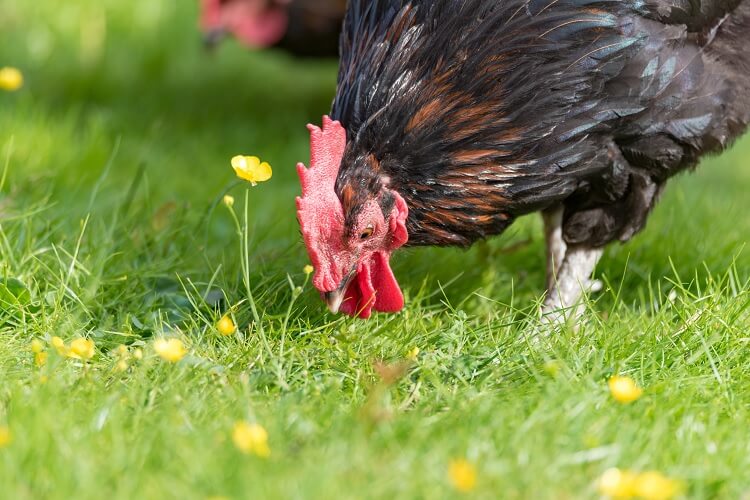 One of the roosters main jobs is to hunt for tasty food for his hens.

Once he has found something he will announce it with a “tuk, tuk, tuk” call that is similar to that used by a mother hen.

After the ladies are done eating he will eat the leftovers (if there are any).

Lots of roosters will do a kind of “roll call” in the evening.

They will stand near the coop entrance calling until all the hens are safely inside.

Not all roosters do this – mine do not (perhaps he relies on me to do the head count). After I have done the head count I will tell them goodnight and some will answer with a soft clucking.

This is not a frequent call you will hear.

However sometimes when a hen is free ranging by herself and wants some company, she will call loudly and insistently for the rooster.

He will race over to see what is wrong and accompany her for a while before returning to the main flock.

I have one Rhode Island Red who does this.

How loud are chickens?

A barking dog and a rooster crowing both roughly make around 90 decibels of noise.

Laying hens produce around 60-70 decibels (approximately the same as a loud human conversation).

Are certain breeds louder than others?

There are quiet breeds that do not make a lot of noise such as Australorps and Barred Rocks. Then there are the girls who cannot be quiet: Rhode Island Reds and Cornish.

Roosters will crow all day long, but can hens crow? Only hens that have some sort of hormonal imbalance have been known to crow – this is rare.

How long do roosters crow?

Most roosters crow for about five seconds or so

However certain breeds are long crowers and can crow up to 40 seconds!

Chickens have arounds thirty sounds that they can make to communicate with each other constantly and form social bonds.

The absolute best way to learn how to speak chicken is to spend time with your flock, listen to them and talk to them. Some are more talkative than others but even the shy ones will respond if you give them some one-on-one time.

I try to make a point of talking with my quiet girls each day.

It is a good way to observe them and gives you a heads up if something is wrong.

So the next time you visit your ladies, talk to them. Listen to them and you may be surprised by what you learn.

What did you hear from your chickens? Let us know in the comments section below…

Which Chickens Are Laying Eggs? 3 Sure Ways To Tell

All hens are born with their lifetime supply of eggs inside them. Some of your chickens may be doing a great job of laying eggs, while others may be lounging in the nest box and not producing a thing. So how do you tell which Read More →

Chicken Coops: What To Know Before Buying

A chicken coop is probably the most expensive item you will buy for your hens. With coops costing anywhere from a couple hundred to a couple thousand dollars there is a great variety of quality out there. So spending your money wisely is very important. Read More →

Can Chickens Eat Pineapple: What To Know Before Feeding

Lots of people love to give fruit and table scraps to their chickens. But not all foods are safe for chickens to eat. You may be wondering, can chickens eat pineapple? The short answer is, yes. However, pineapples are acidic and very high in sugar Read More →