Double yolk eggs are certainly a talking point for most people!

Two yolks in one egg is an oddity for sure but a pleasant thing to find in the egg box.

In certain places double yolk eggs have become something of a high-end expensive novelty catering to a small market niche who can afford to pay for these rarities.

Whereas here in the US these eggs are categorized as deformed and are not knowing sold to the public.

In this article we discuss everything you want to know about double yolk eggs, including: why they occur, how it happens, the odds of it happening and much more… 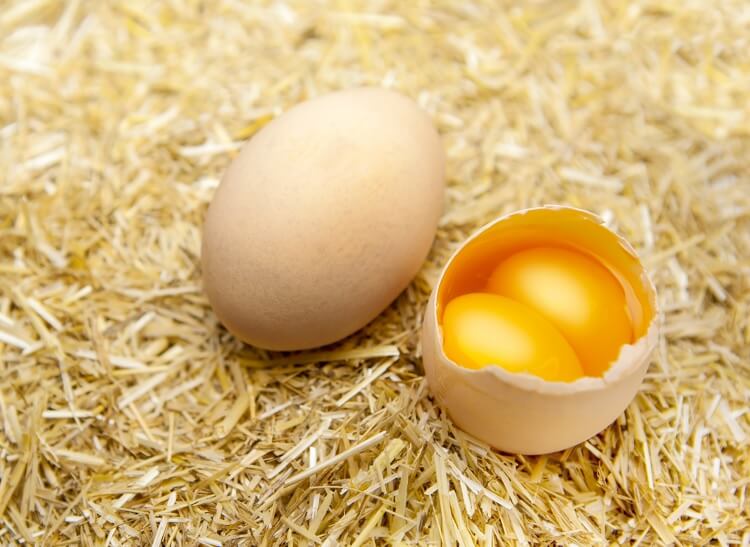 Why Do Double Yolk Eggs Happen?

Their egg machinery is not quite in sync yet and multiple yolks are one of the possible outcomes.

Normally chickens will release one yolk from their ovary into the reproductive tract, then another yolk will be released somewhere between 30–70 minutes after the previous yolk.

However when young pullets are coming into lay, sometimes their reproductive system is not quite ready to produce eggs. Getting the daily egg out is all about timing and a slight hiccup can throw everything out of balance.

When the yolk is released from the ovary into the infundibulum, occasionally a second yolk is released at the same time or very close to the previous one. These two eggs travel down the reproductive tube close together and when they reach the shell gland (uterus) they will both be encased in a single shell.

So sometimes there can be a hiccup and two yolks are released at the same time – this causes a double yolk egg.

You can read How Do Chickens Make Eggs for more information.

However it is not just young hens that can lay double eggs. Occasionally these eggs can be the result of a hormonal imbalance which can happen in older hens or hens that have reproductive tumors.

How Rare Is A Double Yolk Egg?

The chances of your backyard chicken laying one is around 1 in 1000.

So if you have a flock of 12 backyard hens you should expect around 2 double yolk eggs per year!

The odds will increase as your chickens get older.

They are so rare because they are caused by a reproductive hiccup. While the hen’s reproductive system is gearing up for a lifetime of laying eggs there are bound to be a few missteps along the way. The phenomenon should be relatively short lived and this is what makes it rare. There are very few hens that continue to lay the occasional double yolk through their laying cycle.

How To Tell If An Egg Has A Double Yolk? 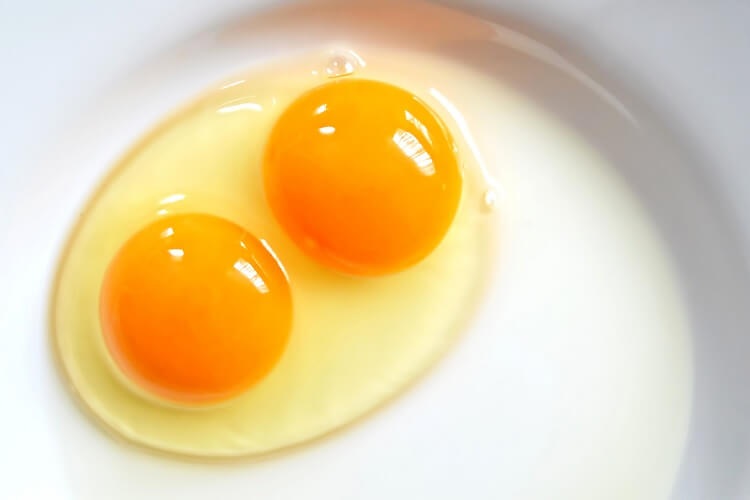 The first clue that an egg could have two yolks is that it will be much larger than the other eggs and will also be heavier.

Most medium to large standard eggs will weigh between 1.7–2.1oz (48-59gm) each. If your egg weighs more than that, a double yolk is a possibility.

You can also candle your egg.

It should show two separate yolks within the shell.

Always bear in mind that two yolk eggs are an anomaly usually reserved for new pullets or older hens reaching the end of their egg cycle. So if you have the above clues and a hen that fits the narrative, you may find yourself with a double yolk egg!

The following video shows you how to judge whether or not an egg has two yolks.

The albumin may contain slightly less of its nutritional value, but you will have twice the protein from two yolks.

Some people actually pay more money for these eggs, so if you get one by accident consider yourself fortunate!

The nutritional value of a double yolk egg is just about the same as a jumbo egg, but you might not want to use them in baking since it could throw off the recipe because of the two yolks. 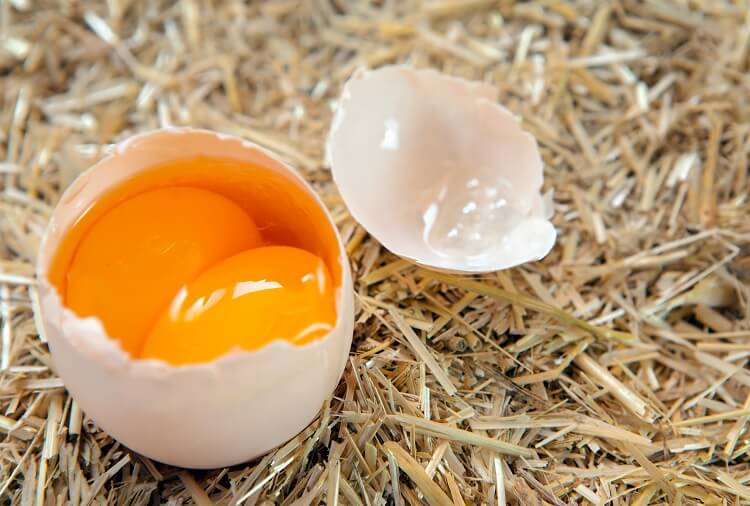 You can find old wives’ tale about almost everything and double yolk eggs are no exception!

In Wiccan lore they are thought to bring good fortune or luck.

Whereas in Romany folklore if someone in the family is pregnant when a double yolk egg is found, then it is said she will have twins. It stands to reason that these eggs (being a symbol of fertility) will bring news of a birth.

In Norse mythology a double yolk is thought to predict death.

Finally, in the spiritual community it is thought to be an indicator that you are about to meet your twin flame or soul companion.

So there you have: birth, death or good fortune, take your pick!

Will a hen lay a double yolk every time?

It is very unlikely that she will lay a double yolked egg each time she lays.

Normally this will happen once in a blue moon.

They are usually a fairly short-lived occurrence. Once the pullet’s reproductive system settles down, she will start laying single yolk eggs.

Can I make my chicken lay double yolk eggs?

The short answer is no.

If it was possible then the egg industry would already be doing it.

Chickens have been genetically altered through breeding programs to increase normal egg production, but double yolks are not a norm, they are unusual and no-one can predict which hen may lay these eggs.

Can I hatch a double yolk egg?

The chances of hatching a double yolk are very slim – usually only the strongest chick will survive.

As we know the space inside an egg is limited and a chick grows to fill the available space precisely, so two chicks occupying the same space would be small and probably weak.

What usually happens is that the stronger of the two prevails and the second, weakest chick dies. This can cause hatching problems for the strong chick since it may not be able to maneuver into the hatching position.

However, there have been very rare instances of both chicks surviving the hatch.

The heavier laying breeds (such as Orpingtons and Rhode Island Reds) are more likely to produce double yolks when they first start laying. Your pullets are fine and they will settle down eventually.

My older hen has started laying double yolks, is she sick?

When a hen’s reproductive life cycle is coming to an end you can expect some irregularities. One of this irregularities can be laying double yolk eggs.

If she has any distress or other symptoms she should be checked out by a vet though.

While double yolk eggs are unusual, it is not necessarily an indication that there is something wrong with your hen.

In fact in India these eggs are highly sought after and certain types of chickens are kept to specifically lay double yolkers.

If you have several younger hens and they are good laying breeds then the chances of getting a double yolker are good for the first few months.

After that her reproductive system should be in fine working order and have all of the wrinkles ironed out.

The reproductive system of the hen is really a miracle of nature and resilience.

In the past hens did not lay anywhere as near as many eggs as they do now. Mankind has increased the output of the hen dramatically and the wonder lies in the fact that the hen has taken it in her stride and produces a lot of eggs for us. The fact that the system can continue to produce eggs with only the occasional oops is a testament to the design and robustness of the hen.

Do you have any stories about double yolk eggs? Let us know in the comments section below…

Welsummers are slowly becoming popular here in the US. They are earning a reputation for being a friendly, delightful and self-sufficient. She also lays a deep red terracotta colored egg with speckles. The egg is almost as pretty as the hen herself! Keep reading to Read More →

Roosters Crowing: Why, How Loud, When and More…

Roosters can crow for all kinds of reasons. The most common reason is the wake up crow. This is simply their way of saying good morning and leading the flocks out to forage. However roosters can also crow to warn their flock or to announce Read More →

The Silkie chicken is loved by many for their unusual appearance and furry feathers. They stand alone in the chicken world as being the only breed to have this furry appearance. She has a long history that runs all the way from the ancient Chinese Read More →