The Wyandotte is one of America’s most iconic breeds.

This chicken has graced thousands of small farms across the US and has not lost her shine over the years.

She is a hardy, no nonsense breed that is very self sufficient.

The Wyandotte family has many varieties but one of the most beautiful is the Golden Laced Wyandotte.

They are quite independent and make a valuable addition to any backyard. 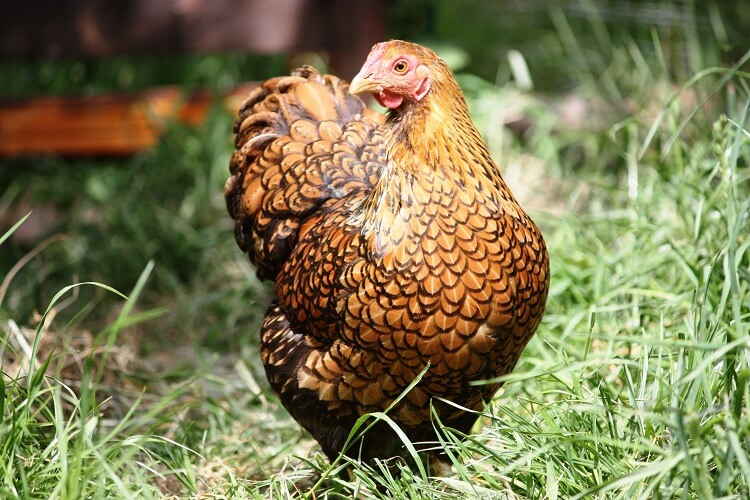 The Golden Laced Wyandotte is a dual purpose heritage chicken.

They are one of the first American breeds to come onto the chicken scene and have a simple yet stunning plumage.

This is certainly an eye-catching chicken and many folks buy them for looks alone.

They were first bred in the late 1880s and with a little refinement here and there have remained fairly unchanged since then.

The Wyandotte is known for being fairly self-sufficient. Providing they are given the three basics (food, water and shelter) they can manage well by themselves.

She is a respectable layer of large light brown eggs and because of their size make an equally respectable table bird. Whilst they are a bit slower to mature than their hybrid counterparts, they will lay eggs much longer than them.

They are an even tempered and docile breed that are not going to cause problems.

Their easy going and tolerant nature makes them ideal show birds and they are very widely exhibited in the Midwest.

They are a good breed for beginners as they are so calm. However small children should be watched carefully as the Wyandotte does not enjoy being picked up, held or cuddled. 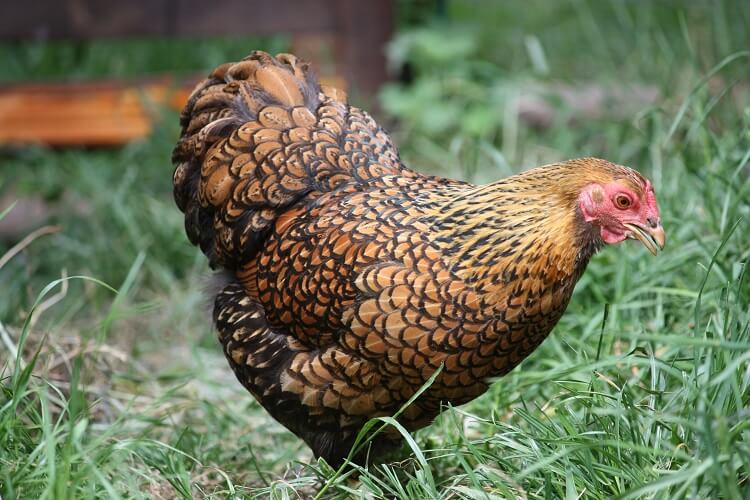 The appearance described here refers to the Gold Laced Wyandotte only.

Wyandottes have a small head that is crested by a rose comb. Occasionally a bird with a single comb is found however this is not a pure breed.

Comb, wattles and ear lobes are all red and their beak is stout and dark yellow or horn color. Their skin is also yellow. Their body is large and wide with good depth. The broad back should form a U shape rising up to a perky tail. Their legs are well spaced, short and sturdy.

Her plumage should be loose and fluffy but not give the appearance of a Cochin.

Their feathers should be held against the body. The Gold laced is a large chicken and looks even larger because of all of her fluff.

Whilst the Wyandotte breed family has many color varieties, the gold laced is strictly gold laced with no variations.

The overall background color is a dark brown or black. Their head and neck appear more golden than black. The breast, wings and saddle areas have gold feathers edged in black. The gold lacing shows very well on the hens but the rooster looks much different.

A Rooster’s head and neck will be a gold or chestnut color. The lacing is confined to the breast and wings but is not as clearly defined as the hens.

He also has a gold triangular wing patch.

The hackles and saddle feathers are a gold come chestnut color and the sickles are black.

What Is It Like To Own Golden Laced Wyandottes? 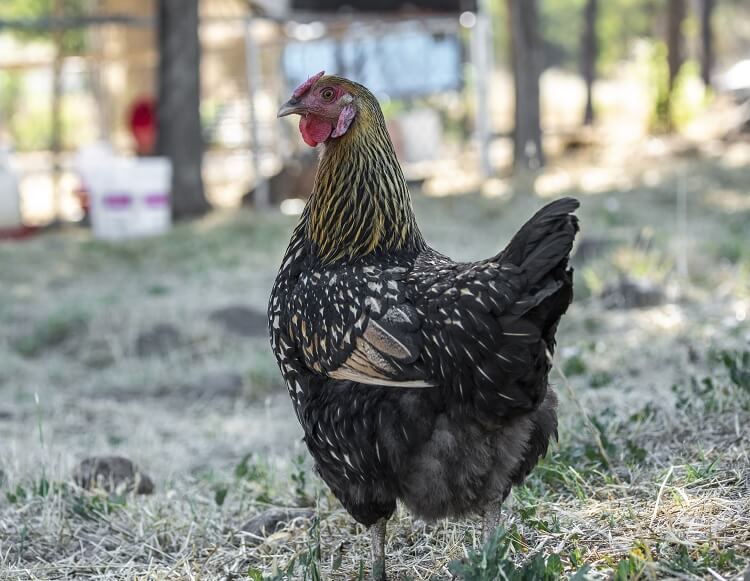 Golden Lace Wyandotte are a quiet and reserved breed.

They really do not interact much with other breeds and seem to ignore others and stick together as a group.

However if any bird starts picking at them the aggressor will be firmly put in their place – they do not tolerate any nonsense.

She is active and likes nothing better than foraging in the yard and garden looking for tasty little treats such as caterpillars and other bugs.

As she is a large chicken, exercise and foraging helps them to keep busy and active both physically and mentally.

The Golden Wyandotte is best described as a loner.

They prefer the company of their own kind and rarely mix with other breeds which can give the appearance of aloofness.

She is not a chicken that enjoys lap time or cuddles.

They are content to be your friend and hang around for treats and the occasional pet, but they do not want to be held too much.

Overall this is a quiet bird that is not known for being aggressive.

However they do not tolerate being bullied. If another chicken starts picking at them they will firmly make their superiority known and that will be the end of it. This breed can tolerate a wide variety of climates which makes them an ideal breed for beginners and 4H members alike.

They are suitable as a family bird although small children should be watched carefully as they will not tolerate being fussed with. 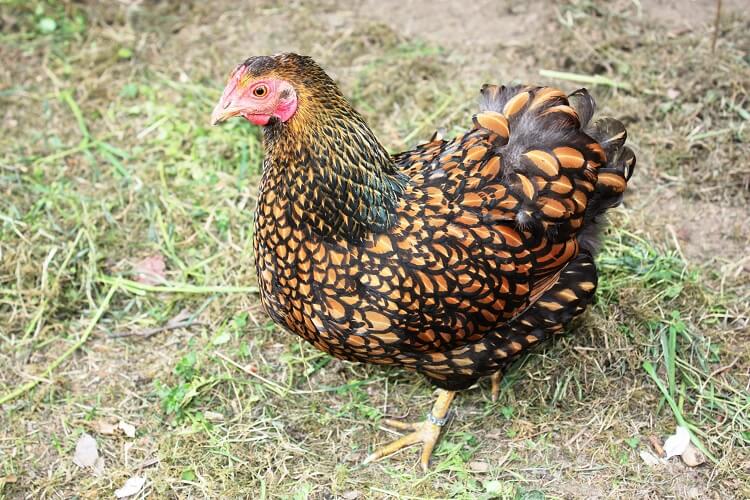 This hen is a very respectable egg layer.

Expect four eggs each week which works out to a little over 200 eggs each year – certainly a good number.

The eggs are a cream to light brown color and large in size.

You can expect them to reach point of lay around the 18-20 week mark.

Although they do make good mothers, Wyandottes are not renowned for being broody so if you want to have some chicks from them be prepared to fire up your incubator.

As mentioned earlier this is a calm and quiet chicken.

This makes them perfect for an urban setting.

They do make noise in the form of the egg song and predator warnings, but generally the hens are pretty quiet. 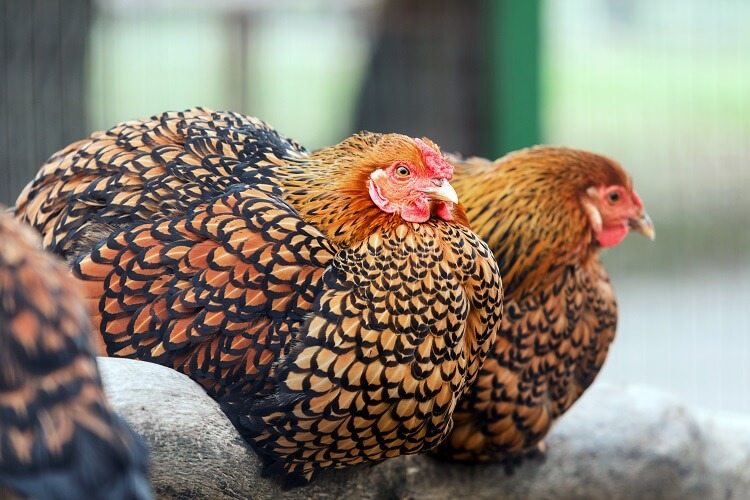 Wyandottes are healthy and robust chickens.

That being said you still need to watch out for common diseases.

All chickens are susceptible to lice, mites and worms, so you need to monitor your chickens health for any signs of trouble.

Treat parasites as you find them or use a schedule for regular treatment.

Diseases like Marek’s are unpredictable so you should get your birds vaccinated if possible against some of the more common chicken diseases.

But overall this is a robust breed that should be very healthy.

All chicks need to be fed a minimum of 20% protein feed – they grow very fast and need the protein to grow!

Once they reach 16 weeks old you can start to transition them over to 16% layer feed. This feed is for laying hens and contains all they will need to start the laying cycle in a few short weeks.

You should also provide your flock with a separate container of oyster shell for those birds that need it. Do not mix oyster shell in with their feed as not all hens will need it and too much calcium can cause problems.

Insoluble grit should also be given in a separate container.

Lastly there should always be clean fresh water available to your flock. Water gets overlooked sometimes but it is crucial for a strong functioning chicken. 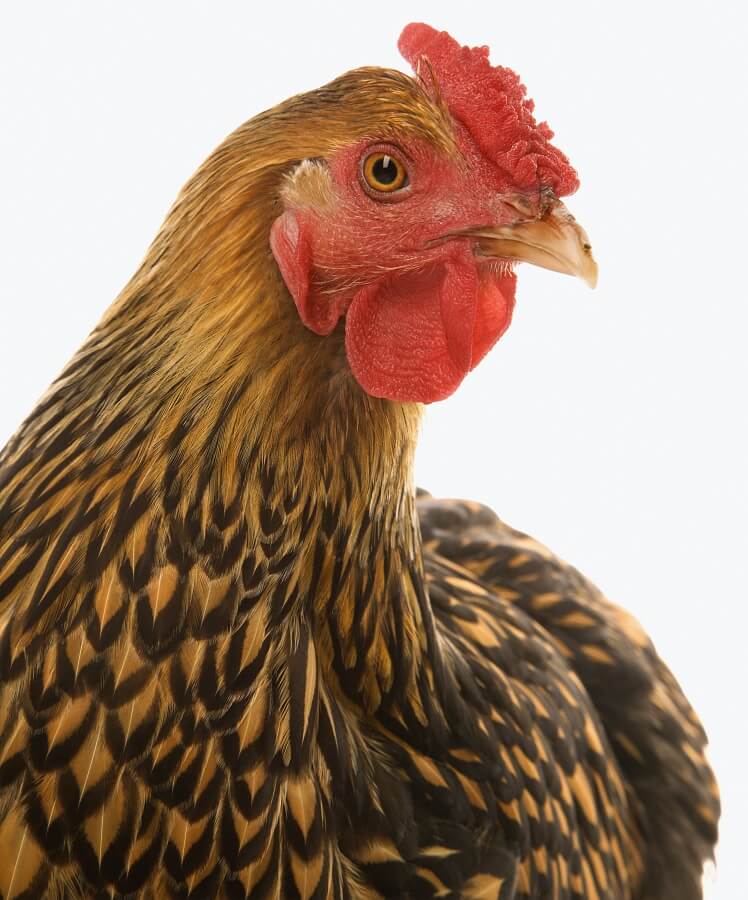 Space is important for these girls as they are fluffy and large.

The standard 4 square feet of coop space per hen could be considered a bit tight for them. If you can afford to give them more room they certainly will appreciate it.

As for perches they should be strong enough to hold these large ladies. Each hen will need at least 8-10 inches of perching space. Make sure the perches are spread out and placed lower to the ground.

As Wyandottes are large birds they could easily injure a leg when jumping down from a high roost.

The standard 12×12 nesting box will fit them perfectly with little room to spare. This will prevent two chickens from sharing the nest which can lead to dirty or broken eggs.

Wyandottes tolerate confinement very well as long as they have a big enough pen.

With a larger bird like this they need around 10 square feet of pen space per chicken. If you are keeping them in a pen make sure they have things to keep them occupied – this will prevent habits such as pecking from developing.

However if you can let them free range we would recommend this.

They are good foragers and enjoy being allowed to roam.

The exercise is good for them and keeps them busy. 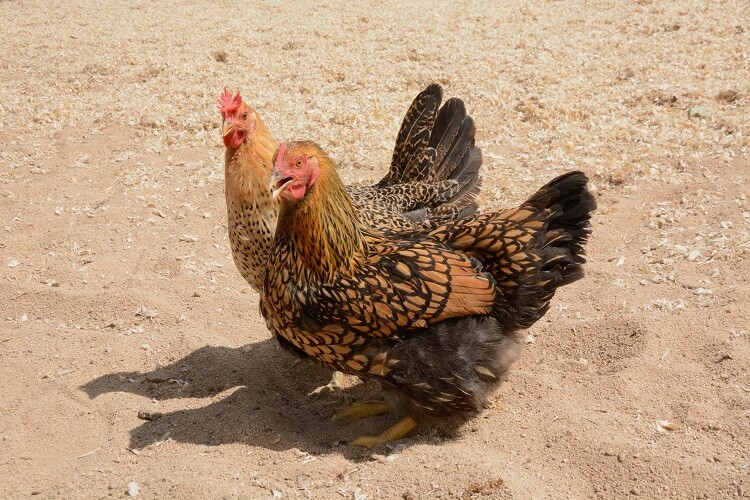 The history of the Wyandotte breed dates back to the 1880s.

Back then the average chicken was usually a scrawny affair that laid few eggs. They were kept for those eggs and as stewing birds but really were not seen as a farmyard animal like a cow or sheep.

There was a need for a dual purpose chicken that laid a good amount of eggs and was big enough to feed a family as table fare.

The exact genetic input of the original Wyandotte will likely never be known, but we do know that Brahmas and Hamburgs were used.

However we do know the genetics of the Golden Laced Wyandotte. They were created in Wisconsin by mixing Silver Laced Wyandottes with a Partridge, Brown Leghorn and Cochin.

Originally Wyandottes had both single and rose combs, but when the breed standard was set in 1883 the rose comb won out. They were a firm favorite in the colder northern states of the US since they tolerated the cold weather very well.

As factory farming thrived many good old fashioned breeds (such as the Wyandotte) declined in popularity.

The slow decline of popularity continued and at one time the Wyandotte was considered an endangered breed.

However the recent wave of interest in raising your own chickens helped the Wyandotte tremendously. The breed was rediscovered and has enjoyed steady success since. It was removed from the endangered list in 2016.

The Golden Laced Wyandotte could make a wonderful addition to your flock.

Their temperament is docile and calm which is a blessing to any flock.

This is not a noisy bird so if you have close neighbors they should not be a problem – urban living is a possibility for them.

If you let them free range they can remove bugs and other creepy crawlies from your yard.

Because of all these things this breed is rightfully very popular. Do you keep a Golden Laced Wyandotte in your flock? Let us know in the comments section below…

The Black Australorp is a hard working chicken. She is one of the best egg layers around and can lay more than 5 eggs every week. Their egg laying ability and impeccable manners help to make them a wonderful chicken that is well suited to Read More →

Welsummers are slowly becoming popular here in the US. They are earning a reputation for being a friendly, delightful and self-sufficient. She also lays a deep red terracotta colored egg with speckles. The egg is almost as pretty as the hen herself! Keep reading to Read More →

Different types of chicken bedding have different uses in the coop. Using sand in the coop is something you either love or hate. Why opinions are so strong we are not sure but there is not much middle ground on this subject. Those who praise Read More →