Not many chicken keepers know about the extensive history of chickens.

It may be surprising but your cute backyard chickens were once wild birds that roamed the jungles of Southeast Asia. They foraged on whatever they could find in the dirt which is very different to today’s grain-fed chickens.

Chickens were very important to the development of early civilizations and there are so many important milestones in the history of chickens to learn about.

In this article we will explain the origins of the chicken, human’s first interactions with them, hen fever, the industrialization of chickens and much more. 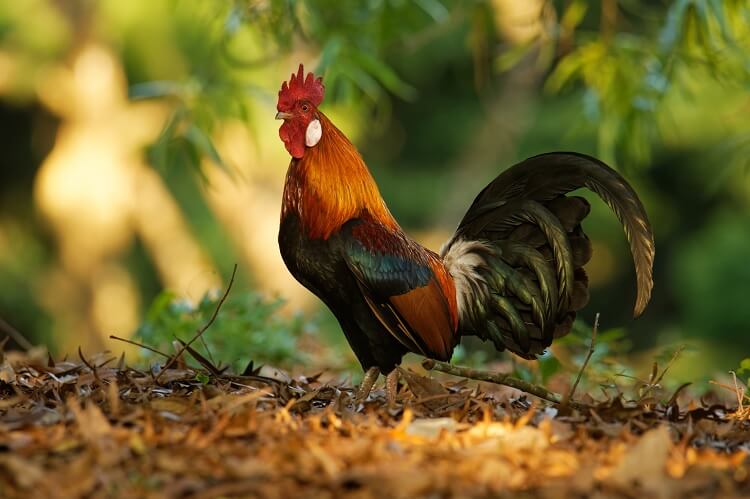 The origins of the modern-day chicken are rather mysterious.

Whilst they can be traced back to several ancestors and regions, it is generally agreed upon that most chickens are descendants of the red jungle fowl (Gallus gallus) from Southeast Asia.

It is also believed that the gray jungle fowl (Gallus sonneratii) was another ancestor, as several modern-day chicken breeds have similar traits to them (such as yellow skin).

The red jungle fowl was incredibly skittish and nothing like the backyard chicken breeds of today. They spent most of their time hiding in trees and would eat insects and any seeds that they could find.

They would even snack on the occasional lizard and baby snake as well.

Interestingly they could also fly much better than today’s chickens. 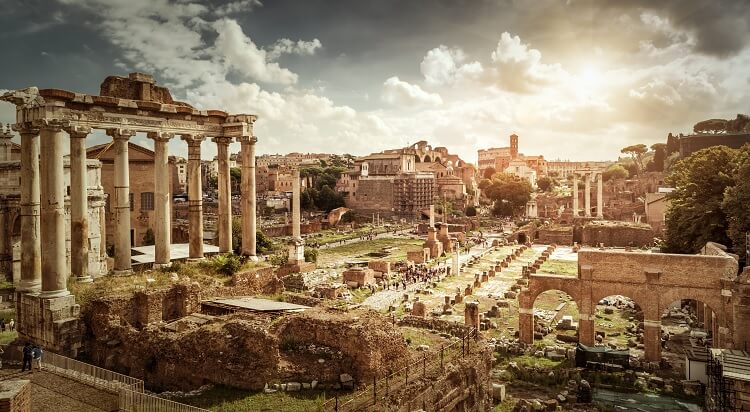 The red jungle fowl were first domesticated by humans in the Indus valley around 2000 BC.

At this time natives originally used chickens for cockfighting which was a popular form of entertainment where chickens were provoked to fight each other.

Sadly these matches often resulted in the death of one or both chickens.

Chickens that were aggressive and possessed high stamina and strength were prized.

This lasted for around 500 years until the Indus valley was invaded by Aryans in 1500 BC.

The Aryans discovered these chickens and decided to use these birds in their ceremonial rituals and culture – they were often used as sacrifices to their deities.

Whilst chickens were still not technically used as a food source, it should be noted that they were often eaten as part of the ceremonial rituals.

Chickens were then transported to other regions such as Persia and Mesopotamia. Eventually they reached Greece, North Africa and the Romans in southern Italy.

This interested them because it would provide a portable source of meat for their military. They successfully bred and developed two types of chickens:

Chickens designed for meat consumption were larger for their meat while the chickens meant for egg laying were generally lighter.

From here chickens continued to travel and spread across the world and in 55BC reached Britain. Interestingly at this time the consumption of chicken meat was banned in Britain under Druidism (an old Celtic religion).

So again chickens were only kept in Britain at that point for the purpose of cockfighting.

Not long after this time the fall of the Roman Empire began.

As the Romans were one of the biggest advocates for chicken ownership, the popularity of chicken keeping also rapidly declined.

However this would not be the end for the rich history and development of the chicken that we know today. 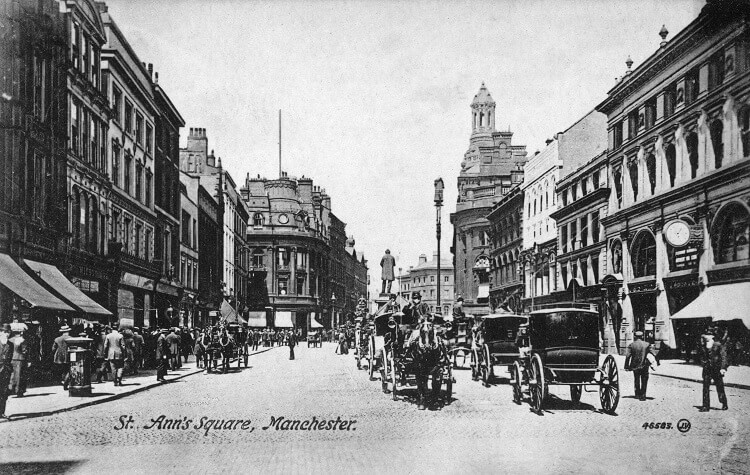 From the fall of the Roman Empire in 476AD until the 1700s chickens survived in relative obscurity.

However fait would prove fortuitous for chickens.

This was in no short part due to Queen Victoria of England.

In the late 1800s Queen Victoria acquired Cochin chickens from China and they were an excellent addition to her menagerie (collection of strange and exotic animals) for two reasons. Firstly, these chickens were not picky about what food they ate and they were easy to keep. Secondly, their appearance was completely unique and unlike any bird they had seen before.

Queen Victoria adored them and often sent the eggs of these exotic chickens to other royalty making them immensely popular across England. 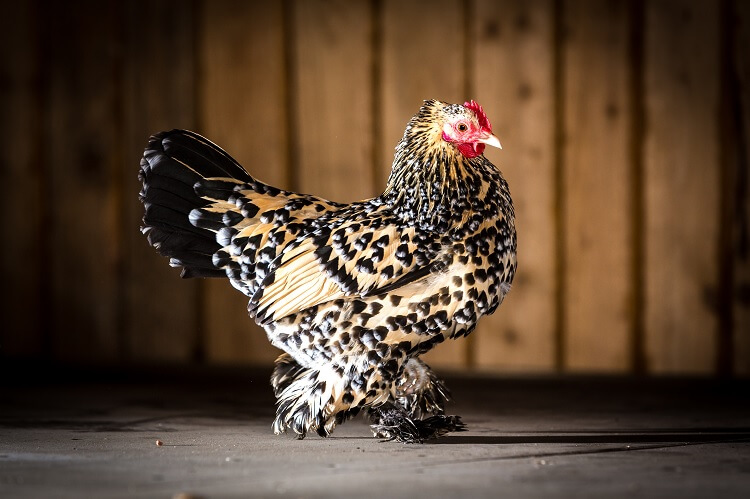 However it was not just the Cochin that was the star of Hen Fever.

Brahma chickens were also an extremely popular breed. These are extremely large chickens and in fact they are so large they are often called the King of Chickens.

George Burnham (a well known author at the time) had gifted Queen Victoria some of his own Brahma chickens. Queen Victoria adored these Brahmas so they too also joined the spotlight alongside Cochins.

Arrival To The United States

Eventually the craze arrived in the United States – everything poultry related became a hot topic and prompted the term Hen Fever!

In 1849 the first poultry show (Boston Poultry Show) in the United States was held. This only added fuel to the raging fire of chicken interest.

Because of this heightened interest farmers began treating and breeding chickens with more care as valuable and profitable livestock.

Once the bottom feeders of the livestock chain, chickens began seeing more and more attention. It was during this time that specialized feeds and diets were developed – this very much helped improve the health and egg production of chickens.

New breeds were also being rapidly developed as people bred them to produce new novel results.

Even though during the 1850s Hen Fever died down, it left a lasting impression and chickens were no longer in obscurity. 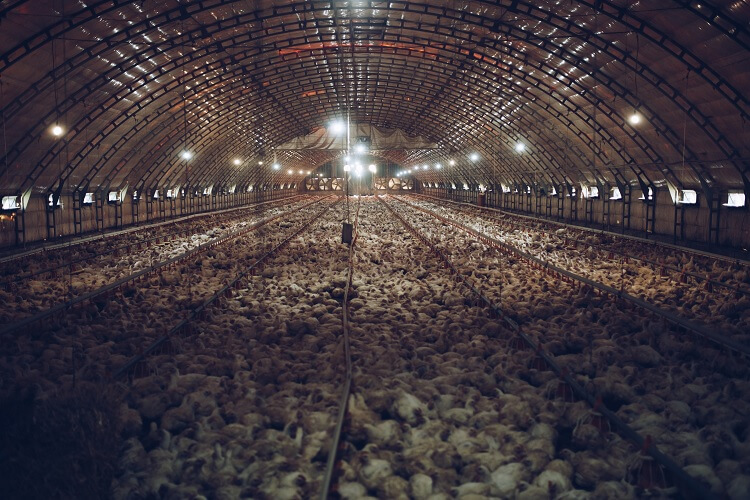 Before their industrialization, little thought was given to the care of chickens.

Raising chickens was considered a woman’s responsibility and was therefore less important than the traditional more significant sources of income such as coal, crops and lumber.

Chickens were minimally fed with corn and were left to forage in the fields. They did not have coops and instead they took shelter with other animals on the farm or in trees and brushes.

Their meat was rarely eaten and reserved for special events and holidays.

Eggs were a delicacy.

Chickens and their eggs were only sold when there was excess and not for profit.

Generally chickens were eaten by the family that raised them and not by customers who purchased them.

In the early 1900s the industrialization of chickens began with Mrs. Wilmer Steele.

She is widely considered the pioneer of the commercial broiler industry. She raised 500 broiler chickens and made so much money she built a chicken house big enough for 10,000 chickens.

Yet again the general interest in chickens piqued.

As many others followed in her footsteps several observations were being made about chickens.

One of the most significant observations was that some chickens were better for meat than laying eggs and vice versa. This led to the development of single purpose chicken breeds – chickens that were either raised for either meat or egg production.

This was much more efficient than dual purpose chickens and led to the increased genetic efficiency of the egg laying breeds. These egg laying chickens could now lay more eggs and even lay throughout the winter.

As broiler chickens became more popular chickens were beginning to be sold in various styles of production. One of the most popular styles was called New York Dressed. A New York Dressed was a chicken carcass that was plucked with the feet and head still attached.

While the industrialization of chickens continued, so did the complexity of the breeds.

More and more chicken owners were creating chickens that were specialized for either egg laying, broiler chickens, or even for exotic bird collecting.

It was during this time (1873) that the American Poultry Association was established. From then on the organization was in charge of establishing standards for chicken breeds across North America.

The broiler chicken industry continued to boom at the turn of the 20th century and chickens helped to establish other businesses and jobs in the industry such as hatcheries and feed mills.

This includes hatcheries which were developed to incubate and hatch eggs. Equipment and machines designed to help with this process, such as incubators and heat lamps, were absolutely needed to use in place of a broody hen.

Also grow out farms were developed.

These are specialized buildings that chicks were placed in to develop. Farmers used grow out farms to control feeding and water in addition to many environmental factors such as temperature and humidity.

Most notably the industry around chickens grew and started to evolve into the billion dollar industry that it is today. 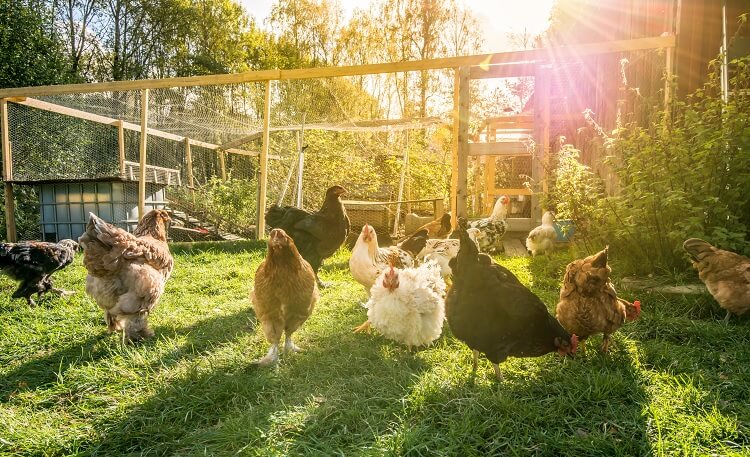 They are an important part of culture all around the world.

If you have been a reader of Chickens And More you know too that millions of people around the world now raise chickens in their backyards as productive pets.

Although the main function of keeping chickens for those in the suburban areas could be for their egg production, the care and emotional attachment experienced with these birds leads them to fall into the pet status.

Some breeds have been specially bred for their friendliness and make the perfect pet for those who prefer birds over the traditional cats and dogs.

Due to the interest in the topic research has greatly improved the health and lives of chickens.

With new and improved feeds, more knowledge about their diets and behaviors, and more general information about chicken breeds, backyard chicken keepers are now more educated and knowledgeable than even before.

This means they are able to provide so much more for the chickens and give them the best life possible.

Who knows that their fate will be in the future?

Chickens have come a long way from being wild foragers to backyard pets.

Regardless of their role it is clear that they have changed a significant amount throughout their long history, both genetically and culturally.

The next time you see your chicken in the backyard take a moment to remember their historic journey from the early civilizations to the modern day chicken.

Their journey is far from its end and only time will tell what will become of them.

Let us know your thoughts in the comments section below…

How Do Chickens Mate: The Complete Guide

When the days get longer and brighter and the temperatures start to rise, the flock will start to feel the pull of the mating season. But how do chickens mate? Most of us do not think about how chickens mate, why would you? But if Read More →

How do you get the most eggs from your backyard chickens? It may sound like a difficult question but if you have kept chickens before you already know the answer – you treat her like a queen! To get your chickens to lay lots of Read More →