Most of us do not really think much about the humble egg.

It is just another nutritious grocery store item that we either purchase from the store, or collect from our lovely backyard hens.

Unfortunately though, not much thought goes into what happens inside a hen’s body when she is laying an egg.

There are more steps than you think!

The egg travels a surprisingly long way through the hen’s body before ending up in the nesting box.

If you are interested in educating yourself and learning about how a hen creates an egg, from the humble egg yolk to the iconic chicken egg in a nesting box, then you have come to the right place.

Keep reading to learn about the fascinating journey of egg laying in hens. 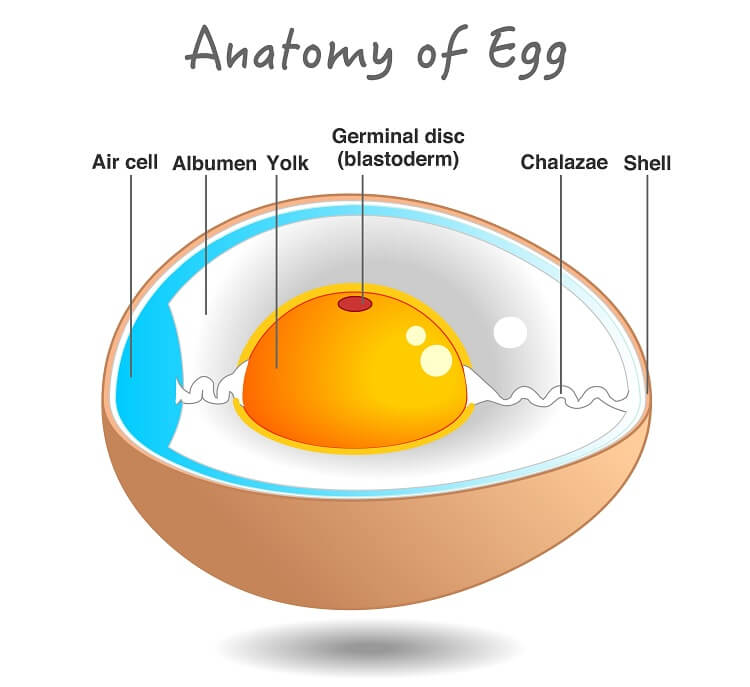 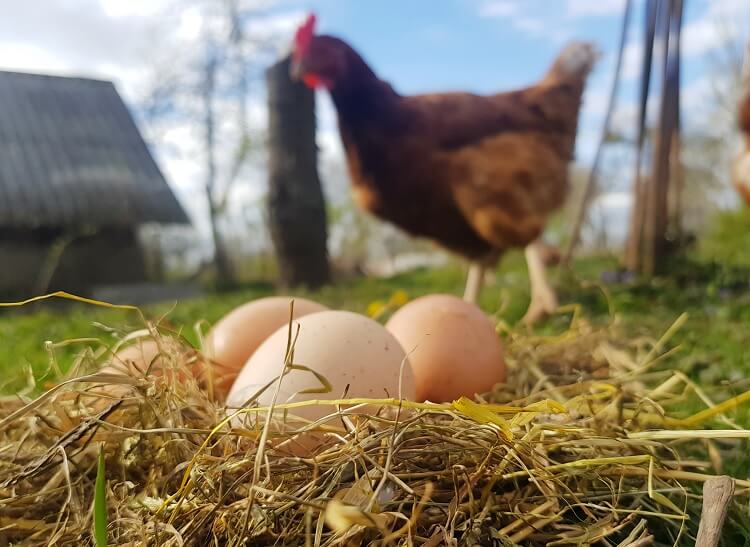 Surprisingly the egg making process starts long before the egg is actually made.

It actually begins with the birth of the hen.

Like many other females species, hens carry a finite amount of eggs in their bodies from the moment they are born. This means that they carry all the eggs in their body at birth. After birth no new eggs are produced. Once the eggs in a hen’s body are used up, she will not able to lay any more eggs.

It will take about four months until a matured chicken starts to lay eggs.

The first eggs that a chicken lays will be very small and they will gradually increase in size as they get older.

Now back to how do chickens make eggs.

Before eggs develop they are known as ova (plural) or ovum (singular). These future eggs are stored inside follicles, which are almost like little sacs that hold the eggs.

The follicles and eggs are held inside a reproductive organ called the ovary.

Although hens have two ovaries (a left and right ovary) only the left ovary is functional and releases eggs. This is unusual as many other animals that have ovaries produce eggs and use both sides. However with hens, the right ovary shrinks once the chick is born. Therefore only the left is involved in the egg making process.

It is though that this process happens to make the hen’s body more aerodynamics to help them fly.

Once the ova has developed enough into an egg yolk it is released by the ovary into the next phase of egg development. This process of the ovary releasing the egg yolk is called ovulation.

During ovulation the ovary releases the egg yolk into a reproductive organ called the oviduct.

The oviduct is shaped like a winding tube and has different parts where different stages of the egg development occurs.

It is best thought of as a subway that transports the egg throughout multiple different stages. 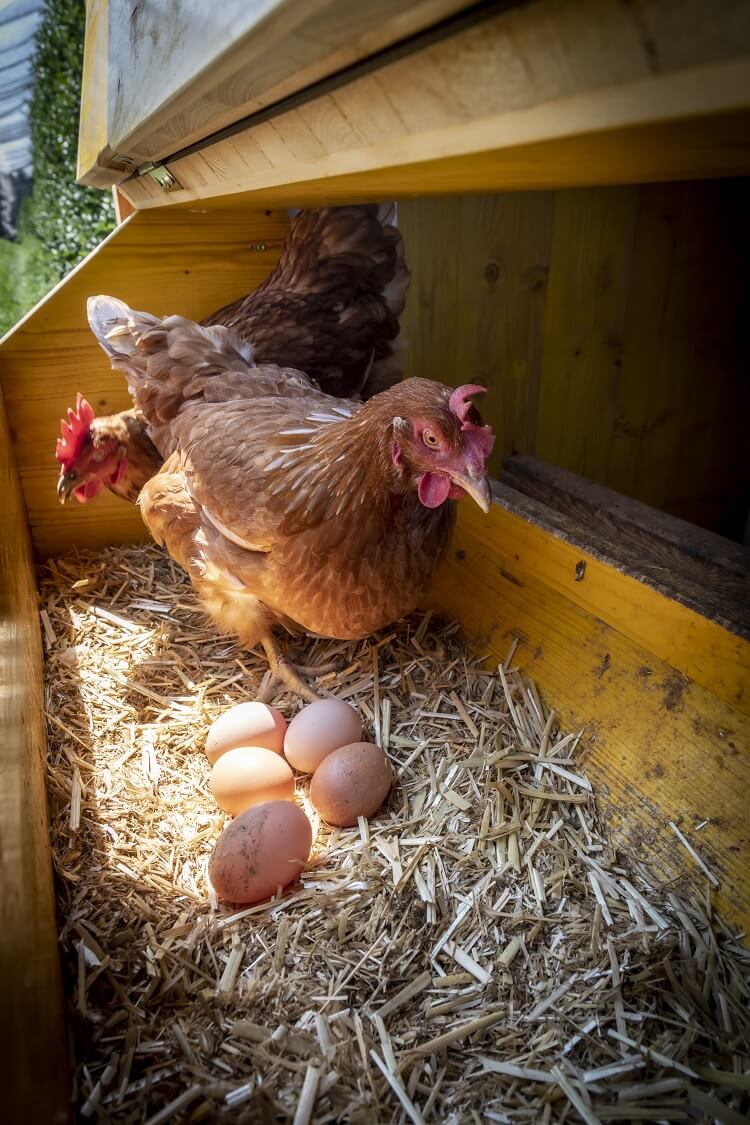 The second section of the oviduct and the second stage of making the egg is inside a region called the Magnum. Here the proteins that make up the egg white are added to the yolk – it can take about three hours. The egg white is also called the albumen.

At this point the egg looks just like an egg except without a shell.

Finally the egg reaches the uterus (the uterus is also known as the shell gland because of its function).

From here the egg will take about 24 hours to develop the egg shell – it is the longest step of the egg development process. During this process calcium is collected from the hen’s body and from her diet to supply the calcium carbonate needed for the egg shell.

Any coloration to the egg is also added here – read what color eggs can chickens lay for more detail.

After the color is added the final layer is added.

This is called the bloom.

It is a protective layer around the egg that stops small microbes from entering the egg.

Finally the fully developed egg is rotated and positioned large side outwards in the vagina. This process is called oviposition. Once the hen is comfortable and ready to lay, the egg will be pushed out of the vagina. This is called the cloaca or vent. The hormone arginine vasotocin creates strong bodily contractions and helps to push the egg out of the hen’s body.

The egg then leaves the hen’s body and ends up safely in the nesting box. The entire process of egg laying takes about 24 to 26 hours to complete. Once the cycle is completed and the egg is safely laid the system is given about 30 minutes of rest time before restarting again!

More About Chickens And Eggs 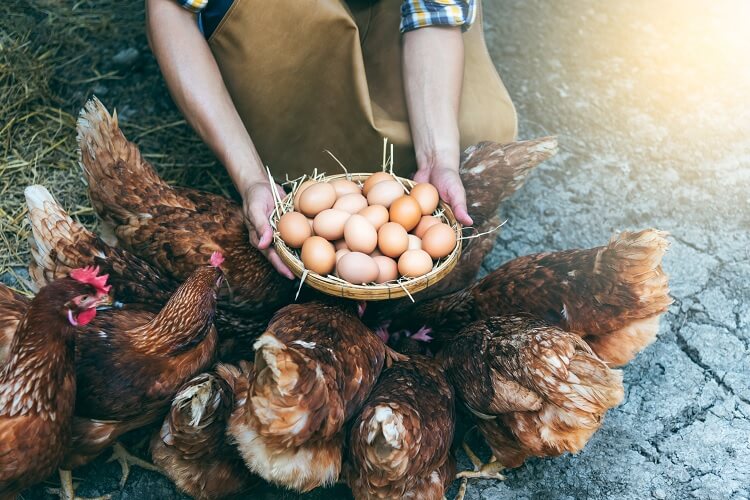 Like many life processes, egg laying is not without complications.

During the oviposition process (where the egg is rotated large side outwards) it is possible for the egg to get stuck. It can even get stuck somewhere in the body earlier in the egg making process. This complication is called egg binding or a bound egg.

You can read more about it here – complete guide to egg bound chickens.

If this happens to your hen she will need help, so make sure you know the symptoms.

It is also important to make sure your chickens are getting a nutritious diet.

For a chicken to lay an egg it takes a huge amount of calcium.

If there is not enough calcium in the hen’s diet, the hen will start to use calcium from her own body – this is not healthy. If you notice their egg shells are getting thinner then you will need to add some calcium rich foods or calcium supplements into their diet.

Did you know that daylight has a big impact on how often chicken lays eggs?

Your chickens will lay the most eggs during the summer and spring months when there it is generally sunnier and brighter outside.

The days are also longer.

During the winter they tend to slow down their egg laying due to the shorter days and less light. Sometimes they even stop laying altogether. Do not worry, this is only temporary.

If you still want your hens to continue laying eggs throughout the winter, you can trick them by adding a light to their coop. They will see that there is more light and continue their normal laying pattern.

However hens naturally stop laying eggs during the winter to give their body a rest, so think carefully before you add a light to the coop. 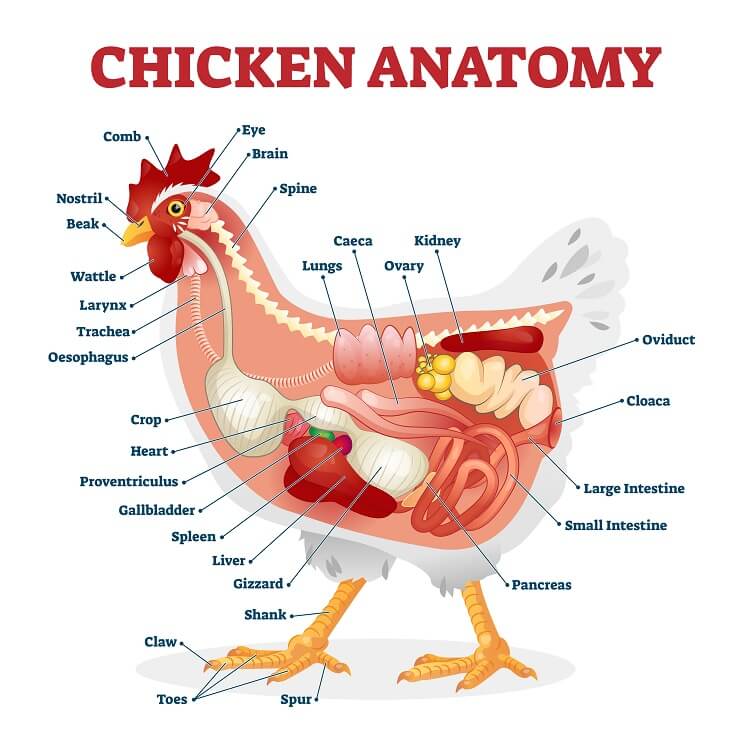 Can Chickens Lay Eggs Without A Rooster?

One common misconception is that chickens cannot lay eggs without a rooster. This is false.

If your egg were to become fertilized it would happen in the Infundibulum. There will be a white speck on the egg yolk (known as a blastodisc) and this is a good indicator that the fertilization process has begun. If your egg has been fertilized, cells begin forming and will turn the blastodisc into a blastoderm. Pretty soon you will end up with the beginnings of a small chicken embryo.

It is important to know that there are health risks associated with eating raw or undercooked eggs.

One of the most well-known is bacteria called Salmonella – this can make you severely sick. It is possible that the inside of the egg could be contaminated with the bacteria if the hen is carrying Salmonella.

This is why it is important to clean your eggs just before eating them or using them.

There are a few ways to prevent Salmonella:

Although it may not seem like it, the production of the egg is a complex process.

Each chicken will need at least 24 hours to prepare and lay an egg.

The next time you are at the supermarket choosing eggs or collecting eggs from the nesting box, try imagining the interesting development of the egg.

It is very eye-opening to picture what happens inside the hen’s body as the egg develops.

Hopefully you will be reminded about the amount of strain and work a hen’s body goes through to develop this delicious delicacy we take for granted.

Which was the most interesting stage of how a chicken makes an egg for you? Let us know in the comments section below…

Chicken Diseases: The Complete List (And How To Treat Them)

Chickens and chicks can suffer from a variety of diseases. The effects of these diseases can range from a temporary upset with no long-term effects, to long term issues with health and egg laying. Because many of these chicken diseases are contagious you should isolate Read More →

What Color Eggs Can Chickens Lay? The Complete Guide

In today’s article we are going to take a look at chicken egg colors. What color eggs can they lay and how did the shell get to be that color? Everyone knows there are three common chicken egg colors (white, brown and blue). However, there Read More →