Have you ever been confused about how roosters fertilize eggs?

Many people think that roosters fertilize the egg after it has been laid.

This is not correct.

Many roosters frequently mate with hens regardless of whether you want to breed them. Some chicken keepers may mistake mating for aggressive behavior if they do not know what to expect. Roosters also exhibit odd behaviors during courtship that could alarm first time keepers. 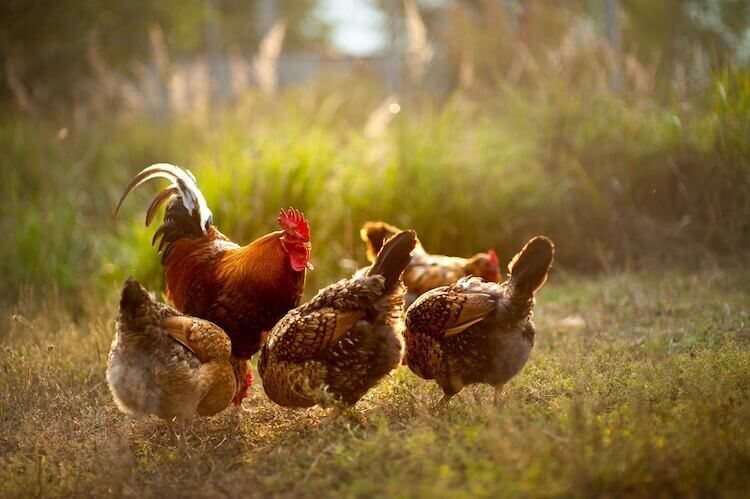 Before you learn how roosters fertilize eggs, you need to understand chicken courtship.

Chicken courtship is a complex series of behaviors between a rooster and hen. Many first time chicken keepers are confused by courtship behavior. It can be difficult to figure out when courtship is happening if you do not know what to look for.

This is especially true when the hen rejects the rooster and no mating occurs. To the untrained eye a rooster’s attempt to court a hen may look like meaningless backyard antics!

However, courtship behavior is far from meaningless. It is a communicative dance between a rooster and a hen. The rooster always takes the first turn. He starts by doing a sideways shuffle towards the hen he is interested in. During this shuffle he approaches the hen from the side.

He will then lower one wing and circle the hen. Depending on the hen’s behavior he may or may not make a full circle around her.

This is an odd sight to see because the rooster spreads one wing out towards the ground. When seeing it for the first time you may think that there is something wrong with his wing. However, there is nothing wrong with him and this is normal chicken behavior.

Once the rooster has performed the wing dance for a hen it is up to the hen to either accept or reject his advances. If she is interested she will communicate to the rooster by crouching down while dipping her head and body towards the ground.

This allows the rooster to easily mount her for mating.

If the hen is not interested in mating then she will reject his advances by walking away and avoiding him. Some roosters may be especially pushy and continue trying to court with the hen until she changes her mind. This is seen most commonly in younger roosters.

Eggs are not fertilized during courtship. That occurs after mating, which is explained in the next section.

How Do Roosters Fertilize Eggs 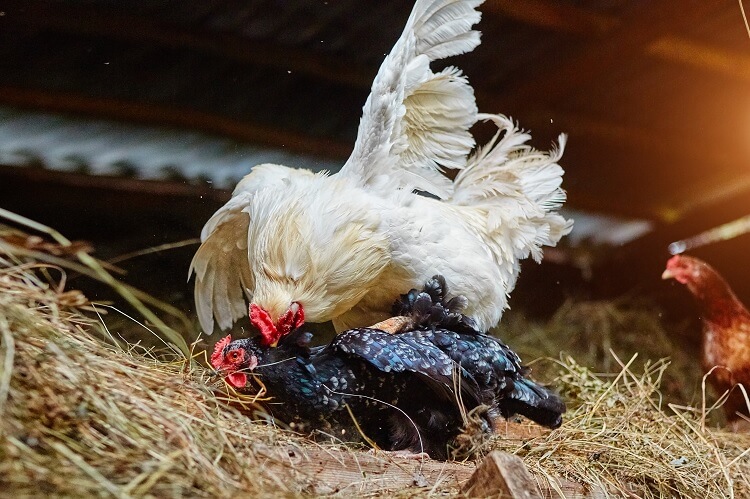 Once the courtship is complete the rooster will mount the hen.

The rooster will grip the back of the hen’s head with his beak. Some roosters may grab the feathers at the back of her neck while others may even grab her comb. Regardless of what he grabs for support, he needs to hold on tight to not fall off.

Once the rooster feels secure on top of the hen, he will tread on her back for a few seconds by scratching at her with his feet.

Sometimes your hen might get injured from too much treading. If you see this happening with one of your hens, then you can use a chicken saddle. This is a piece of thick fabric that is secured to a hen’s back to protect her.

After treading the rooster performs the cloacal kiss.

The rooster must dip his tail down to the side of the hen’s tail and spread his tail feathers. He will then press his cloaca to the hen’s cloaca and release sperm into her. Once this has happened, mating is complete.

Mating is a very quick process that lasts only a few seconds.

At this point you are probably wondering, how is the egg fertilized?

A rooster fertilizes an egg by mating with a hen and placing his sperm into her cloaca.

However, this is the simplified story of fertilization. Once the rooster’s sperm is inside the hen, it goes on quite the adventure before it fertilizes any eggs.

Hens have sperm storage glands inside of their bodies and they can store sperm for somewhere around 2 weeks.

When a chicken is about to lay an egg, the egg will press on the sperm storage glands and release some sperm back into her reproductive tract.

The sperm will not fertilize that particular egg as it is surrounded by an eggshell that prevents fertilization.

Instead, the sperm must travel all the way up to her oviducts. Here, the rooster’s sperm will come into contact with the hen’s next egg. Eggs in the oviduct have just been ovulated and do not yet have a shell that can block the sperm. The sperm will fertilize this egg. 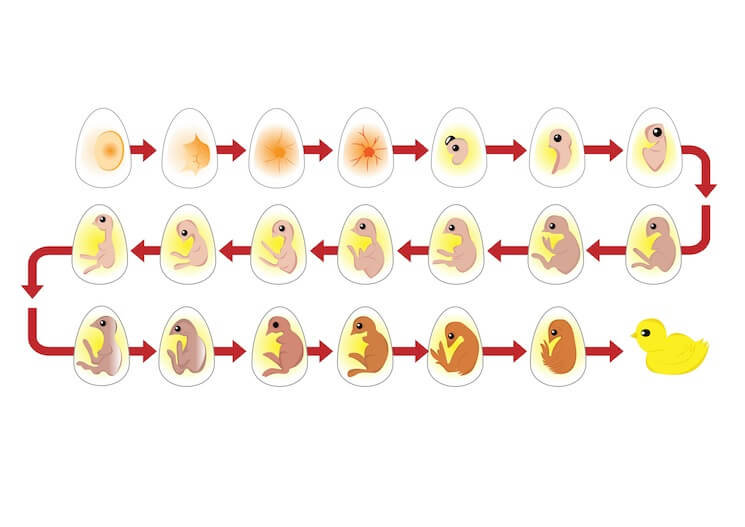 Courtship is when a rooster communicates to a hen that he is interested in her by performing a special dance. If the hen is impressed she will crouch low to the ground and allow the rooster to mount her for mating. Courtship may last a couple of seconds or several minutes depending on the hen.

Mating only lasts a couple of seconds. During mating the rooster mounts the hen and they perform a cloacal kiss where the rooster passes his sperm into the hen’s reproductive tract.

The rooster’s sperm travels a short distance into the hen’s reproductive tract until it reaches the sperm storage glands. Sperm will enter the storage glands and can live in there for between 1 and 4 weeks.

The sperm is released from the storage glands and will travel deeper into the hen’s reproductive tract. Its final destination is the left oviduct. If your hen is a prolific egg layer she might release sperm minutes after mating. However, if she only lays one egg a week it could be a whole week until she releases the sperm.

Once the sperm is in the oviduct, it waits for the next egg to be ovulated. Once the egg is ovulated, the sperm will fertilize it by joining together with the egg.

The egg is fertilized very early on in the laying process. It will take 26 hours for the fertilized egg to fully develop and enter the world as an egg.

Overall, after mating it can take anywhere from 27 hours to 7 days for the first fertilized egg to be laid.

Read How Do Chickens Make Eggs for more. 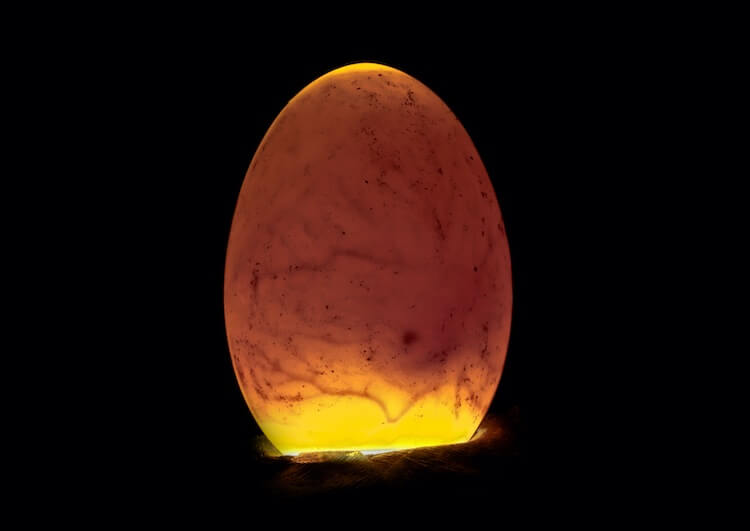 There are two easy ways to tell if an egg is fertilized or unfertilized.

The germinal spot method works great if you are about to eat the egg. However, many people want to know if eggs are fertile because they want to hatch a chick.

You will need to candle these eggs.

Candling allows you to see inside the egg without breaking the shell.

All you need is a flashlight, a dark room, and the egg. Candling should be done after the egg has been incubated for 7-10 days. In the dark room, turn on the flashlight and hold it up to the larger end of the egg.

If the egg looks like it has a dark web inside of it, then your egg is fertilized.

Whereas if you see no dark structures within your egg it means that your egg is not fertilized.

How To Tell Which Rooster Has Fertilized An Egg?

How can you tell?

First, make sure that the egg in question is fertile using the above methods.

If you have only one rooster in your flock, this is easy.

If you have two or more roosters who both mate with the same hen, it is possible that either of them could have been the one to fertilize her eggs. The only way to tell who the father is would be to figure out whose genetics the chick inherited after hatching.

This can be very difficult, especially if the roosters in question are similar.

Do roosters fertilize eggs after they have been laid?

Roosters fertilize eggs about 26 hours before they are laid.

The eggs are actually fertilized inside the hen’s oviduct, before the egg white or egg shell is added to the egg.

Does a rooster fertilize every egg?

If a hen is frequently mating with only one rooster, he will fertilize most of her eggs. However, it is still possible that the occasional non-fertile egg will slip through.

How long does a rooster have to be with a hen before the eggs are fertile?

On average, it takes new roosters 4–7 days to make their way around and mate with most of the hens.

Fertilized eggs can be laid in a minimum of 27 hours after mating if the hen is in the right stage of her egg cycle and lays eggs frequently.

If you are trying to breed your own chickens you can also troubleshoot why breeding is not working.

Is the rooster uninterested and not even courting the hen? Or is the hen rejecting his advances? You can tell if it is a fertility problem if you see the rooster mating with the hen but only candle unfertilized eggs in the following weeks.

Even if you are not breeding, you can now watch the social dynamics between hens and roosters in your flock and know more about what is going on in their lives.

Easter Egger: What To Know About Rainbow Egg Layers

The Easter Egger is a much loved hybrid chicken. They are extremely popular because you are never quite sure what you are going to get in the way of plumage or egg color. As their nickname Rainbow layers suggests they are layers of eggs with Read More →

7 Reasons Why Chickens Lose Feathers And How To Cure It

If you are new to keeping chickens then feather loss can be a frustrating event. You might already be aware of the annual molt but what else causes feather loss in chickens? As it turns out there are a few good reasons for them to Read More →

14 Reasons Why You Should Keep Chickens

Does anyone really need a reason to keep chickens!? Just in case the answer is yes, we have come up with 14 great reasons why you should keep chickens in your backyard. There are many reasons to keep chickens, both practical and personal. This year Read More →