Unfortunately many people cannot keep roosters if they live in zoned areas, so it is important to be able to tell the difference between a hen and a rooster.

Sexing a chick or chicken is fairly easy once you have a little experience.

There are several scientific ways to determine a chickens’ sex and also a few old wives tales too.

However, every now and then a chicken will still fool you! There are the occasional ones that may look like a hen but do not lay.

In this article we will share with you the scientific (and not so scientific) ways in which you can determine the sex of your chicks and chickens.

How Sex A Chicken

Sexing a fully grown chicken is much easier that sexing a chick.

If you take a good look at these two photos side by side you can certainly tell the difference between a rooster and a hen.

The following list gives you the visual differences between a hen and a rooster.

The rooster’s head will usually have a much larger comb and wattles. They should be red, well developed, and held high.

Hens will have much smaller combs that are not as visible. Roosters will also have flowing neck feathers that cascade to the shoulders (these are known as hackle feathers). Hens do not have hackle feathers.

A rooster’s body is held more upright and there are long flowing feathers at the lower back known as saddle feathers.

Hens will have a lower posture and do not have saddle feathers.

You will also notice that the boys are generally larger than the girls. This is most obvious with their legs as roosters have stronger and thicker legs than hens.

Although chickens have quite an extensive vocabulary, crows and cackles are the major vocal differences to note.

If you are struggling to tell a chicken’s sex then listen to them and see if you can hear a crow or cackle.

Watching the behavior of your chickens is a very good way to tell if they are a rooster or a hen.

Roosters are the watchdogs of the chicken world.

They will patrol an area with the flock and are responsible for flock safety. If a rooster puts out the alert all the hens will either freeze where they are or run for cover.

He will find tasty tidbits for the hens and will not eat until they have taken their share. Roosters are also the peacemaker in the flock and will not allow squabbles to get out of hand. There is no doubt who is in charge of the flock.

Hens on the other hand will be much less assertive and generally be more submissive.

Certain breeds have characteristics that can make sexing a bit tougher (such as no comb and hen feathering). But if you look at the overall picture and follow the guidance here you should be able to make an accurate estimation of sex.

How To Sex A Chick

Before we discuss how to sex a chick, you need to know about the development milestones of your chicks.

Because some methods of sexing are only effective at certain points in time (feathering out for instance).

Here is your chick milestones reminder:

Week 1: Their downy fluff will start to molt and their first feathers will be growing in.
Weeks 7-9: They will almost have established the group’s pecking order by now, cockerels may start to crow. Cockerels combs will start to look bigger and redder than pullets too.
Weeks 9-15: This stage is known as the teenage stage. They look gawky and awkward and their behavior patterns emerge.
Weeks 16-20: Now their growth spurt is slowing down and they will start to fill out. Around week 13 the hackles and sickles will start to noticeably grow in on the cockerels. Pullets approaching the point of lay may start to squat.

Watching your chicks go through these changes will help you determine their sex.

Let’s now look at some methods you can use to determine whether your chick will be a hen or a rooster.

Sex link chicks are a product of two separate breeds.

They are specifically bred to be able to be sexed as day old chicks.

A good example of this is the Golden Comet.

The Golden Comet is made by pairing a Rhode Island Red rooster with a White Rock female. The male chicks will have a light yellow down while the females will have a reddish colored down.

Just remember though that sex linkage only works on the first generation of chicks. If you were to breed two of the chicks to produce a second generation you would not have sex linked chicks but hybrids.

This method works well as long as you know whether or not the parents of the bird are fast or slow feathering.

It does not work for all breeds.

If a fast feathering male is mated with a slow feathering female, the female chicks will start to feather out before the boys. This type of sexing needs to be done before the chicks are 3 days old – after this point the boys start to catch up.

The video below is a really good, short lesson to feather sexing.

There are certain breeds that are notoriously difficult to sex, such as Silkies, Breda fowl and Sebrights.

When this is the case your best option is looking closely at their behavior.

After a lot of practice and observation I can pretty much pick out the boys and girls after a day or so of watching them interact.

Girls are always the shyest and most submissive.

They do not like to be picked up and are definitely more reserved until they really get to know you. They will stay at the back of the brooder and let the boys run the show. Hens normally adopt a lower profile stance too.

Boys on the other hand are more certain of themselves, very curious about their world and will move to the front of the brooder. They are bolder in their manner and do not get agitated when picked up. Roosters are more upright too and stand tall.

As you get to know your breed intimately, you will pick out certain little characteristics that help you to sex them. The more time you spend with them as chicks the better you will get at sexing from their behavior. You will eventually be able to sex them accurately within a day or so.

Having auto sexing chickens takes all of the guesswork out of sexing your chicks.

When they are born the females will have light and dark stripes on their body while the boys will have an overall lighter coat and a yellow spot on their head.

Years before autosexing was discovered old time poultry folk knew that certain breeds could be sexed at hatch by the color of their down. The old-fashioned breeds such as the Barred Plymouth Rock have very distinct down patterning that allows you to tell boys from girls thanks to their genetics.

Barred Rock chicks will have a white spot on their heads.

With females this spot is small but in males it is larger.

There are a couple of videos circulating that will have you believing that there is nothing to vent sexing and that anybody can do it!

In fact, special training is required to do this with any degree of accuracy and safety. Sexing chicks requires being able to handle day old chicks with infinite care while determining the sex of the chick.

Roosters do not have external sex organs, instead they have a tiny bump called a papilla which is situated inside their vent.

As you might imagine, this is a delicate process and even the best sexers can get it wrong. Sexing chicks only come with a 95% guarantee of accuracy! 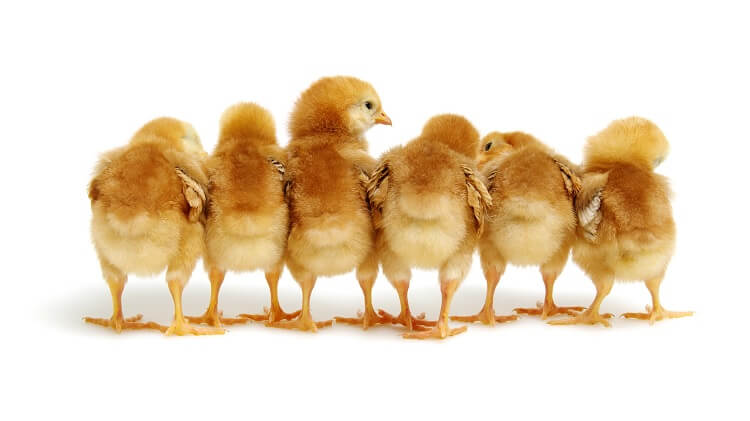 The world is full of old wives tales about most things, and chicken sexing is no exception.

We have included some of the more popular old wives tales below. Just remember that none of these methods have any scientific basis and as such are really guesswork.

Some folks swear that it works for them, however the likelihood of correct sexing is about 50/50.

Some folks believe that the position of the air space inside the shell is indicative of sex. If the air sac is located at the blunt end of the egg then the chick will be a boy.

If the air sac is located at the side of the egg then the chick will be a girl. There is no scientific proof that this works!

This is another popular method and I can remember using a similar method on a pregnant human many years ago.

Our prediction was wrong! Again your odds are 50/50.

You place a needle on a piece of thread and dangle it over the egg. If it moves in a circular manner the chick is a girl, if the needle goes back and forth then it is a boy.

It has been suggested that temperature can influence whether or not you hatch more females than males.

However because sex is governed in birds by genetic input not the temperature, it is unlikely that this has any impact on a chicken’s sex.

This idea probably arose when someone realized that temperature will affect sex in reptile eggs.

Remember, not all of these methods are appropriate for your chicks but you now know the how to part!

All you need to do now is get started and practice.

Give yourself time and share pictures with your chicken friends to help you.

Even the professionals get it wrong sometimes because sexing chickens is difficult!

However when you have worked with similar breeds long enough it will become easier.

Did you manage to guess the correct sex of your chicken? Let us know in the comments section below…

The Cochin chicken is a tremendously popular hen with backyard chicken keepers and enthusiasts. She is one big ball of fluffy love. These gently and docile chickens can even become house pets because they are so lovable and affectionate. Whilst they are not known to Read More →

What is a Pullet: What to Know Before Buying One

When buying chicks you may have heard the term pullets. What are pullets? Pullets are young hens that are not yet laying eggs, but will be soon. They are beyond the chick stage but not yet fully grown adults. Basically, they are chicken teenagers. Many Read More →

Have you ever noticed one of your chickens being pecked? Although many chicken breeds are very friendly and accepting, chicken bullying does exist. Maybe the one being bullied is the smallest or newest chicken. Whilst the occasional pecking is nothing to be concerned about it Read More →