Some people want to know if the eggs they are about to eat are fertile or not.

Others will want to know if the egg is fertile because they are going to incubate it and hatch chicks.

Luckily, there are a few easy ways to tell if an egg is fertilized.

For eggs that will be eaten, it is easy based on the appearance of a small white spot that appears in the yolk of all eggs.

But if you are planning on hatching chicks, you can’t crack the egg open, so how do you tell?

How To Tell If An Egg Is Fertilized 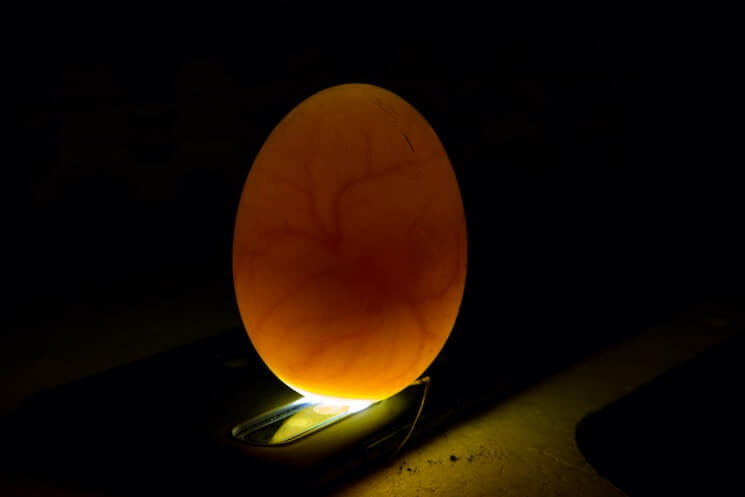 There are a few different ways to tell if a chicken egg is fertile or infertile.

The easiest way is to crack it open and examine the yolk.

In every chicken egg you will notice a white spot on top of the yolk – that is called the germinal spot.

When an egg is unfertilized, the germinal spot is small because it contains genetic material from only the hen. This is referred to as a blastodisc.

With fertilized eggs, the germinal spot is larger and has a bullseye appearance with a clear, white edge. It contains genetic material from both the hen and the rooster and is called a blastoderm. The blastoderm will grow into a chick if the egg is properly incubated.

Although examining the germinal spot is a very easy method for determining if your egg is fertile or not, it does have one big issue. You need to crack open the egg! If you want to hatch chicks then you cannot crack open the egg.

In this case you will need to candle the egg instead.

Candling can show you if an egg is fertile or not without breaking open the egg. The downside to this method is that it requires a little bit of patience. In order for candling to work, you have to incubate the egg for a week first. Candling works by shining a light through the egg while in a dark room.

This illuminates the inside of the egg and allows you to look for structures that indicate the presence of a developing chick.

The presence or absence of these structures can tell you a lot of information about the egg (more on this later).

How To Candle Chicken Eggs

First you will need a light source, a dark room, and your eggs.

In the old days, people used candles as their light source to candle eggs. This is where the name “candling” comes from. Today, it is much easier to candle an egg with a flashlight.

A dark room helps you to see inside the egg once it is lit up. Candling will still work if the room is not perfectly dark. However, the darker the room is, the easier it will be to identify the different parts of the egg when candling.

Make sure not to keep the eggs outside the incubator for more than 30 minutes and only candle them once or twice during their development. Eggs should always be returned to the incubator as soon as the candling is finished. You should also wash your hands before touching the eggs.

Make sure to read How To Candle Eggs: Definitive Day-By-Day Guide.

It is very important to keep in mind that egg candling cannot be done right away.

The only reason you should candle an egg right away is if you want to check for cracks or other damage to the eggshell. This will not tell you if an egg is fertilized but you can remove cracked eggs in favor of eggs that are more likely to hatch.

You should candle your eggs at day 7 and day 14 of incubation. These days will allow you to examine developing structures in a viable egg and track its progress without disrupting the embryo too much.

When candled, an egg with an embryo will have many dark lines in it. These are blood vessels. Follow the blood vessels to the center of the egg and you should see a small, dark shape. That is your embryo.

The presence of an embryo and blood vessels indicate the egg is fertile and developing normally. If your egg does not have these structures within them and instead looks clear, your egg is infertile.

Many people like to candle their fertile eggs again on day 14 to check that the chick inside the egg is developing normally. An infertile egg will look the same on day 14 as on day 7 – completely empty except for the yolk.

At this point you might be able to see specific parts of the developing chick such as toes, eyes, and even a beak.

It is not recommended to candle eggs three times unless you have a good reason to. Being removed from the heat source is not good for the egg and can even mess with the incubation environment.

What To Look For

When you candle your eggs, see if you can identify the following parts of the eggs on the simplified diagrams below. 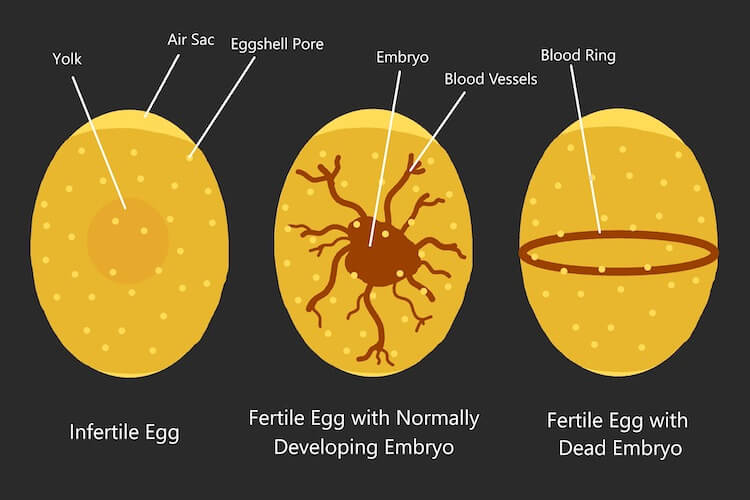 The structures within a candled egg appear dark and silhouetted.

But how do you know if the egg is fertile or infertile?

Use our charts below to help you look for structures that indicate the presence of a developing chick.

Day 1: If you candle a fertile chicken egg right away without giving it time to incubate, it will look clear exactly like an infertile egg. Be patient and try candling your egg again in a week.

Days 4-7: Some embryos will develop more quickly in the beginning and be visible by day 4, while others will not be visible until day 7. Because of this it is recommended to candle eggs at day 7 when all fertile, viable eggs will have an embryo and blood vessels.

Day 14: If your chicken is still developing correctly then it will be much bigger now and takes up more space within the egg. This blocks much of the light from candling, giving the egg an overall darker appearance. Blood vessels are still visible and in some embryos you can pick out distinct features such as a dark spot that will become the eye of the chick.

Day 18: At this point, the egg is close to hatching. The embryo is so big that it blocks out most of the light from candling. One of the air sacs may still be able to be illuminated by candling.

Yolkers: Yolkers are eggs that were not fertilized before being laid. They are clear, easily illuminated, and have a visible yolk in the center. They will not develop into a viable chick and should be discarded.

Quitters: Quitters are eggs that were originally fertile and started to develop into embryos, but “quit” before hatching and died. They are no longer fertile. Quitters may look very different depending on how developed the embryo was before quitting, but all have a characteristic blood ring. A common cause of this is a broody hen leaving the nest.

Why Are My Eggs Not Fertile?

Are you not having much luck hatching eggs?

Before you try hatching chicken eggs you need to make sure your eggs are fertile.

If your eggs are not fertile then you need to watch your rooster and make sure he is actually mating with the hen.

New roosters may take some time to adjust to their surroundings before they mate with all of the hens. It will normally take them about a month to settle in once they are first introduced.

Another common problem is that some roosters may choose a favorite hen and mate less with the other hens, if at all. If this is the case then you could try separating her from him temporarily to see if he will mate with the other hens.

You might also have too many hens in your flock.

If you have lots of hens but only one rooster then he may be outnumbered. Most roosters can handle having somewhere between 6 to 16 hens in their flock, depending on their size. Read about how many roosters you can have for more.

There are a lot of myths when it comes to fertile eggs.

You may have heard that an egg containing a blood spot is fertile.

This is false. Both fertile and unfertile eggs can contain blood spots. This is because the blood spot is not an embryo, but rather blood from the hen’s reproductive tract due to a burst blood vessel. The good news is that eggs with a blood spot are still safe to eat.

Another common myth is that fertile eggs taste different than infertile eggs.

Both fertile and infertile chicken eggs taste the same. If you were to make two identical omelettes – one from fertile eggs and one from infertile eggs – you would not be able to tell which omelet was made with which eggs.

Finally, some people think that fertile eggs are more nutritious than infertile eggs.

This is also false. A hen’s body cannot tell if an egg is fertile or infertile, so she gives all eggs enough nutrients to fully support a growing chick.

Hopefully you enjoyed learning about candling and how to tell if an egg is fertilized. If you want to learn about how they are fertilized then read How Do Roosters Fertilize Eggs.

Candling can be tricky at first but the more you practice the easier it gets.

Even if you do not have a rooster and know that your eggs are infertile, I would still recommend candling them for fun. It is amazing to see eggs from a different perspective when candling, and each eggs looks slightly different due to the speckling of eggshell pores.

Did you manage to tell whether your eggs were fertile or not? Let us know in the comments section below…

What Is Chicken Grit? All You Need To Know

Grit is an essential part of a chicken’s digestive needs. Because they do not have teeth, they use grit to help them digest their food. It also helps strengthen their bones and egg shells. Hens that are fed solely chicken feed and nothing else actually Read More →

In this article we address a fairly common problem found in backyard poultry: egg eating. This is a very annoying habit that may start out quite innocently. A hen gets bored and then pecks at an egg and breaks it, she will sample the gooey Read More →

The egg float test has been around for a very long time. It is a useful and fast way to check if eggs are fresh and safe to eat. The interesting thing is nobody really knows how it came to be and where this test Read More →