If you are looking for a bird that quite literally stands above the rest, then the Indian Runner Duck could be for you.

Runner Ducks are best known for their unique, upright body.

The Indian Runner Duck is a curious breed that loves to explore. They are very entertaining to watch as they forage for any potential snacks. Their foraging abilities make them perfect for pest control.

Keep reading to learn more about this wonderful duck… 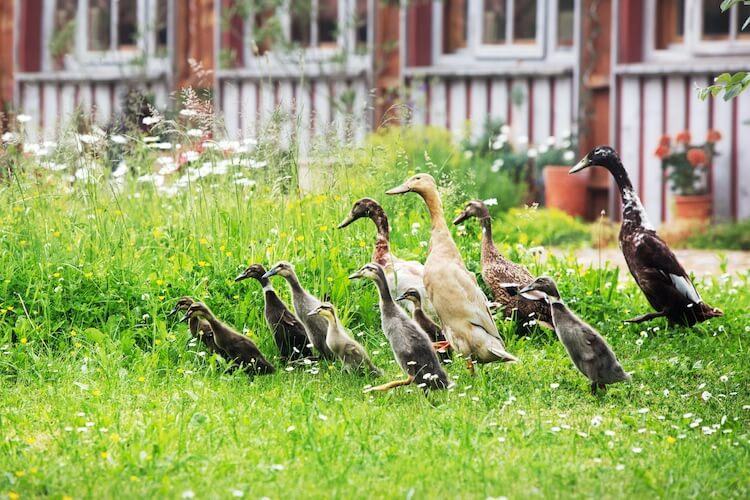 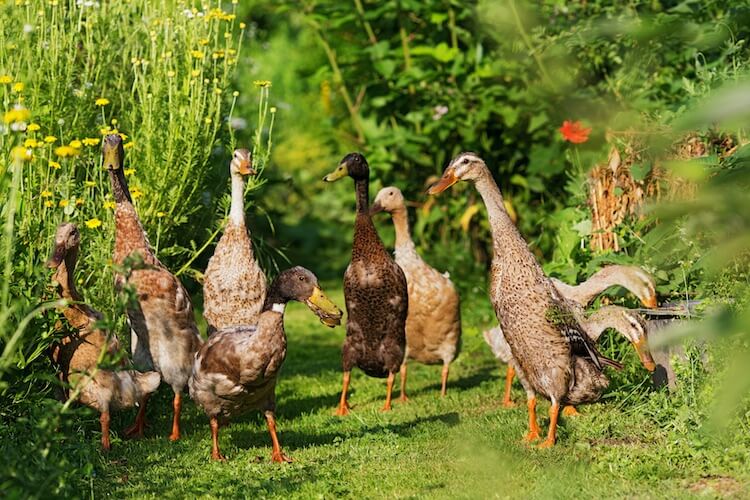 The Indian Runner Duck is a one of a kind duck!

They are best known for their unique appearance and pastel green eggs.

They are very low maintenance ducks and are actually very independent. This breed is also an excellent forager and will eat any sort of worms or grubs they find in the yard. Ducks are perfect at debugging gardens because they are much less destructive than chickens.

The Indian Runner does not require a pond to swim in either, but, given the chance they won’t hesitate to show off their gracefulness in the water.

Ducklings will cost around $10 each. 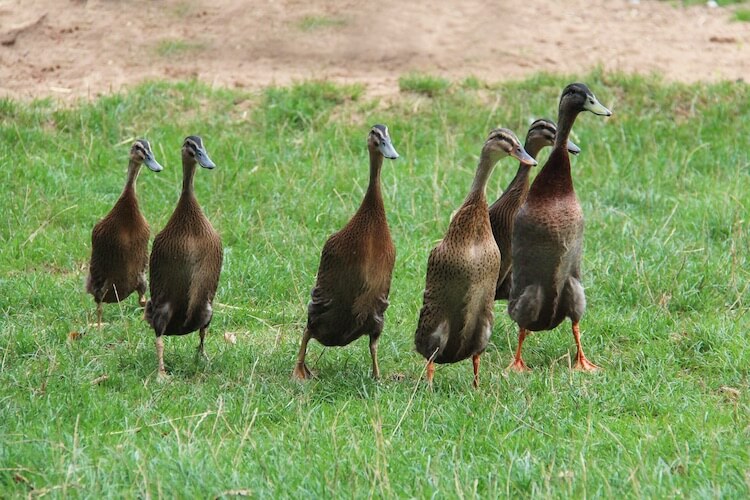 The Indian Runner Duck has a very unique appearance.

They can easily be identified by the very peculiar way they position their bodies.

Runner Ducks stand up very straight and hold their body almost vertically. Their back is long and straight and their head is held high in the air, straight above their body. They are extremely skinny and have a cylindrical body. This has earned them their nickname, bowling pin duck.

Indian Runner Ducks have very small wings and their legs are set further back on their body.

Interestingly, having legs set further back on the duck’s body allows them to walk upright with a funny gait. It even allows them to run quite fast – this breed is not called a runner for nothing!

They have dark brown eyes and a straight bill which can be light yellow, light orange or even black.

You can find Indian Runner Ducks in a large variety of colors including cumberland blue, black, buff, white, chocolate, light brown, dark brown, gray, penciled, and even a brownish shade of green.

The first and most obvious difference is the size.

Males are often bigger than females.

Drakes will also have curly feathers on their tail, whereas the hens will not.

Another giveaway is listening for quacks. Hens are the only ones who make the iconic quack sound, while drakes make a more quiet, raspy sound.

The Indian Runner is a fairly light duck. 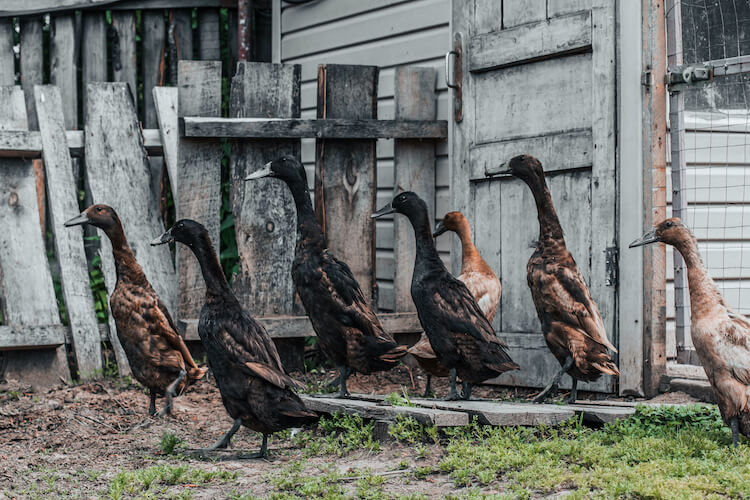 Indian Runner Ducks are much more independent than other ducks.

They love to actively forage in their surroundings. Compared to chickens, ducks are much gentler when scavenging for tasty treats, so they are a perfect form of insect control for your garden.

Interestingly, Indian Runner Ducks do not need a pond.

They are very graceful swimmers and enjoy swimming, though, so if you have the space consider giving them a pond.

Of course with this duck you can expect lots of pastel green eggs. Although they are most popular for their egg laying, they are still a dual purpose breed.

Do not expect to see them flying around your yard.

Their wings are too small in proportion to their body to fly.

They also do not waddle. This is because their legs are set further back. Runner Ducks can however run pretty fast!

They tend to be more skittish than other ducks though, which makes them easy to scare. Despite their timid nature this breed is wonderfully social and can be trained to be less easily frightened over time.

If you want to have a more hands-on relationship with your flock, they tend to need more human input than other breeds. You should handle them often as ducklings and spend lots of time with them.

Indian runners are not loud ducks either.

They are well known to be independent foragers and they like to spend their time hunting for any hidden snacks. This makes them great for insect control. It is very entertaining to watch their quirky walking style as they curiously explore their surroundings.

It is rare for a hen to go broody.

In the rare case that she does go broody, it is known that Indian Runners are not good mothers to their young. If you would want to raise ducklings, while the mother may sit on the eggs, after hatching you will need to separate them and raise the ducklings yourself.

Indian Runners are famous for their egg laying abilities.

They can pretty much lay an egg every day, which adds up to around 300 to 350 eggs a year.

Indian Runner Ducks’ eggs are large and are a pretty pastel green color. Duck eggs are highly sought after for their rich flavors which makes them exceptional for baking. Read Duck Eggs vs Chicken Eggs for more.

They can start as early as 4 months old but they will lay more regularly from 6-7 months.

These ducks tend to quietly quack amongst themselves.

The females are louder than the males and won’t hesitate to quack. Interestingly enough, hens are the only ducks that make the iconic quacking sound. Drakes are quieter than the hens and make a noise more similar to that of a raspy peep.

They are not known to be prone to any major illnesses. This breed is pretty hardy and is not sensitive to the summer heat or the winter cold either.

The biggest point of concern for Indian Runner Ducks is worms.

You should get your flock dewormed by a veterinarian rather than doing it yourself.

Unlike most other ducks Indian Runners do not need water to breed. Even though these ducks do not require a pond, they are graceful swimmers and enjoy bathing in the water.

You will need to fence off their free range area. Having a fence will not only prevent your flock from wandering off, but it will stop predators from harming them.

There is no danger of ducks overeating so free feeding is the easiest way to feed them.

A classic layer feed containing anything from 15%-19% protein is suitable.

Indian Runner ducks are active foragers and they will search their roaming area, looking for any potential snacks. Ducks will scavenge a lot to eat within their environment. Anything from grubs to even fruits and vegetables could be considered a snack.

However having such a wide palette can cause issues. Make sure to check for any health hazards and non-edible items that they might swallow.

Having access to clean drinking water is a must too.

If you are raising ducks and chickens together then be cautious with medicated feed. If your chicks are fed medicated feed, the ducklings must be fed separately because medicated feed is highly toxic to them. It is also important that ducklings have a sufficient source of niacin in their diet.

Indian Runner Ducks are incredibly social birds and prefer to be kept in groups.

They do well in confinement but they will need opportunities to stretch their legs outside of their coop.

It is recommended to have a duck house with about 4 to 6 square feet per duck. This will provide ample space for your ducks.

They will need a duck house to sleep and lay their eggs in.

Inside of the duck house, roosts are not needed. Unlike chickens, ducks do not need roosts to sleep, ducks will instead sleep together on the ground. Make sure to provide clean piles of bedding so that your ducks will be comfortable. Ducks also do not need nest boxes to lay their eggs in, and they prefer to lay on the ground. In their duck house make sure to provide a corner with clean bedding so your ducks can lay their eggs.

As for outside space around 10 to 25 square feet per duck is recommended.

It is well known that Indian Runners prefer to forage, so the more space the better!

Indian Runner Ducks are one of the oldest domesticated ducks in the world.

Ancient hieroglyphics have been found on the walls of Java temple ruins; these drawings depict a slender, upright duck, which indicates that Runner-type ducks have been around for over 2,000 years.

They come from Indonesia and were used by farmers to clean out rice paddies by eating any pests found among the fields. At night the farmer would bring them back home to their enclosure. In the morning, eggs were gathered and the flock was driven off again for another day’s foraging. Over the centuries, these conditions have selected ducks that were good walkers, excellent foragers, and prolific layers.

The first record of an Indian Runner duck in Britain is from the 1830s. British artist Harrison Weir described the breed in his book, Our Poultry and All About Them (1902). Weir referred to them as the ‘Penguin Duck’ and the term ‘Indian Runner’ was used for the birds who had been crossed with the British domestic ducks in the late nineteenth century.

Because of their egg laying ability the pure Indian Runner Duck was crossbred to produce designer ducks such as Khaki Campbells, Buff Orpingtons and the rush of Light Duck breeds that now fill commercial farms.

Indian Runners were crossed with domestic ducks so much that they were almost wiped out in Britain by the beginning of the twentieth century.

These ducks became popular with homesteaders around the late nineteenth century.

They are still popular today because of their egg laying.

Indian Runner Ducks have quirky personalities and are very friendly.

They have earned their name because they are able to run much faster than other breeds of ducks. They are very entertaining to watch as they explore their surroundings with this theatrical running style.

Their unmistakable body shape comes in a wide variety of beautiful colors.

On top of their egg laying, this breed is very easy to care for and they do not require a pond. They are known to be suited for any sort of weather and are hardy against any illnesses.

Also they have no chance of flying away and are excellent foragers!

Why do you want to keep an Indian Runner Duck?

A chicken coop is one of the most important parts of raising healthy and happy chickens. Walk-in chicken coops offer your chickens an off the ground coop, external nesting boxes and high roosts. These are features not commonly found with traditional coops. They also make Read More →

When people first see or hear a Guinea Hen their reaction is usually to ask what is that? Guineas have a unique alarm call when they are disturbed! They are also very odd looking. Guineas look nothing like chickens and have very different personalities too. Read More →

The Cochin chicken is a tremendously popular hen with backyard chicken keepers and enthusiasts. She is one big ball of fluffy love. These gently and docile chickens can even become house pets because they are so lovable and affectionate. Whilst they are not known to Read More →