Jersey Giants are the largest chicken breed in the world.

The only other breed that comes close is the Brahma!

Back in the late 1800s this breed was very popular however once chicken production was industrialized the Jersey Giant fell out of favor.

Fortunately in recent years though this giant chicken has found a new wave of popularity among homesteaders and backyard chicken loves.

This dual purpose heritage chicken is a very hardy breed that can tolerate a wide variety of climates. 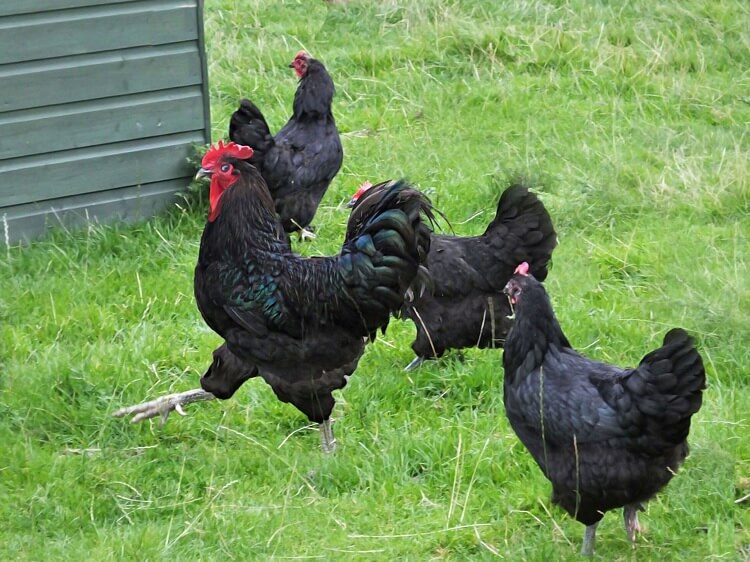 The Jersey Giant was created here in the US in the late 1800s.

They were originally created as a dual purpose chicken that could lay eggs.

Newer breeds that matured quicker surpassed the Giant and the once popular chicken became a rare sight.

Fortunately in recent years they have seen an upsurge in their popularity again thanks to the smaller poultry breeders and backyard flock keepers.

The Jersey Giant is a regal and imposing chicken to behold.

This giant chicken stands around 2 feet tall and can weigh up to 15lb.

Initially small children may be intimidated by their size but they soon grow to love them!

They make a wonderful addition to backyard flocks as their calm and docile nature helps bring order to the flock dynamics.

Overall they make wonderful family chickens as they are gentle even with children. 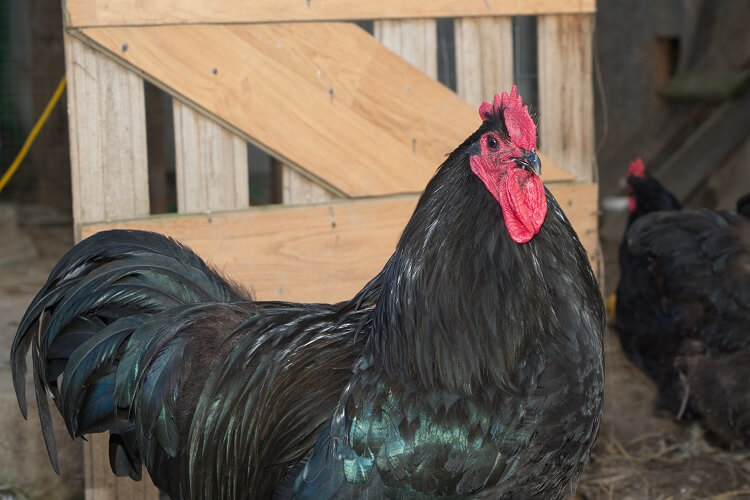 The most striking thing about Jersey Giants is their overall size!

They can easily be described as statuesque.

Jerseys can stand up to two feet tall and have a large framed body.

They are slow growers so it usually takes around one year for their body to fill out.

Their large body forms a U shape with their backs having a slight curve. You will notice roosters have a slightly more upright stance than the hens.

Feathers are tight to their body – this is a genetic gift from the Java side of the family. They have a single comb with red wattles and ear lobes. Their beak is a black/horn color and their eyes are orange/brown in color.

All varieties have yellow soled feet and skin.

Some folks get confused between Australorps and Jersey Giants – the color of their foot sole is a good way to tell them apart.

Australorps have pinkish or white feet whereas this breed have yellow.

They are one of the largest chicken breeds around.

There is also a bantam variety with roosters weighing 38oz and hens weighing 34oz.

There are three color varieties registered with the American Poultry Association.

The black variety was the first color of this breed and recognized in 1922.

On occasion white sports were found among the black flock. These were bred together to get a pure breeding white bird. White Jersey Giants were registered in 1947.

A Mrs Golda Miller noticed a variation of plumage color in her flock and loaned the pullet to another breeder who was trying to make a blue variety. He was successful and the blue variation was registered in 2003.

The three different varieties have a slight variation in leg colors:

What Is It Like To Own A Jersey Giant?

Jersey Giants prefer to be able to free range.

You will often find these chickens gracefully patrolling the yard.

They are not flighty or overactive and they enjoy hunting up bugs and other goodies to add to their diet.

If you cannot let them free range then make sure their pen is large enough to accommodate them adequately. Read how much space do chickens need for more help.

They can fly a little but rarely do so unless they are alarmed or frightened.

This breed is a gentle giant.

They are not mean or obnoxious to humans or other chickens.

This docile breed will shy away from any disputes in the pen. Most other breeds will not bother them due to their intimidating size. Of course different strains of this breed will vary in some way from each other but rarely are there any reports of a mean Jersey Giant (roosters included).

Hens make good mothers once they decide to set.

Sadly however they are so large that they often break the eggs before hatching or simply stand on the chicks accidentally.

The Jersey Giant was created to be a dual purpose breed with an emphasis on meat.

So as you might be expecting their egg production is moderate.

You can expect 2-4 eggs each week which is roughly 150-200 eggs per year – these eggs will be large and brown.

However, as with most chickens the eggs get larger as the bird gets older. So you will be seeing jumbo sized eggs from your ladies in fairly short order.

Jersey Giant Chickens are usually quiet chickens and are not known for their raucousness.

The only exception to this is the rooster’s crow and the egg song – otherwise they are no louder than the average chicken.

This makes them ideal for urban settings as they are unlikely to upset the neighbors. 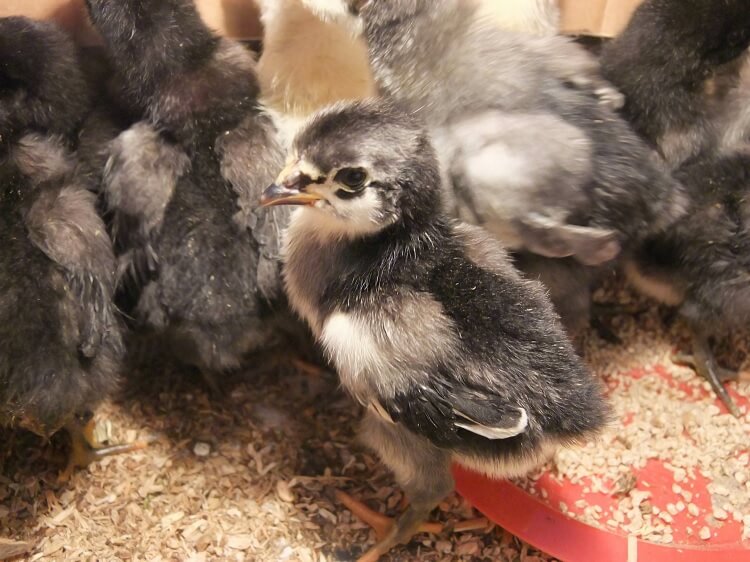 The Jersey Giant was originally bred as a large roasting chicken.

As large birds you will need to make adjustments to their coop and run (more on this later).

However for the most part this is an easy chicken to care for.

Interestingly if you are going to hatch your own then you should wait a bit longer than the usual 21 days for the eggs to hatch. This is one reason why Jersey Giant eggs should be separated from standard eggs if you are using an incubator.

It is not uncommon for the eggs to require a couple of extra days for incubation so be patient.

This is a large framed chicken.

They are vigorous birds that do not have any significant health problems.

Sometimes they can have issues with their legs and feet which is caused by them jumping down from high perches. You just need to make sure their perches are lower to the ground.

Otherwise they only suffer from the usual array of chicken pests such as lice, mites and worms.

These chickens have a low Feed Conversion Ratio.

They require a good deal of feed and do not really start to fill out their huge body frame until they reach around six months old.

By this time they should weigh around 10lb (depending on the stock you have purchased).

They do best with a free feeding schedule and enjoy being allowed to forage for extras.

Giants are large chickens and require a lot of elbow room.

Each one of them will need 6-8 square feet of coop space.

Also as they are quite tall you will need to make sure that they have enough head room too. Some can stand up to 26-28 inches tall so keep this in mind. Ideally the ceiling of the coop will be at least two feet above their heads.

As for roosting space you should give each chicken 15-18 inches of perching space.

Perches should be placed lower to the ground or have ramps leading up to them.

Jersey Giants are heavy birds and jumping down from high perches can lead to leg or foot problems, so perches should not be more than 2 feet from the ground.

Ideally they should not be placed higher than one foot from the ground and ground nesting boxes are acceptable.

If your Jerseys turn broody then put plenty of nesting material in the box to try and protect the eggs. Sadly because these hens are so heavy they often break their eggs, so the more nesting material the better.

Finally do not forget about the pop door – this will need to be larger than average to accommodate the chickens.

This breed enjoys roaming and foraging for their food.

As adults they are unlikely to be picked off by hawks as they are simply too big for the hawk to manage.

If your birds need to be totally confined and kept in a run then you need to make sure they have enough space.

Each chicken will need 10 square foot but as always, more is better.

If the coop space is on the tight side then you will need to compensate with more outside space to prevent any mischievous or nasty behaviors arising from winter boredom.

These large chickens do not fly well so they will not need high fencing to keep them contained.

The Jersey Giant is a chicken that was designed to fulfill a market need back in the mid to late 1800s.

People had large families at this time and they wanted a larger chicken in order to feed the family.

The largest chicken of the time ran to about 8lb of weight and turkeys as we know them now were not commonly available at that time.

Two brothers (John and Thomas Black) of New Jersey set themselves the goal to produce a new breed of chicken. This new breed of chicken needed to be not just large but also cheaper than turkeys. They began with a mix of black Javas, black Langshans and dark Brahmas. It is most likely that other breeds were added to the mix but we do not know what they were.

The birds that were produced from this breeding program were originally called Giants. They were formally labeled Jersey Giants in 1917 to honor the state of New Jersey.

Unfortunately during time same time that Jersey Giants were being developed (latter part of the 1800s), turkeys were developed commercially and became widely available to folks.

Although they had become popular with many breeders and producers, their commercial success was overshadowed by the availability of the larger turkey.

The original chickens were black in color but since then a white and a blue variety have been developed.

Jerseys were listed on the Livestock Conservancy as critically endangered in 2001 but thanks to a renewed interest in this breed they have since been moved to the watch list.

As a heritage breed the Jersey Giant has much going for it in the homesteading arena.

They are also a great candidate for 4H projects or other farming programs that encourage good animal husbandry.

Although the Jersey Giant is more expensive to keep than standard sized birds like Blue Laced Red Wynadottes, they are well worth it if you have the time and money.

Hens will come to lay at around 28 weeks old and will lay beautiful brown jumbo eggs.

15 Most Common Ways To Accidentally Kill Your Chickens

Chickens are naturally curious animals and they love to stick their beak into things! This curiosity can get them into trouble so as the flock keeper it is your responsibility to keep them as safe as you can. While none of us would intentionally harm Read More →

Dominique Chicken All You Need To Know: Temperament And Egg Laying