The Leghorn has an outstanding reputation as a reliable egg layer.

We will never know for sure about the true origins of this hard working Italian chicken but without her the egg industry would not be the same.

This egg laying super star changed the egg industry forever during the 1900s.

However the days she is better suited to backyards and small flocks.

Do you want to learn more about this self-sufficient chicken? Then keep reading our article below… 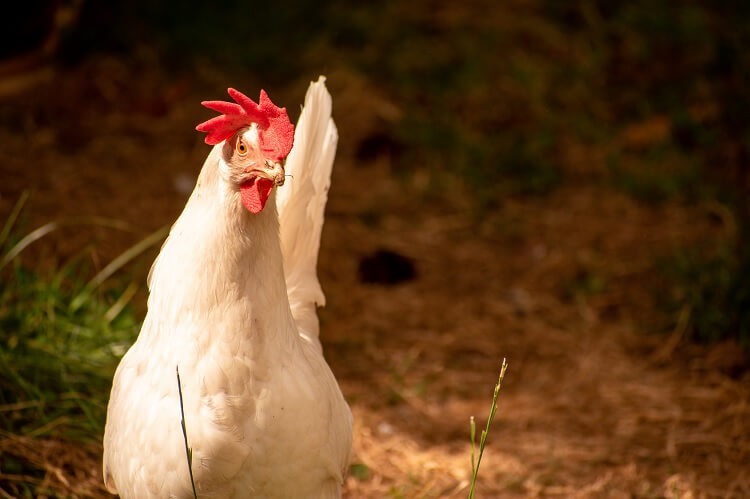 The Leghorn (pronounced Leggern in the US) chicken has a long and obscure ancestry.

They originally come from Italy and were refined over the years – they eventually became well known for their egg laying ability.

In more recent times this breed has excelled in backyards and small homesteads.

Whilst each color variety of Leghorn Chicken will lay a good amount of eggs, it is the white Leghorn that is the superstar of the family.

She will lay for many years at the rate of 4-6 eggs each week.

Sadly this ability has been exploited and many of these beautiful birds spend their entire lives in cages or giant barns rarely seeing the light of day.

In small backyard flocks she is a great forager and loves nothing better than to spend the day searching for food and scratching in the dirt. They can also fly well and like to perch on high points and watch for predators.

Just remember if you would like to keep Leghorns you will need plenty of space for them.

They are not pet chickens and do not like being held – in fact they can get quite nervous around humans they do not know.

However overall she is a sweet hen once she is comfortable she will reward you with lots of beautiful white eggs. 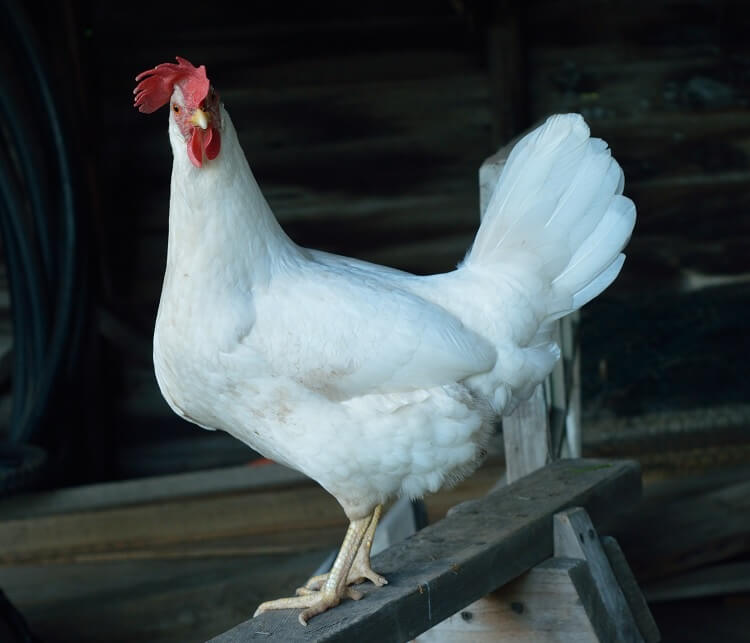 Most Leghorns are easily identified by their huge floppy combs and large wattles.

This is their cooling system and when they get too hot these appendages let out heat to cool them down.

However these large combs can also be a problem, especially in very cold climates where they can get badly frostbitten.

However in the US you can get rose comb Leghorns – this is recommended if you live in the northern US states.

Their body is quite slender and their back has a pronounced U shape profile. They have an upright stance and their tail is held fairly high.

Her plumage will vary depending on the variety (more on this later).

Leghorns are a touch on the small side for a standard chicken.

They have a trim and slim profile with hens only weighing 5-6lb and roosters usually weighing around 7½-8lb.

There are several different plumage colors to choose from with Leghorns.

White is by far the most popular, however you will also find them in brown, black, red and buff.

In total there are 12 different varieties and each country has their own list of accepted colors. Red black tailed, black and silver gold duckwing are also fairly common in the US.

Some of these varieties are very hard to come by and can only be found from private breeders.

What Is It Like To Own A Leghorn Chicken?

They are very active chickens.

You will often find them roaming around outside looking for tasty snacks. She loves to work for her food and is very efficient at it.

They thrive with fresh air, grass and space.

One thing to know about keeping Leghorns is that they are very good at flying and can easily clear a 10 foot fence.

So If you do confine them you will need to cover the roof otherwise they will fly out!

Leghorn Roosters are very useful as they are very observant for predators and will help protect your flock.

Finally it is worth knowing that they are not cuddly family pet birds. Their exact behavior will be determined by how you raise them, but they are best described as independent, flighty and nervous with humans.

Leghorns are independent chickens that are quite nervous and flighty around people they do not know.

They are not lap chickens and are not suitable for children to play with.

These independent chickens prefer to be free rangers and will thrive when given lots of space.

Roosters are very protective of their ladies and often seek out high spots from which to stand guard and warn the flock of danger.

Although they have been called unfriendly they really are not. They are simply independent and do not enjoy close human contact such as being picked up or held.

This natural independence can be off-putting to many folks and for this reason alone they are not recommended for beginners. 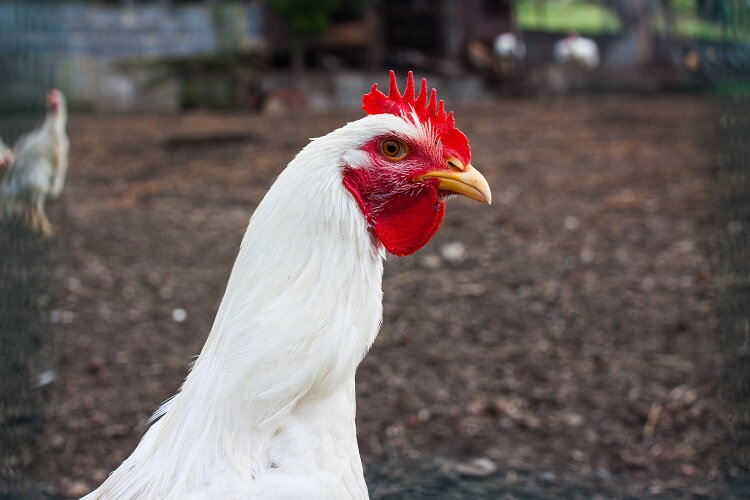 The amount of eggs they lay will depend on their plumage color.

On average this hen will lay 4 large eggs each week, however the white variety can lay 5-6 eggs per week!

Regardless of their plumage color they will all lay white eggs.

These girls are early to mature but won’t lay before 18-20 weeks.

This chicken is best described as nervous, flighty, noisy and raucous.

Leghorns are really not suitable for an urban environment with close neighbors. 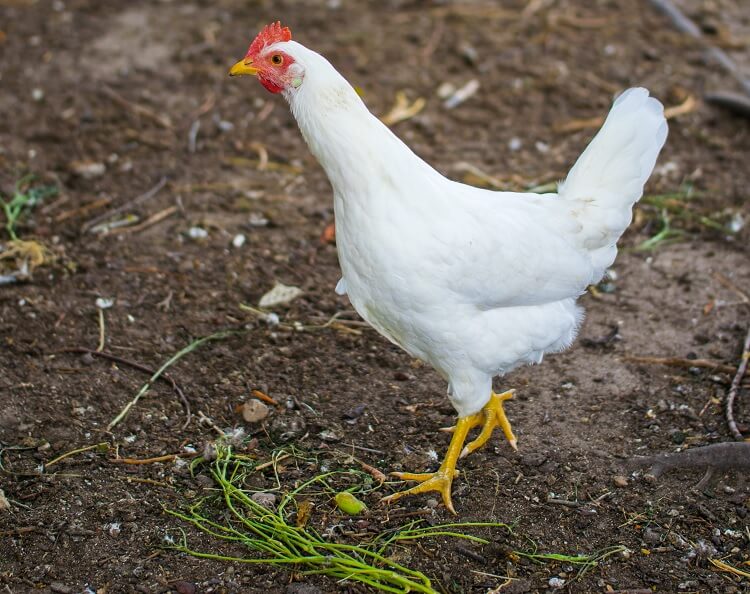 They can tolerate both cold and hot climates and are self-reliant chickens.

Whilst they can tolerate the cold these chickens originally come from warm/temperate climate so this is where they do best and thrive. As with all poultry you will need to monitor for parasites such as lice, mites and worms.

You have the choice of treating on a regular basis or treating when you see a problem.

It is recommended that you raise Leghorns away from other chickens since the adolescent birds can be quite a handful until they settle down.

A big bonus to this spritely chicken is the fact that they are light eaters.

Plus if you let them free range your feed bill is going to be very reasonable as they are avid free rangers and will glean lots of additional fresh food to supplement their diet.

Once your Leghorns are fully grown the standard 16% layer feed should do them just fine for most of the year.

When the molt season arrives make sure to increase the protein content to around 20% to help them through this tough time.

They should also have both oyster shell and insoluble grit available in separate containers. 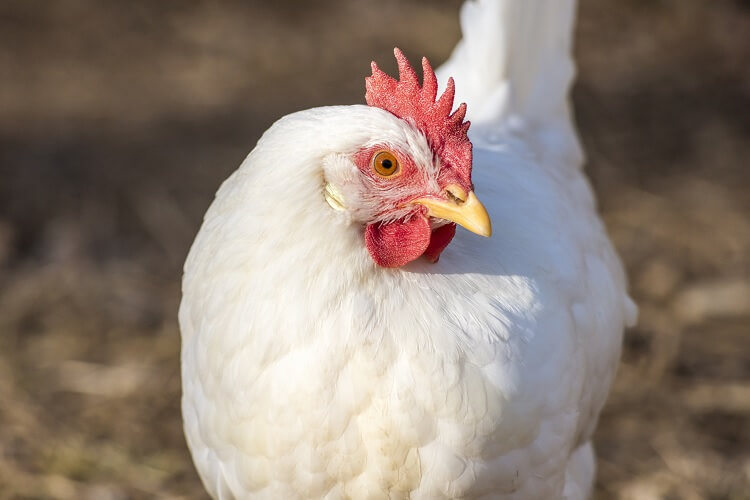 For each Leghorn you will need to give them 4 square feet of coop space.

Whilst they may be on the small side they are quite active and need enough space to move around in as they are a restless bird.

For roosting space the standard 8 inches of roost per chicken will be enough for these ladies. It will give them enough space to spread out a little in the summer, or snuggle up in the winter months.

Finally 12×12 inch nesting boxes will be needed. The size is large enough for them to move around in but too small to allow double bunking. The practice of two hens in a nesting box may look cute but usually leads to mucky or broken eggs.

This is an active chicken that enjoys free ranging and flying.

If you are keeping them in a pen do not be surprised to find them perching in your trees. To discourage them from roosting in the trees you should keep them in the coop until they learn that the coop is where they sleep.

They tolerate confinement remarkably well for such an active breed.

Just give them at least 20 square feet of space per Leghorn and they should do well enough.

Try to keep them active and busy with a variety of things for them to explore. Perches of different heights, tree stumps and piles of leaves will all help them stay busy. 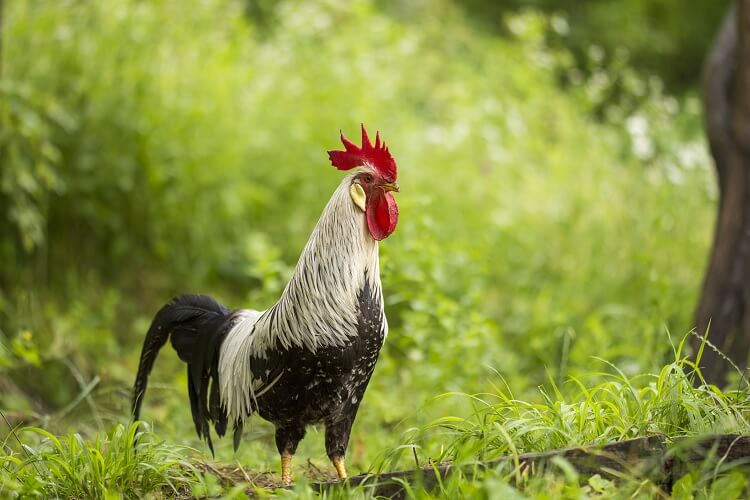 It is thought that these chickens come from the Tuscan countryside of Italy however nobody can be 100% of this chicken’s ancestry.

Most likely this is a landrace bird that evolved to suit the landscape. They evolved in the Italian countryside which was a hilly but fertile area that was suitable for agriculture and with areas of scrubby hillsides and coastal margins.

It was in these fertile valleys that the Leghorn met humans.

Around 2000 years ago the Romans farmed chickens for their eggs and meat. They were also used as fortune tellers.

Roman generals would consult with the chickens and their keepers before certain events such as a battle. If the chickens ate well and appeared unconcerned, all was well for the upcoming event. If not then the event may have been delayed for a more auspicious day.

We can be fairly certain that the farmers would have crossbred certain strains of the landrace fowl to get a better chicken. We also know that this breed was originally known as Livornos or Italians.

The Leghorn first made their appearance in the US in 1852.

They were brought over by a seafaring captain – he brought with him brown Leghorns.

These original chickens had the large floppy combs that we see today, but American breeders introduced a rose comb to this breed to better withstand the harsh American winters.

In more recent years they have been split into two different strains:

We are all used to seeing the white Leghorn with her comically floppy comb.

After reading this article you now know that there are many more varieties to choose from.

However if you are looking for an egg laying superstar like Easter Eggers then pick the white variety as they are the most productive of all.

Just remember though this breed is not for everyone.

As pullets they can be very manic and obnoxious – but if you work with them and try to hand feed them they will settle down as they grow older.

Once they mature they can be marvelously independent and if allowed to free range they will keep your yard free from insects and seeds.

If you are an experienced chicken keeper these birds can be delightful to raise and keep simply because they are so independent.

Did you know that there are only 14 breeds of black chicken? Many folks think of black as a drab or boring color. However blackness can be seen as shades of iridescent greens and purples in the right light making the plumage unique and breathtaking. Read More →

The Complete Guide To Quail Eggs

Quail eggs are traditionally thought of as an expensive side dish reserved for the wealthy. However things have changed over the last few years and quail eggs have become easier and cheaper to buy. Quail too have become increasingly popular with homesteaders as raising these Read More →