The life cycle of a chicken is quite fascinating for most poultry fanatics!

Just thinking that an egg can hold a tiny germ that in twenty one days can hatch into a beautiful little chick still amazes me.

To think that this chick will grow into a plump hen who in turn will lay eggs to continue the evolution of the flock is a small daily miracle.

If the chick should be a rooster then perhaps one day he will be master of a small flock himself and be charged with taking care of the ladies. 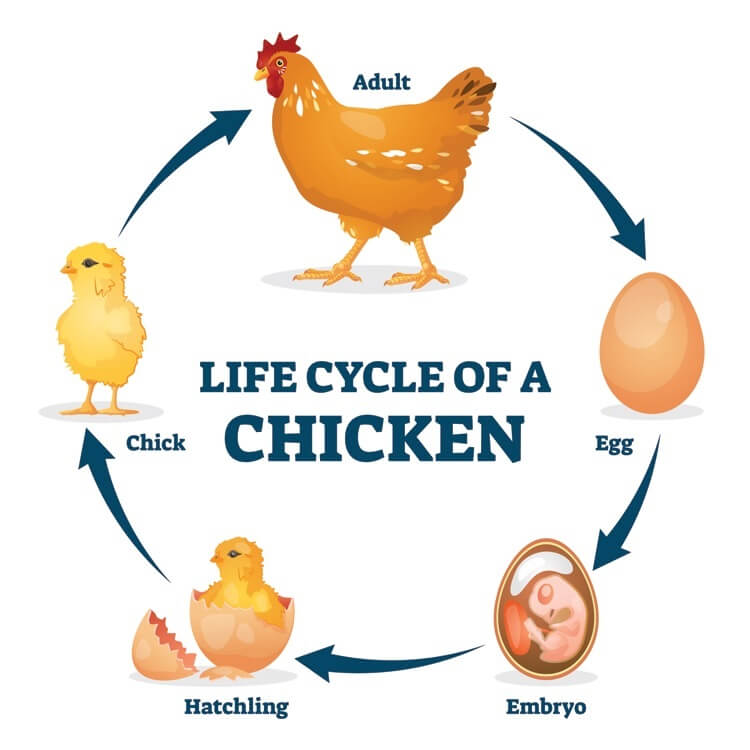 Life Cycle Of A Chicken:

The first stage of the chicken life cycle is the egg getting fertilized.

Usually roosters will try to court the ladies and put themselves forward as the best rooster for the position of flock husband.

However hens are quite calculating in their selection of a mate.

They consider things like appearance, attentiveness and food finding. All of these things give her some idea of the health of the rooster, his ability to find food and whether or not he will make a good flock leader.

Mating behavior involves rituals such as tidbitting where the rooster will find something interesting and start calling the hens. He will indicate the food by picking it up and dropping it repeatedly until the hen comes to investigate.

The rooster that wins out will usually be the healthiest and best of the bunch.

He will perform the courtship dance to indicate his interest. He will drop one wing to the ground and shuffle around the hen. If she is interested she will squat in submission, if not she will walk away or ignore him.

The mating is a brief and precarious thing.

The hen has squatted in submission and lifts her tail end up to meet him. At this point she will evert her cloaca ready to receive the sperm. The rooster will evert his cloaca allowing his papilla to deposit sperm inside the hen’s body.

All of this takes less than a minute and when they are done she will shake out her feathers and go about her business as usual.

Once the hen and rooster have mated the sperm will begin its long journey to fertilize the egg.

If the sperm does not implant itself here the egg will be sterile.

The above video shows the development of the chick very nicely.

However for those who like a chart to go by one is laid out below – the chart gives the highlights of each day’s development of the chick.

If your chicks are in the incubator then they can stay there for up to 48 hours after hatching. If you have a broody doing the job she will have them up and moving fairly quickly. 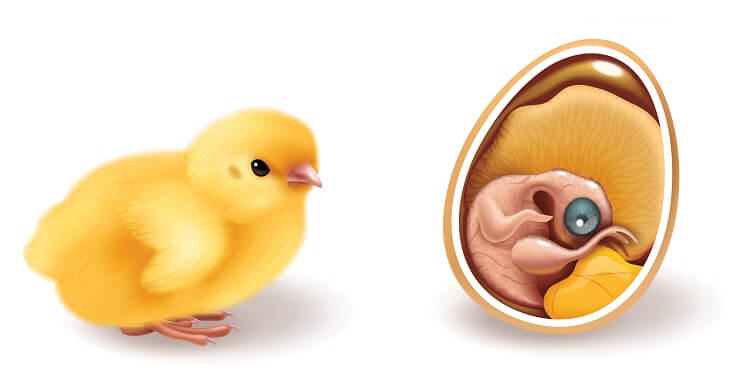 Once the hatched chick is dry and fluffed up they can safely be moved to a brooder area. Once in the brooder the chick should be introduced to water and feed and placed under the light or brooder plate.

The food should contain enough protein, vitamins and minerals for sustained growth over the next several weeks.

These first weeks of life will see an amazing rate of development and growth. Some breeds will grow faster than others. For example Cornish crosses grow so amazingly fast that at 8 weeks or so they weigh a hefty 8-10lbs.

A more sedate growth pace is usual for the average chick. For example a Rhode Island Red chick weighs just over 1oz at three days and by week number six will weigh 1lb.

The chick is initially covered in a fine down coat.

They will start to lose this coat at 6-8 days of age – this first little molt will be finished by week number four.

The second small molt will start around 7-12 weeks. At this point the feathering will start to differentiate the boys from the girls. 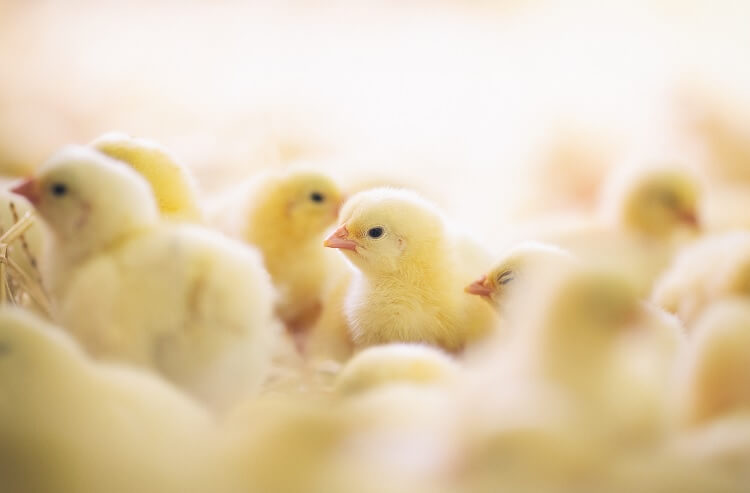 Chicks learn things very quickly especially if they are raised by a broody hen. She will teach them all the good things to eat, things to stay away from and dangers to be aware of. A mother hen and her chicks is an endearing sight.

Just remember do not fuss with her chicks – she is in full protective mode and may attack you.

If you are raising chicks without a broody and want them to be friendly with you then talk to them. The more time you spend with them talking and hand feeding the tamer they will become and the easier to handle.

Short trips outside can start as early as 8 weeks or when they are fully feathered out. They should be protected from predators, hot sun, strong winds and drafts. You should watch them closely and if they show any signs of distress they need to go back inside. 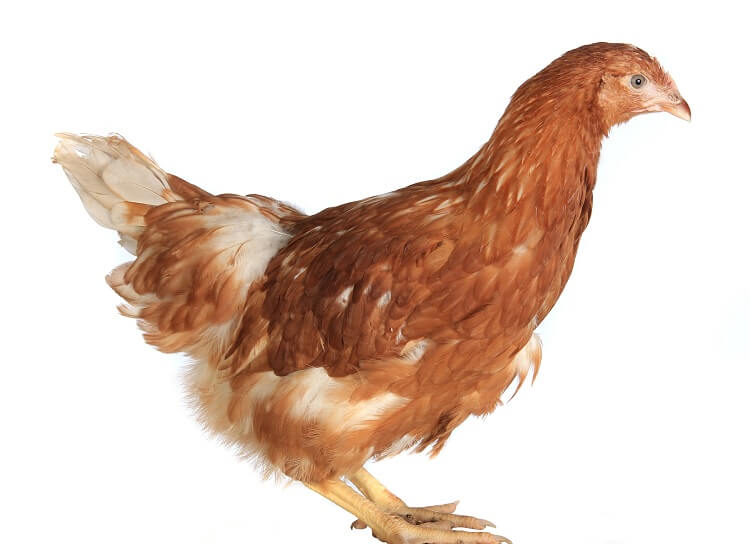 A chick becomes a pullet or cockerel at four weeks of age and lasts for around 12 weeks.

This can be considered the awkward teenage stage – they look artless, gawky and quite unsure of their place in the world.

It will be during this time that the sexual differences will become apparent in most breeds.

Once you have determined the sexes it is time to separate them. It is also the time that they start to assert themselves and find their place in the pecking order.

The pecking order is a hierarchical system in which chickens self organise themselves into an importance rank.

Every bird knows their place in the flock and birds can move up or down the ladder depending on a variety of things. Such behavior usually consists of pushing, chest bumping, stare downs and pecking – rarely does this behavior result in serious injury.

Once the youngsters are about two thirds the size of the adult chickens you can start the introduction of the new chickens to the older ones. This should be done on a gradual basis in an area that has plenty of room and hiding spaces.

The young chickens will now have to learn their place in a newer and larger pecking order. It may look brutal but try not to interfere unless it becomes a bloody affair.

Cockerels may try to challenge the other roosters but they are usually quickly and firmly put in their place and will remain subordinate until the head rooster starts to fail.

The same will happen with the pullets.

Older and higher ranking hens will ensure that the social order is kept and the pullets will have to work their way up gradually. 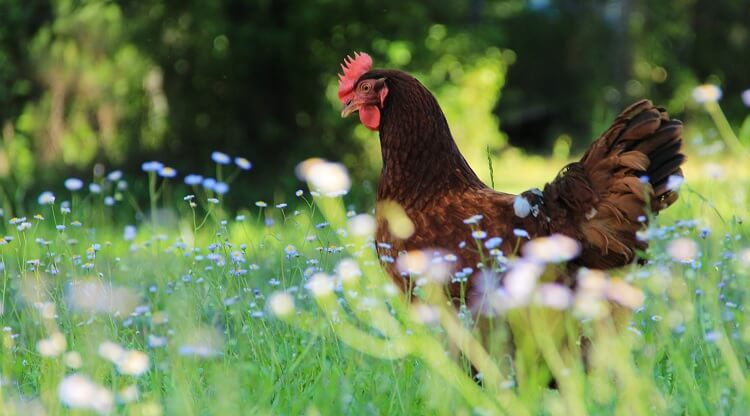 Now we come to the final stage of their life cycle.

There is a slight difference of opinion in the poultry world as to the difference between a pullet (teenager) and a hen (adult).

Some people will say that a hen under one year of age is a pullet, whilst others will tell you that once a pullet has laid her first egg she becomes a hen. Regardless of which definition you choose – it all boils down to sexual maturity.

A cockerel becomes a rooster once he reaches sexual maturity.

Hens usually start to lay around the twenty week mark on average. Their first eggs will be small, infrequent and possibly misshapen.

You do not need to worry.

Their egg machinery is new and needs time to get up to production speed. You may need to train the new girls to lay in the nest boxes, but if you have older hens they should just catch on and use the boxes.

During this time pullets should be transitioned over to layer feed somewhere between 16-20 weeks for optimum egg quality.

The layer feed has reduced protein but is higher in calcium and other nutrients to ensure good health and strong egg shells.

It is also wise to offer free choice oyster shell in a separate container for the ladies. Not every hen has the same calcium needs so if they need more they can help themselves. 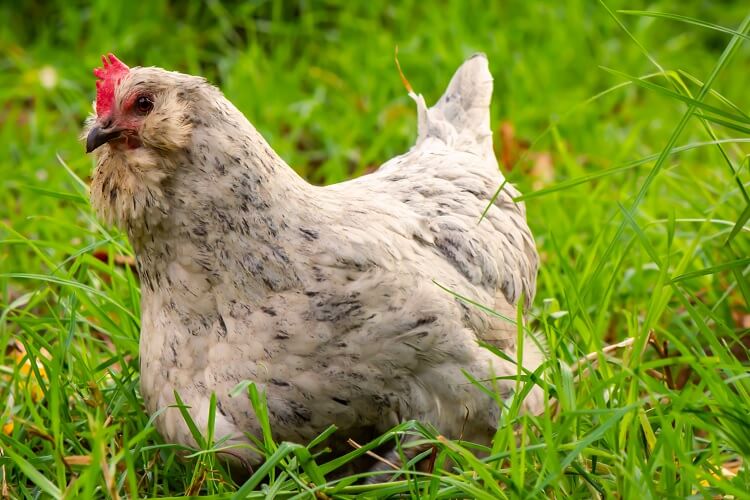 While some chicks may die within a few short days of hatching, the majority will survive unless they have something drastically wrong with them. Problems such as genetics, incubator problems or infections can all cause high mortality rates in chicks – while the occasional death is sad it is not cause for alarm.

The biggest dangers to young chicks and pullets is coccidiosis and Marek’s disease.

Both of these diseases have a preventative vaccine available so if you are ordering chickens from a hatchery it is well worth the minor expense.

The average chicken can live anywhere from 3 to 8 years.

Chickens that are well protected from the usual dangers of being a prey animal and other such problems will live much longer lives than they used to. The oldest chicken ever recorded was over 20 years old when she died.

Ensuring your coop and run is safe for your birds will help them to live a long and productive life.

Disease and infection can be problematic especially if the chickens have been on the same ground for a few years.

The build-up of parasites and bacteria can cause many problems from worms to coccidiosis.

It is also worth noting that many of today’s breeds are bred specifically for high egg production.

These breeds tend to die after a couple of years or so because the high rate of production is not healthy for the longevity of the bird.

If you keep dual purpose or heritage chickens you can expect them to live 5+ years.

The life of a chicken is a snapshot of a fairly intelligent and hard-working creature.

These creatures have a structured hierarchy, great memories, are able to learn and give much pleasure to humans.

Chickens of today live much longer lives than the barnyard hen used to.

Back then the average hen would live only for a few years and would lay fewer eggs than they do today. They had to survive on a poor diet gathering what they could from the barn and surrounding areas.

The Silkie chicken is loved by many for their unusual appearance and furry feathers. They stand alone in the chicken world as being the only breed to have this furry appearance. She has a long history that runs all the way from the ancient Chinese Read More →

Most of us do not really think much about the humble egg. It is just another nutritious grocery store item that we either purchase from the store, or collect from our lovely backyard hens. Unfortunately though, not much thought goes into what happens inside a Read More →

Dealing with an egg bound chicken can be traumatic for all involved if you do not know what to do about it. The good news is that egg bound chickens are not at all that common. However some hens will suffer from this during their Read More →