The mention of Marek’s disease is enough to strike dread in every flock keeper.

Because Marek’s disease is so widespread all flocks are considered to be infected until proven otherwise.

Much has been written about this disease, some factual, some empiric and some poorly researched pieces too.

In this article we want to set the record straight.

We will discuss everything you need to know about Marek’s including symptoms, treatment, prevention and much more… 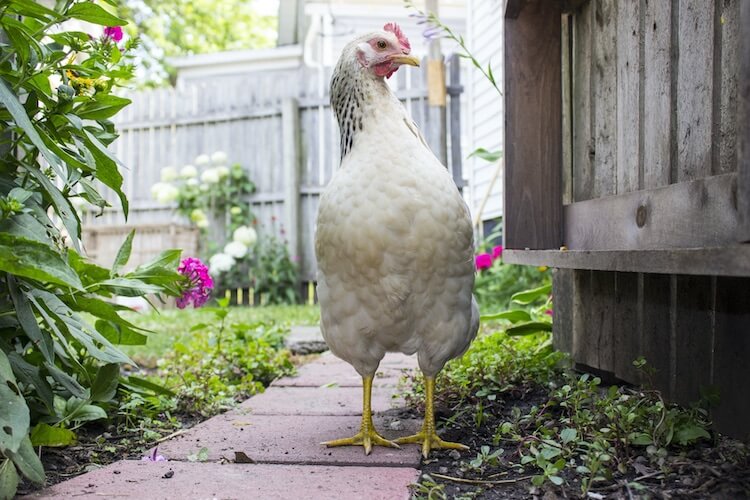 What Is Marek’s Disease In Chickens

Marek’s disease is often described as a virally induced cancer.

It is caused by a virus and there is no known cure for the disease. While some birds survive the vast majority sadly succumb to the disease.

Marek’s disease was first studied and named back in the early 1900s by a Hungarian veterinarian by the name of Jozsef Marek.

He found that the disease itself attacks and weakens the immune system of the chicken and that many chickens actually die from a secondary infection. It is considered to be primarily a disease that attacks younger chickens as they are more susceptible than older chickens.

Sadly Marek’s can also be found in quail, pheasants and turkeys.

Marek’s disease is caused by a virus.

When Dr. Marek first wrote about the disease it is likely that there were only one or two strains but over the years the virus has mutated and there are now six known mutations.

These mutations can vary between benign or highly pathogenic (causing disease and/or death).

How Does Marek’s Spread?

Chickens will initially get infected via their respiratory system.

Marek’s disease travels from chicken to chicken in dust and dander that is contaminated by infected chickens.

The feathers and dander are pecked at by other chickens and the disease is inhaled into their lungs. Then the CD4+ T cells will distribute the infection throughout their body.

It is thought that the wind can blow dander and infected materials up to three miles from the original source. Marek’s can also travel to your flock on infected boots and clothing. It can live in the soil for years and can remain viable in coops, barns and buildings for up to 65 weeks in ideal conditions.

The good news is that vertical transmission (from mama to the egg) is not considered to be a viable source of transmission at the current time.

Does My Flock Have Marek’s Disease (Symptoms)

Chickens with Marek’s can start to show symptoms as early as six weeks old and up to around twenty weeks.

There are four different presentations of Marek’s disease so symptoms can vary widely.

The four types are:

Neurological: The neurological type is known as the classic Marek’s. Here the virus attacks the nervous system and causes swelling and inflammation of the nerves and pathways. This can lead to multiple nervous impairments such as torticollis, tics and paralysis. Symptoms include weakness, pale comb, decreased appetite, diarrhea, respiratory problems, problems walking, and generally looking unwell. This type has a high mortality rate but birds can survive but will likely have some issues with walking and balancing.

Visceral: This type of Marek’s will cause internal tumors. These tumors can be widespread and may involve heart, lungs, liver, spleen, and other major organs. The symptoms are usually poor appetite, weight loss, diarrhea, weakness, depression and looking unwell. Often these chickens will be found dead with no apparent cause. As you would imagine this form has a high mortality rate.

Cutaneous: This form of the disease infects the feather follicles and causes them to enlarge, redden and occasionally form crusty brown scabs or ulcers. The virus lives in the follicles and although the bird may exhibit no signs of infection it is shedding infected cells and dander.

Ocular: This type attacks the chicken’s eye and will cause the iris’ color and shape to change. It can lead to blindness, however chickens with ocular Marek’s can live for several years.

If your chicks do get Marek’s disease then your care is going to be supportive as there is no known cure.

Certain chickens may be strong enough to overcome it but they will be lifelong carriers of the disease.

You should feed your chicks an enhanced mash which will help them maintain weight and hopefully gain strength.

Feed them 20% chick starter mixed with electrolyte/vitamin enhanced water to form an oatmeal consistency. This is easier for them to swallow and digest. Dependent upon their age they may need to be fed several times a day.

They should be isolated away from the rest of the flock to protect the flock from possible contamination.

It also will help those chicks that cannot move well as they often get trampled to death by their flock-mates.

Keep them clean and warm.

You can use a coop heater to keep them warm but not overheated. Check on them to see if they are panting or shivering and adjust the heat accordingly.

Those that have some paralysis will need to be cleaned up several times a day to prevent fly strike.

Many chicks will eventually succumb to this disease so you need to seriously think about quality of life issues and be prepared to prevent further suffering. It is a hard decision to make but if your hen is suffering it is something you need to consider.

How To Prevent Marek’s Disease

The best way to prevent Marek’s disease revolves around vaccinations and good biosecurity.

A vaccine is available at most hatcheries and you can request that your chicks are vaccinated. This is done when they are one day old or in ovo at Day 18. In ovo is the best way as it takes between 12-16 weeks for your chicks to get immunity.

If the chicks you get are not vaccinated you can vaccinate them at home. The only vaccine available for home use is the oldest and possibly least effective vaccine available, but it is better than nothing. You should talk with your local veterinarian to see if they will order some for you.

Unfortunately the vaccine is not 100% effective, it offers protection against some of the mutations but not all of them. Chickens can still get the virus but in a much less severe form.

It is important to note that while vaccinated birds may not get sick, they can still be carriers of the disease and infect other chickens.

Here are a few biosecurity tips:

Once you have implemented these biosecurity tips there are a few more things you can do to prevent this terrible disease.

You should make sure your coop has good ventilation. This will let a good amount of air flow throughout the coop and helps to control respiratory illnesses in general.

Also always try to get your chicks vaccinated at source.

If you are buying locally or from a friend then make sure to find out about the flock. Does the place look clean and cared for? If in doubt you should walk away because once you have Marek’s there is no going back.

Finally you could consider an all in all out policy. This means all new birds come in at the same time and leave at the same time. Most commercial enterprises adopt this policy however most backyard flock keepers dislike this method of chicken raising as we cannot resist new chicks!

The best ways to keep you flock healthy are really quite simple and easy to do.

First of all, nutrition. You should feed your flock what they need. Do not try to save a few pennies on sub-standard feed. Laying chickens should be fed a high quality 16% protein feed. And chicks should be fed a 20% starter feed.

The next thing they need is space. You should make sure not to crowd them. Tight living conditions lead to stress in the flock so make sure they have enough space and things to keep them occupied if they are kept in a run.

Your chickens will also need fresh air. Letting them range outside will give them physical and mental benefits. Most chickens enjoy free ranging and they will pick up some tasty snacks from the yard, scratch in the dirt and maybe even have a dust bath. All of these things are natural behaviors and should be encouraged.

The fourth thing they need is cleanliness. You should keep the coop clean – chickens should not be standing around foot deep in poop and dander.

Finally you should always keep a watchful eye on your chickens. At this time of year in the northern hemisphere they look miserable because they are molting. If you have more than one bird that appears sick you should isolate until the cause becomes apparent. You can use a chicken crate to isolate them.

Marek’s Disease is a horrible and depressing thing to experience in your flock and I sincerely hope it never happens to you and your flock.

The good news is that it is fairly rare for backyard flock keepers to encounter this providing you have vaccinated your flock and follow sensible biosecurity rules.

Also even with chickens that have Marek’s, with some adjustments to your flock management you can keep an infected flock in your yard for as long as they live. Those with a non-virulent form of Marek’s can live a long and relatively healthy life.

There is ongoing research into this so there is hope on the horizon for an eventual cure or treatment.

As a reminder though, once your flock has Marek’s it will never be free of it until the last chicken has died.

Some unscrupulous folks will try to sell chickens that they know are infected and this is morally and ethically the wrong thing to do. It means that another flock will be infected with this terrible disease. Do not be afraid to ask questions about the deal, it is better to turn down the offer than have your flock infected.

The Complete Guide To Chickens And Water

Water is a natural resource that we use daily. Just like humans, your chickens need water too. They need it to help regulate their temperature, for egg laying and much more. We rarely think about water yet it is vital to productivity and life in Read More →

The Muscovy duck is very different from other ducks. Although they are a waterfowl they prefer to spend their time roosting up in trees that are far away from predators. On a homestead the Muscovy has much to offer: eggs and great pest control. They Read More →

Choosing the right chicken waterer for your flock can save you a lot of time and work. The ideal waterer will keep the water clean and fresh. It should not leak and should be easy to clean and refill. Buying the best you can afford Read More →