The Muscovy duck is very different from other ducks.

Although they are a waterfowl they prefer to spend their time roosting up in trees that are far away from predators.

On a homestead the Muscovy has much to offer, including eggs and great pest control. They are low maintenance, quiet and fit in very well with chickens and other fowl.

You can even keep them if you do not have a pond or stream nearby. Muscovies will be happy with a small paddling pool as their water source.

Keep reading to learn more about this unique duck… 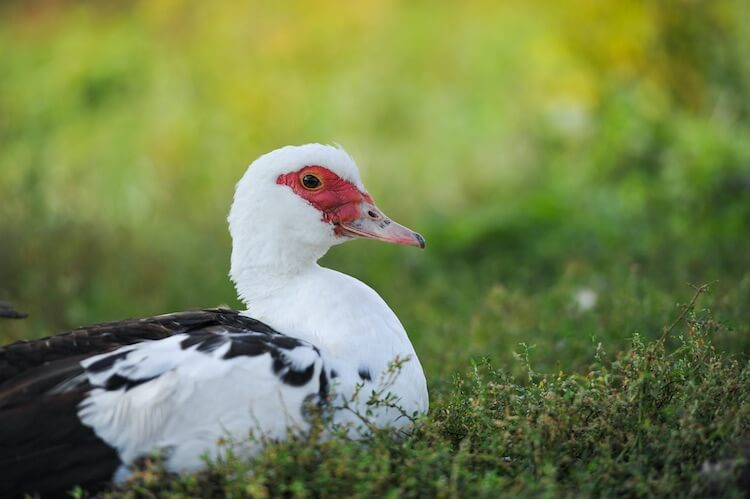 The Muscovy duck (Cairina moschata) is not your average barnyard duck.

To start with they are quiet!

Although the Muscovy is a duck, they are one of the few species not related to the prolific Mallard family of ducks. They are a seperate species and are known as wood ducks.

Living up to their nickname as a tree rooster they often nest high up in trees to avoid predators. They prefer to nest in high areas and will be very unlikely to nest on the ground as most other ducks do.

You can expect them to lay around 200 eggs per year.

Duck eggs are prized for baking and they are nutritionally superior to chicken eggs!

Muscovies also excel at pest control and are very helpful to have around stables to keep down flies and ticks.

Overall this is a friendly and unusual duck that does enjoy human company. They will wag their tails and bob their heads when happy. 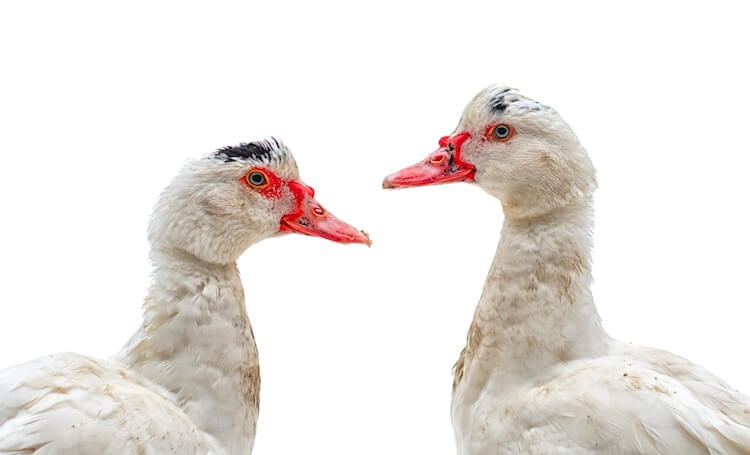 The Muscovy is a big duck.

Males can be around 30 inches in length, and the females are usually about half that length.

A wild Muscovy is mostly iridescent black with white wing patches. The domestic variety can be a variety of colors from black through to an all-white appearance.

They have a sturdy and solid-looking body with a long neck. Their tail is long and flat.

Another name for the Muscovy is the greater wood duck. In the wild, the Muscovy will live and perch in trees for safety. Their black webbed feet have strong sharp claws that are built for gripping branches.

Their head has a long sloping bill which has a red or black knob at the base. The bill itself can be pink, black, yellow or a combination of some or all colors.

Each Muscovy Duck will have a face mask.

This face mask is actually called caruncles. It looks like knobby and wart-like growths.

These caruncles start growing when they are adolescents and will slowly grow throughout their life. The caruncles are bigger and redder on the males. They contain oil glands which secrete the oil used to preen feathers and keep them waterproof.

The female Muscovy will reach around 6.6lbs once fully grown.

Males on the other hand will reach around 12lbs but some can weigh up to 18lbs.

They are a long duck with males reaching about 30 inches in length and females about half that size. The Muscovy wingspan can be an impressive five feet from tip to tip.

The wild variety of the Muscovy is a more solid glossy black with white wing patches.

Domesticated Muscovies are more evenly black and white. You can even find them in pied, bronze, chocolate, blue, black, all-white and a lavender color.

What Is It Like To Own A Muscovy Duck? 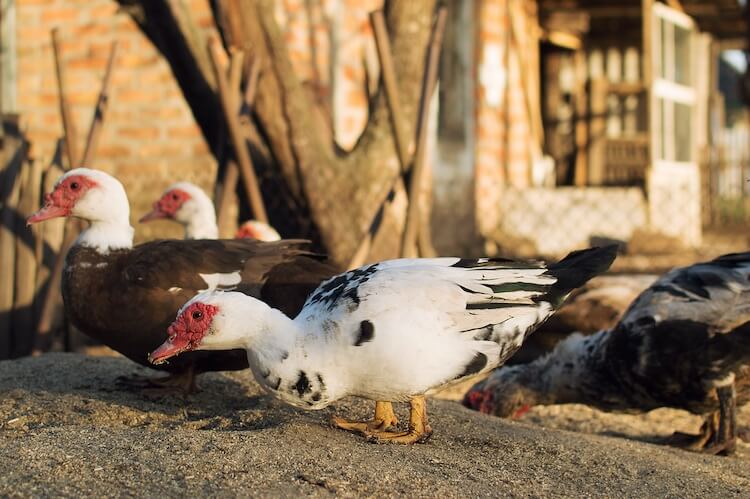 Although they do not quack, they will often wag their tails and bob their heads when they are excited to see you.

The noises they make are more hisses and huffs but do not think they are hissing out of fear or anger; it is simply the way they express themselves. Listening to a bunch of Muscovies chatting is interesting.

Females are generally calm but the drakes can be a bit of a handful at breeding times. They may fight each other for access to the hens. While they will mate with one hen for a season, they will not necessarily be faithful and will try to mate with other females.

The females are good flyers and will often take off for other areas so you may want to keep their wings clipped. The drakes however are a bit too heavy to fly well or far!

They do not like to be handled but they will become used to touching and petting if you train them as ducklings.

The Muscovy Duck can lay up to 190 cream-colored eggs each year.

These eggs can be anywhere from 1-2½ inches long and can weigh up to 2.7oz.

Muscovies like to brood in the summer months and will often gather up to 16 eggs to incubate. Some females have been known to brood together or even with chickens as co-nesters. They seem to enjoy the company and are quite happy about the arrangement.

It takes 30-35 days to incubate the eggs and Muscovy Ducks make great moms!

The ducklings are yellow with brownish markings when they are hatched and they will stay with mom for 10-12 weeks until they can regulate their temperatures well enough on their own. 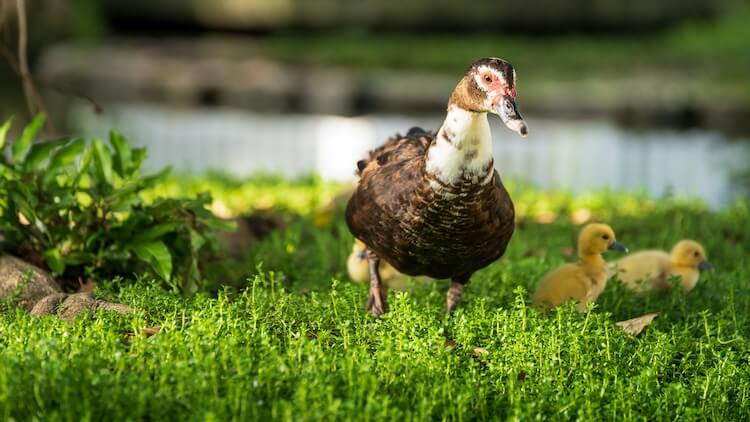 The Muscovy is a relatively quiet duck.

They hiss and talk but the level of noise is usually low. If you get a group of them together they will talk quite animatedly but at a much quieter volume then other ducks.

In general the Muscovy is a healthy and robust duck.

The only health concern for this duck was found during a study done in Colombia. They found that the Muscovy was more commonly infected with both Haemoproteus and Plasmodium parasites (both of which are endemic to tropical areas), but neither parasite is zoonotic so there is no danger to humans.

Otherwise they are subject to the usual pests including lice and worms. These can be controlled with medications.

Something of concern for all ducks is the possibility of duck plague (duck viral enteritis or DVE) which is caused by a virus. There is a vaccine available in the US so where possible this should be given. 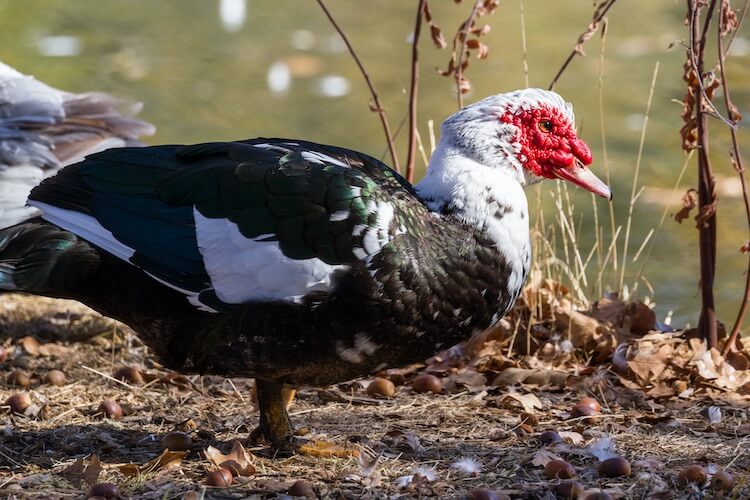 The Muscovy Duck is an omnivore which means they eat plants and other animals.

As ducklings they can be fed an all flock feed with added brewer’s yeast. They will also eat grass, grains and corn. As they get older they will start to eat bugs, slugs, insects, and crustaceans just as the adults do.

Adult Muscovies can be fed an all-flock feed which they will supplement with tidbits they have hunted from the yard and garden.

They are an excellent form of pest control and will remove slugs, snails and flies! In tropical areas they will attack termite hills and eat the termites too.

You can give them extra greens in the form of chopped lettuce, cut grass (pesticide free), chopped fresh veggies and corn. If you have a pond they will dabble and eat some of the plants and roots.

Unlike other ducks, the Muscovy actually prefers to perch so you will need sturdy roosts in the coop!

They seem to get along well with chickens and do not mind sharing the coop with them.

Because they instinctively nest in high places you can use large chicken style nesting boxes.

How big is a Muscovy nesting box?

The ideal dimensions would be a box two feet high and 18 inches wide and deep. If you have more than one Muscovy hen you might want to leave the box open at the top so they can share the space as they enjoy co-nesting. Read 9 Things To Know Before Keeping Ducks As Pets for more.

As for outside of the coop, Muscovies enjoy free ranging.

They will eat pests such as flies and ticks and are often released into pastures after the livestock to remove flies and maggots. They also like to dabble at the edges of ponds and streams for tasty crustaceans, plant roots, larvae and any other little goodies they can find.

You can expect them to eat grass too!

They are all-around great at removing grains and seeds.

This duck will tolerate confinement but they do much better if allowed to graze outside the pen.

If you must keep them in a run then they will need a good deal of room. Aim to give them each at least 15 square feet each and a wading pool for them to use as a water source. 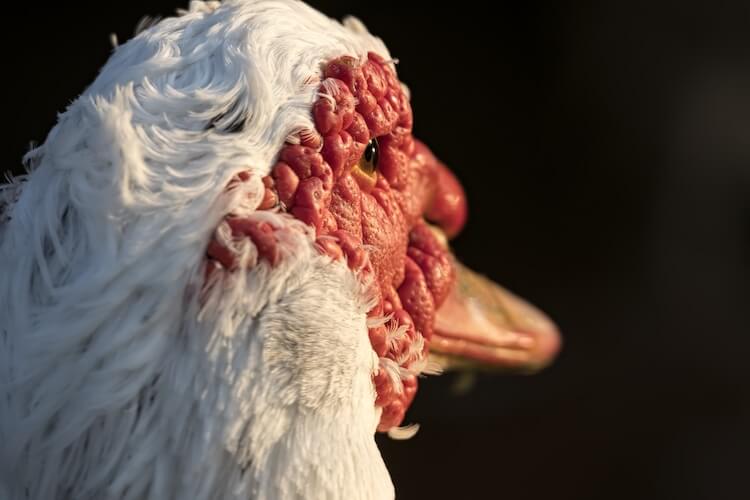 The Muscovy Duck has a long and interesting history.

They are actually one of the oldest species to have been domesticated by humans.

Native Indians of South America were keeping these ducks when the Spanish arrived in the New World in 1492. The Aztec rulers had cloaks made from Muscovy feathers and the Muscovy duck was the totem animal of their wind god (Ehecatl).

The Spanish called the wild Muscovy pato real and the domestic version pato criollo or pato mudo. Christopher Columbus sent some of these ducks back to Spain where they became established and were used for culinary purposes as well as feathers.

How this duck came by the name Muscovy is unclear though.

It may have been a corruption of one of the South American tribal names or it could have come from the shipping company that transported them back to England and France (the Muscovite Company).

Since then the Muscovy has gone on to establish feral colonies all over the world and is farmed as a domestic duck in numerous countries around the world.

They are now firmly established as a barnyard favorite and make productive members of lots of homesteads throughout the US.

Although the Muscovy Duck is native to Mexico and South America, they can be found worldwide.

There are several feral colonies in various parts of the world as well as the domestic population. It is considered an invasive pest species in some areas because of the damage they can cause to the ground with their clawed feet and possible destruction of native species of beetles and invertebrates.

Not only do they look different from most ducks, they are different.

This duck is genetically different from the Mallard duck which is the ancestor of the majority of our duck breeds.

Although they are slow to mature they do make wonderful pest controllers and egg layers.

All of these things make them a great breed for a beginner to work with.

Automatic chicken feeders sound wonderful. They can certainly make life a bit easier with the day to day chores of feeding and watering your flock and will save you a little time here and there. There are a few different types available so today we Read More →

Are you looking to add a beautiful Cuckoo Marans to your flock? Finding a good hatchery that sells this exact color variety can be difficult. Because this breed is rather rare, most people won’t be able to find a local seller. This is when you Read More →