The Plymouth Rock is an old and trusted chicken breed.

She is one of the first breeds created in America and holds a special place in the hearts of poultry enthusiasts all over the world.

These days they are considered wonderful chickens for families as they are calm, docile and friendly with their keepers.

In addition they are well suited to urban backyards as they are not particularly noisy and do not fly well. 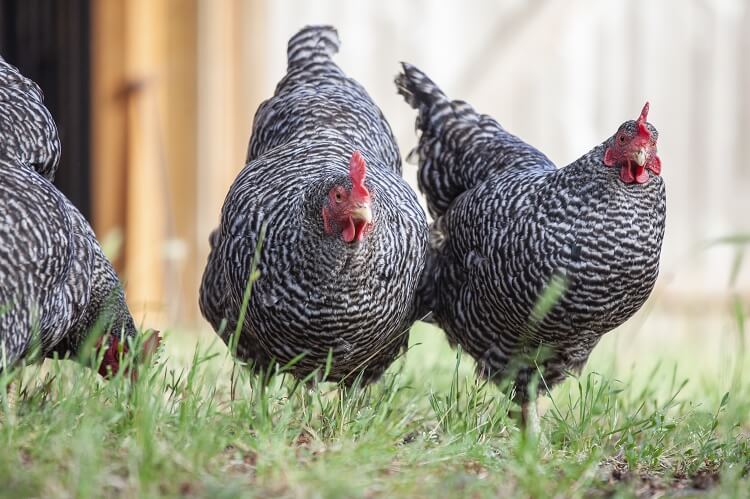 The Plymouth Rock is one of America’s oldest and most respected chicken breeds.

This breed has a substantial following and during the second World War Plymouth Rock hens were seen from coast to coast in the US. During this time the Government encouraged folks to raise their own food and the Plymouth Rock was the go to chicken that occupied houses, coops and sheds.

She was only rivalled by the Rhode Island Red in later years.

The Rock is a calm, friendly and relatively quiet chicken that is more than capable of laying 4-5 eggs every week.

They are trusting and with enough time and practice can become a lap chicken if you so desire.

In recent years this breed has been rediscovered as one of the perfect hens for backyards – she will certainly make a delightful addition to any flock! 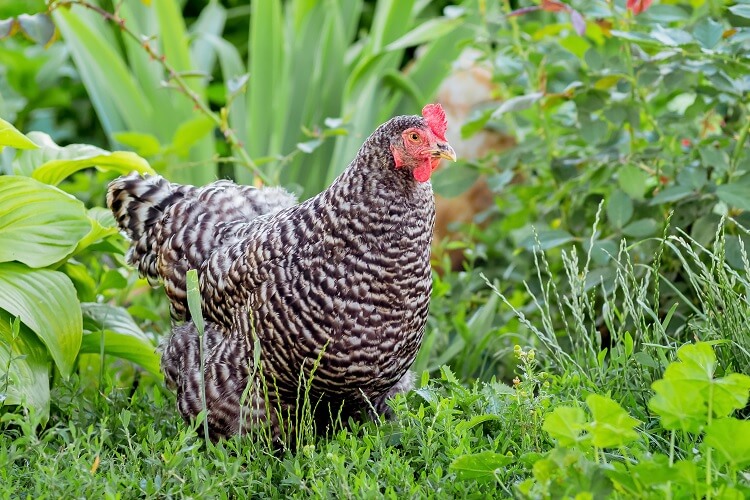 The Plymouth Rock is a large bodied bird that has an almost triangular side profile – their back is long while the breast is full and rounded.

They will have an upright single comb with five points.

Comb, wattles and ear lobes are all red.

The beak is a yellowish horn color and their eyes are a reddish bay.

Their feathering is full and loose and it is especially soft on the underbelly of the bird.

The barring of the feathers should be distinctly defined.

If you have ever seen a Dominique then you could be forgiven for confusing them as a Plymouth Rock. These two breeds are often confused with each other.

However there are some differences:

It can be hard to tell for beginners but if you ever see the two birds side by side you will see the differences quite clearly.

This is a large and solid chicken, like Cochins.

In the US there are seven recognized varieties of the Plymouth Rock chicken.

White and blue are popular colors however it is the barred varieties which are by far the most popular.

Other recognized varieties include: colombian, partridge, buff and silver penciled.

What Is It Like To Own A Plymouth Rock?

They enjoy free ranging in the yard.

Her black and white feathering does a pretty good job of camouflaging her from predators.

She is a docile hen that will happily get along with other flock members and will rarely cause any problems.

They are good foragers and enjoy being outside in the grass although they can tolerate confinement.

This is is a calm and friendly hen.

You will not find a mean bone in their little bodies. They seem to get along with all flock mates and will usually stay away from upset and disputes.

They are usually near the middle of the pecking order of the flock.

Rooster too are quite gentle although it would be unwise to let small children near a rooster until you are certain of his temperament.

As for humans they can be incredibly friendly once they get to know you.

They are good with children and will tolerate being handled and carried around.

This breed is very curious and will follow you around the yard if they think it might bring them a treat. Rocks will love to garden and snatch up bugs and worms as fast as they appear.

They are very trusting birds once they get to know you and are very good with children.

She is a good and dependable egg layer.

This is one of the reasons why they have maintained their popularity with so many people.

Plymouth Rock hens come into lay at around 20 weeks old and will go on to produce 4-5 brown eggs each week.

They are lovely large eggs!

As a heritage breed you can expect your hen to continue to lay for 2-3 years and continue past there.

In many cases they will lay beyond the 3rd year but the eggs will be fewer over time.

In general the Plymouth Rock is a quiet bird.

They can be heard murmuring among themselves but they are not know for noisy outbursts or fits of nervous energy.

This overall quietness makes them ideal for the backyard as they are unlikely to disturb the neighbors too much as long as they are far enough from the fence lines. 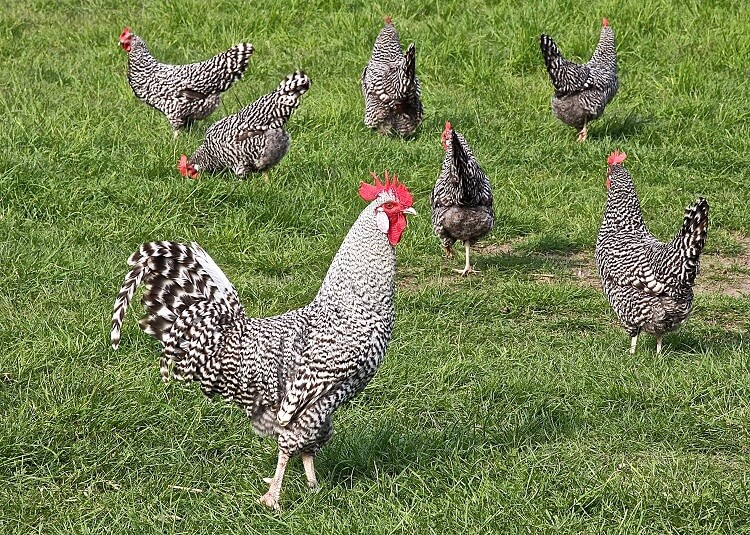 This breed comes from strong and healthy stock.

They are well suited to a variety of climates and are usually very healthy. However the usual array of internal and external parasites persists so treatment on a regular basis will help.

Also roosters have large combs so care needs to be taken during winter. In areas where there is frost and very cold weather he can benefit from a layer of petroleum jelly being applied to his comb.

This breed can be fed a standard 16% protein layer feed.

During their molt you can consider increasing the protein content to 18-20% to help the flock feather up a bit quicker.

You should always supply a separate source of calcium for the ladies to eat if they wish.

Calcium in the form of oyster shell is fairly inexpensive and will last a long time.

A separate container of insoluble grit should also be available as they need this to grind up their food.

Plymouth Rocks are large chickens and need at least 4 square feet of coop space each.

Although they are not aggressive by nature living in cramped quarters can lead to anti-social activities such as feather picking.

For roosting space the standard 8-10 inch roost will be enough. Try to ensure a little more room if you can as during the hotter months they will like to spread out a bit but in winter you will find them all snuggled up together to stay warm.

As for nesting boxes a 12×12 inch box will fit them very nicely.

One nesting box for every three or four hens will be enough however they will always have a favorite box that everyone wants to use!

They are good little foragers and will remove lots of bugs from your yard.

If you have a garden you will want to fence it off from these chickens as they will happily sample everything including your flowers or vegetables.

They do tolerate confinement so can be kept in a run if free ranging is not possible.

Make sure they each have at least 8 square feet of run space and plenty of space to keep them interested. Perches at differing heights, tree stumps and pile of leaves will all help to keep them busy and engaged. 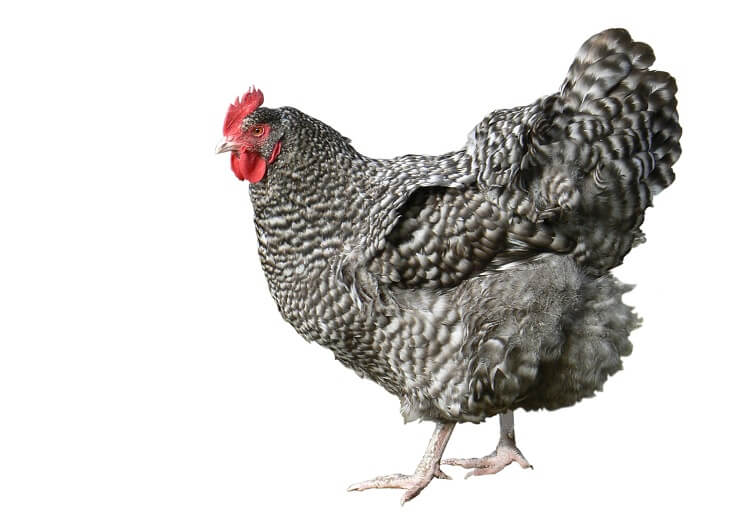 The Plymouth Rock is one of America’s oldest breeds.

They first made an appearance in 1849 however nothing more can be discovered until 1869 when a Mr. Upham from Massachusetts began breeding some barred roosters with Java hens.

His goal was to produce a barred chicken that had no feathers on their legs.

In the beginning both the older Dominique breed and the Barred Rock looked very similar (almost identical). Each breed could have a rose comb or a single upright comb.

This led to some unscrupulous people exhibiting Dominiques in Barred Rock shows.

As a result the New York Poultry Society felt that the situation needed a remedy so after 1870 the standard was set for the Dominique to have a rose comb.

All other barred chickens were to be known as Plymouth Rocks.

Since then they became almost a household fixture and during the Second World War keeping chickens was actively encouraged by the Government.

This provided a family with eggs and of course meat which are both a great sources of protein.

Since the rise of the modern industrial hen the popularity of the Rock has fallen away some. The Rock fell away because she could not produce enough eggs or grow quickly enough to produce a decent sized meat bird.

So for many years the breed languished.

However these days she has found new popularity among small homesteads and backyard chicken keepers.

Interestingly she is an auto-sexing breed – this means you can identify their gender almost as soon as they have hatched.

The first three on the list can be seen once the chick is dry and the other characteristics will develop over the next few days and weeks.

The Plymouth Rock hen is an all American chicken dating back to the 1800s.

She has a long and notable history behind her and has become one of the most popular breeds around.

While she may not be as prolific as some of the modern day industrial hens she will keep you nicely supplied with eggs.

They are content to roam around finding bugs and such or they can be penned with limited access to free ranging.

Whilst they are several color varieties of the Rock in most folks mind the Plymouth Rock will be a black and white barred chicken.

Are you still considering raising this beautiful family chicken? Let us know in the comments section below…

Imagine your chickens in their coop during the wintertime. The snow is falling outside and the wind is throwing leaves off the nearby trees. Your chickens are huddled together and shivering. Maybe it is time to consider a chicken coop heater? These heaters are used Read More →

The Ayam Cemani is an unusual chicken to say the least. They have been called the Devil’s chicken because of their all black coloration. In their homeland they are revered because it is thought they have magical powers! Cemanis remained virtually unknown to the west Read More →