The Polish chicken is a magnificent sight to behold.

Their head feathers are a head turner and a fashion statement for sure – once you see on these lovely birds they certainly leave an impression on you.

Although they were once considered a good egg layer they are now more commonly kept for show and exhibition purposes.

Her gentle disposition means they are good for children as they are quiet, friendly and do not mind being held or cuddled.

Keep reading to learn more about these top hat chickens… 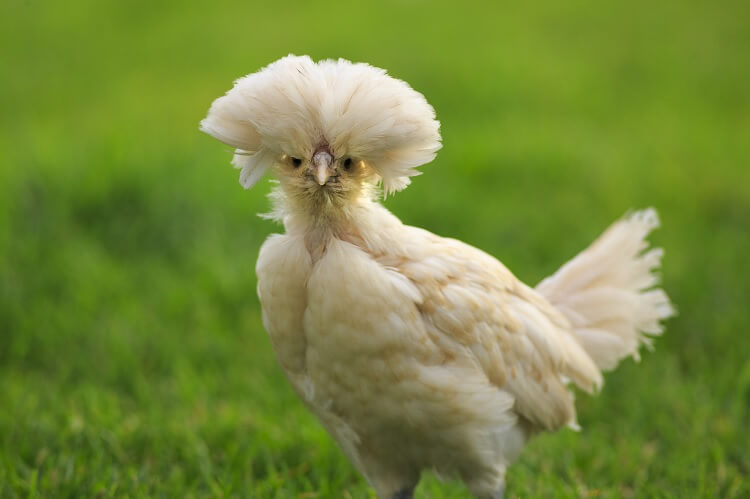 The Polish Chicken is an old and noble breed from the 15th century.

They come from the Netherlands and have been portrayed in a few pastoral paintings from that time.

These days they are mainly kept as ornamental or show birds but at the height of their success they were considered fine egg layers putting out a respectable number of eggs each week.

As show birds they require a good deal of prepping before the show to get their head feathers looking neat and tidy. Breeders spend a considerable amount of time making sure their chickens look the best.

However out on the yard they make a great family chicken.

She is kid friendly, docile and pretty quiet.

This makes for a low maintenance breed that is suitable for beginners.

You can find them in both standard and bantam size. Bantams rarely weigh more than a couple of pounds which makes them very economical to feed. 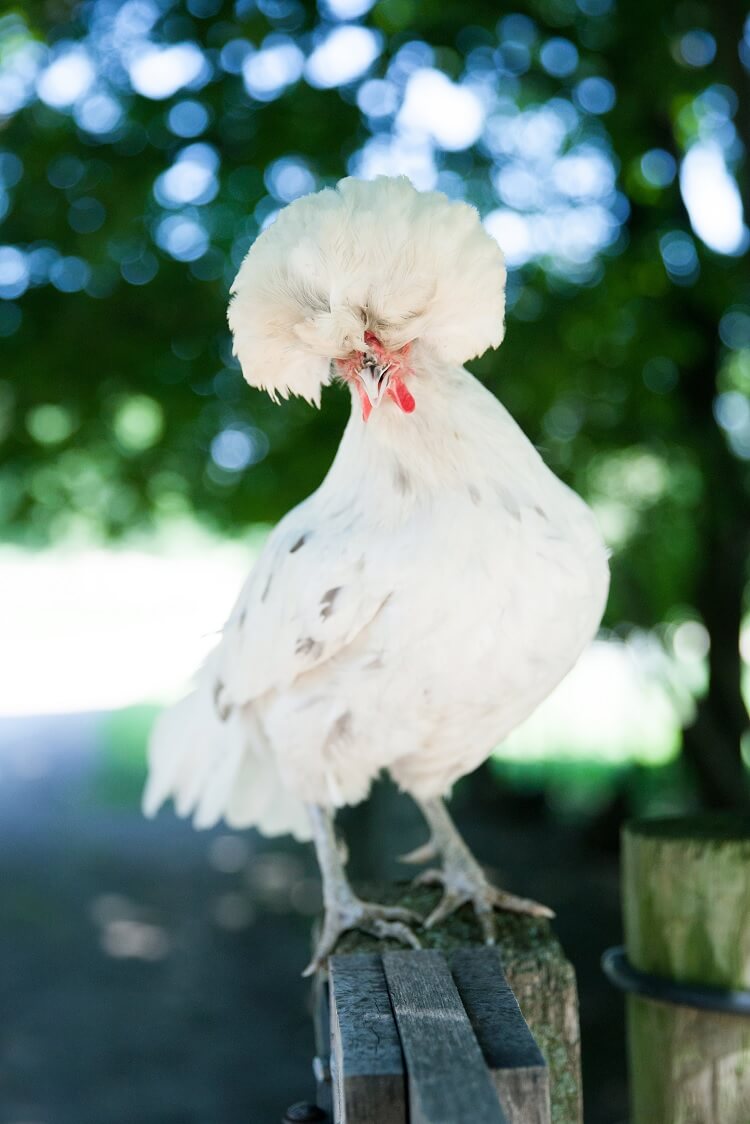 They are very distinguishable by their head feathers. These feathers can vary from a tidy pom-pom to an untidy and wild in nature appearance.

These feathers can often impinge on the vision of the bird.

They also hide the V-shaped comb of the rooster.

Overall they are a medium sized chicken that has a graceful and upright carriage. The body is fairly long with a straight back and broad shoulders. Wings are held close to the body and are moderately long.

Polish have red comb and wattles with white ear lobes.

They will have a large horn colored beak and red bay color eyes.

As for their legs they are yellow and wide set. Each leg has 4 toes and there should be no feathering on the legs.

Polish roosters usually look like they are having a bad hair day – their head feathers are spiky and untidy whereas the hens tend to have a neat pom pom appearance.

Also he will have pointed sickle feathers in his tail and hackles.

The Polish chicken is considered a standard chicken that is on the smaller side.

There are bantam varieties too – they weigh up to 1.8lb depending on the sex.

There are many different colors of polish Chickens available but only 10 colors are recognized by the American Poultry Association.

The most popular of these are:

One of the most popular non-approved colors is the Tolbunt (they are black, white and brown).
As mentioned there are several more varieties too that are works in progress.

What Is It Like To Own A Polish Chicken? 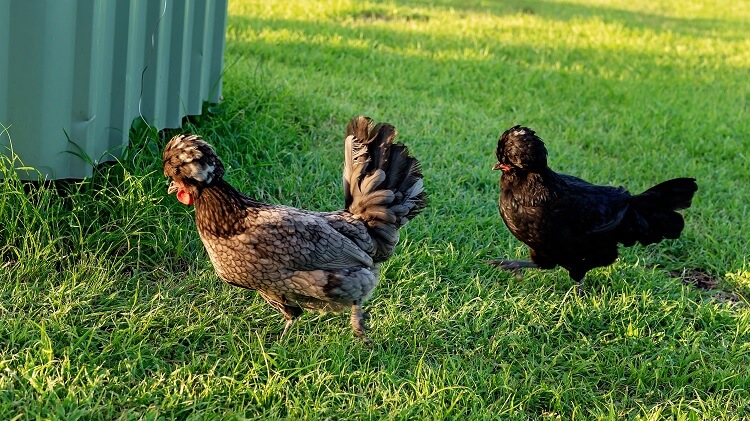 This is an active breed that makes a good forager when they are allowed to free range.

They can fly very well and have been known to fly up into trees for safety when something startles them.

If you have a mixed flock then think carefully about the breeds you already have. Some of the more assertive breeds can bully the more docile Polish and pluck their head feathers relentlessly until they are bald.

Polish really do better with other docile breeds such as Cochins, Orpingtons and Silkies.

The Polish is a gentle and calm chicken with a good disposition.

You can expect an inquisitive chicken that sometimes lets their curiosity get the better of them.

Some strains can be flighty and nervous but this can be attributed to the head feathers which can often reduce their vision dramatically.

It is recommended that you talk, whistle or sing as you approach a Polish flock so you do not startle them into a panic.

As they are gentle and quiet they are usually towards the lower end of the pecking order. When they are mixed with more assertive breeds (Rhode Island Reds) they can have a rough time being tormented and can lose many of their head feathers from constant plucking.

Ideally they should be kept with other docile and gentle birds. 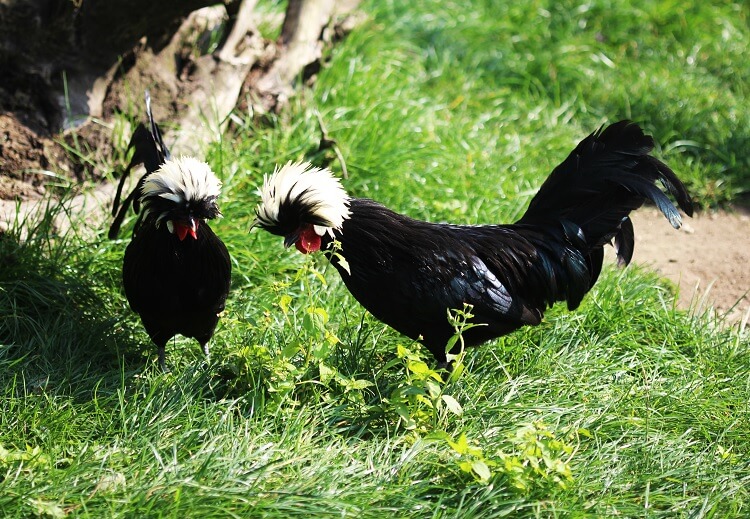 Although they are not considered a good egg layer they do in fact lay a respectable 3-4 eggs per week – so around 200 each year.

However just remember that birds that have been refined for show or exhibition often do not produce that many eggs.

So their exact egg laying capabilities will depend on the strain of chicken you purchase.

You can expect them to start laying any time after 20 weeks and they will produce white eggs.

Overall this is a quiet breed.

Apart from the inevitable rooster crow and the hens’ egg laying song, they are peaceful and chatter to each other in subdued tones.

This quietness makes them good for urban settings (even if you have fairly close neighbors). 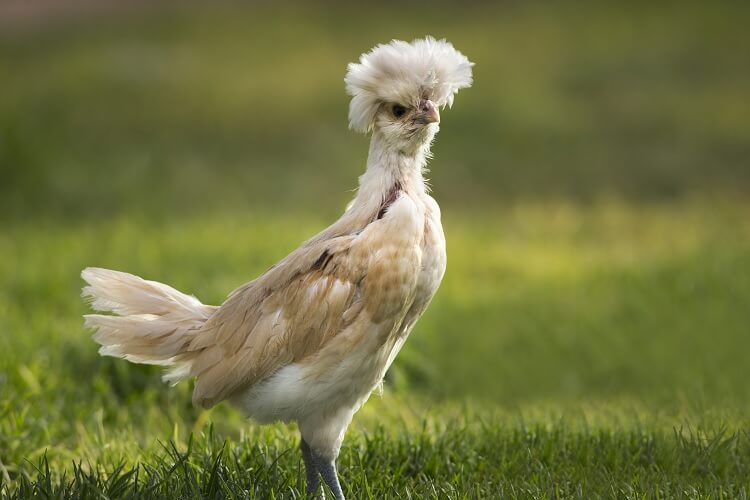 The Polish is not a delicate chicken but care should be taken with their head feathers (especially over the winter months).

Certainly the head feathers should be dried thoroughly if they get soaked by rain or snow. If you are not going to show your chickens then trimming these head feathers away from their eyes will help the bird’s field of vision stay sharp.

Also the usual parasites can be expected – especially if your Polish have beards and muffs.

When the weather turns cold and miserable many keepers move their flocks into warmer draft proof coops.

Other than this special consideration needs to be given to their head ridge:

Polish chicks have a prominent head ridge that does not knit together immediately – so there is a possibility of sudden death from an adult pecking the chick on the head. To be on the safe side it is best to keep these chicks away from birds other than mom for a few weeks until the head ridge becomes more united.

A regular 16% protein feed is for adult Polish chickens during the laying season. You will only need to change this during the molt where you can give them a 20% protein feed until most of their feathers have been replaced.

Free feeding or a set feeding regime is your choice.

I feed all of mine free choice for my convenience. 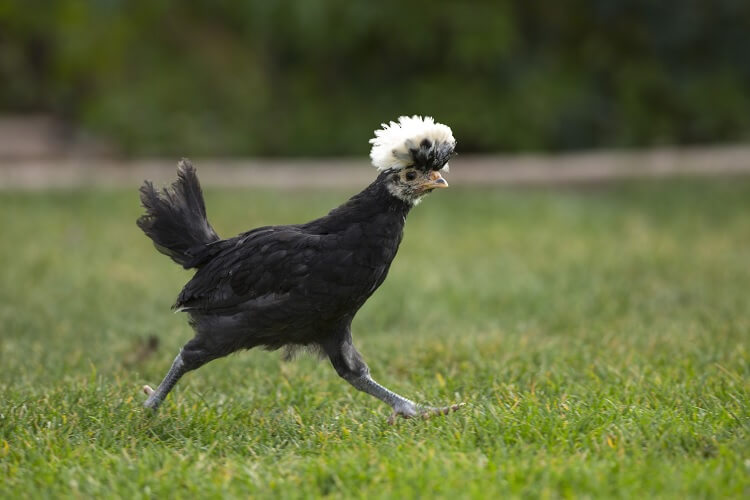 Inside the coop Polish chickens will need at least 4 square feet each.

As always if they have a large area to roam around in outside then you can get away with slightly less coop space.

For roosting space the standard 8 inches is good for these birds. However if you can then give them a bit more room as it will allow them to spread out a bit during the summer heat.

The standard nesting box (12×12 inch) will be adequate for this breed.

A ratio of one nesting box for every three chickens will mean that all your chickens can find a quiet place to lay an egg.

The Polish breed will tolerate confinement very well and in fact it is recommended that you pen them to keep them safe from predators.

Their head feather can impact their sight a lot so Polish are actually a bit safer if you can confine them.

As they are curious chickens make sure to give them plenty of things to do and investigate to prevent boredom. Lots of perches, dust baths and quiet areas for the more timid flock members to escape to is advised.

Curiosity often gets the better of them so they should be kept in a safe run.

You should aim to give them each at least 8 square feet of run space.

They do not mind being confined to a run area as long as they have the basic amenities such as food, water, dust baths and some perches. 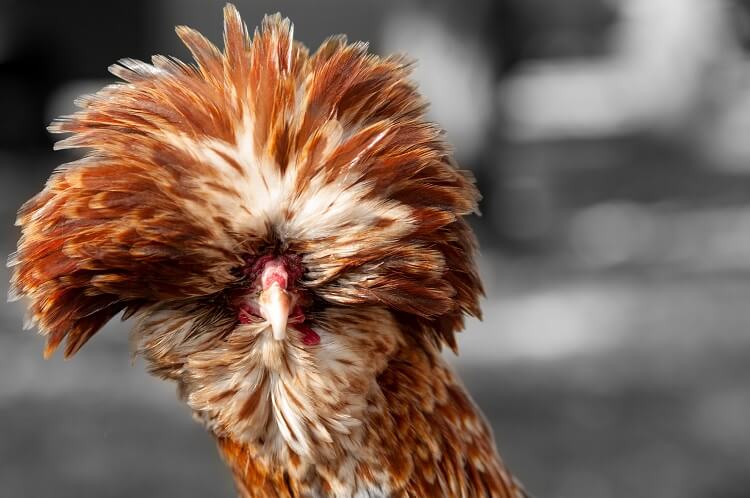 This is without a doubt an ancient breed.

The exact origin of this bird is unknown however the likely place seems to be Holland. There are Dutch paintings from the 15th century that show these chickens as a popular barn fowl.

How they became known by the name Polish is also uncertain – there are two lines of thought on this:

The breed was well known in Europe and was especially loved by the French.

In the 1700s it finally made its way to the UK where it became a success story. Although they were originally imported for their egg laying ability, they were also much favored as exhibition chickens because of their wild head feathers.

The next stage of this breeds journey takes them to America in the mid-1800s.

Again it was imported as a good egg layer and remained one of the best laying breeds until surpassed by the Leghorns and subsequent breeds.

Unfortunately the breed fell in popularity for several decades until its novel appearance put it in the spotlight again. Since the turn of the century they have become a very popular family breed as they are a gentle soul as well as a decent egg layer.

The Polish chicken has enjoyed a resurgence of popularity over the last decade or so.

Many people keep them for the novelty value as the looks of the Polish always gets attention.

Yet others keep them as egg layers.

Whilst they are not as prolific as some other breeds they can still lay a respectable 3-4 eggs each week.

Because of their sweet personality they are great for kids or as a pet chickens and they tolerate being picked up and held. The Polish chicken is certainly visually entertaining and they can lay a decent amount of eggs – so why not give them a try?

The days are getting longer and the nights colder. Before we know it, winter will be here, bringing many challenges with it. One of our least favorite winter hardships is replacing the water for the chickens each time it freezes. Changing out the water multiple Read More →

The 15 Cutest Chicken Breeds: Ranked By Most Adorable

Did you know that there are over 100 different chicken breeds? Some chickens may be feisty, some may be curious, and some are just plain cute! Cute chickens can be small or big, and they tend to have very soft feathers and a fluffy appearance. Read More →