It has been said many times that chickens are a gateway to keeping other types of farm animals!

Ducks are probably the next logical step up from chickens and have become tremendously popular over the last few years.

They are relatively easy to care for and give a great deal of pleasure to kids and adults alike.

Their comical appearance as they waddle along is a blessing on any homestead. 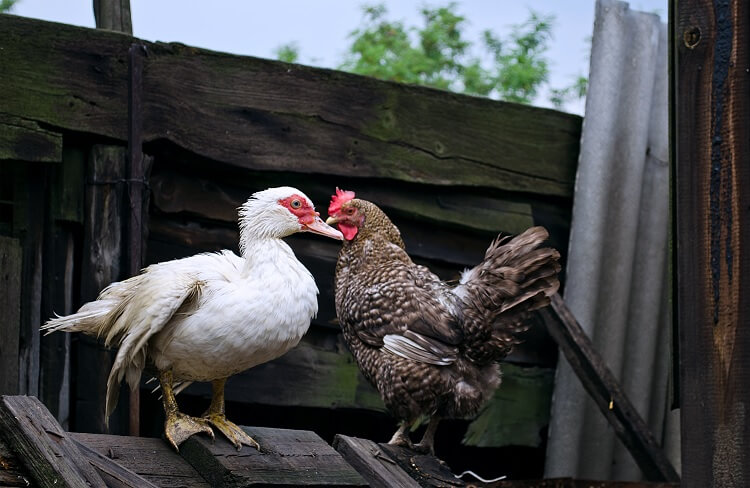 Raising Chickens And Ducks Together 101 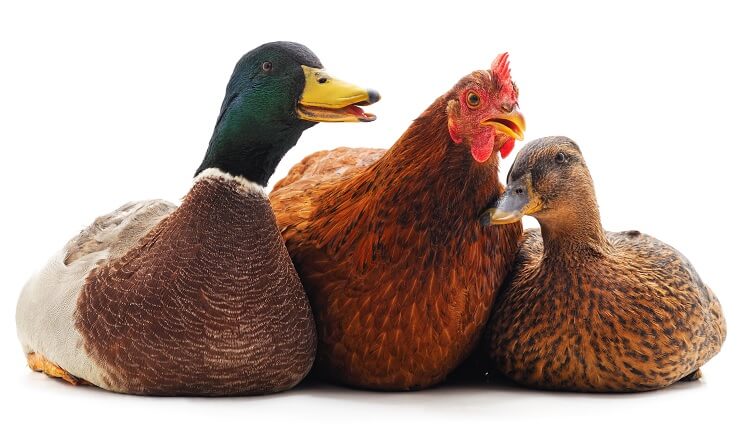 Raising chickens and ducks together can be a good idea.

However there are several things you need to be aware of so you can plan accordingly and have them live together in harmony.

Socially they will intermingle however they prefer to hang around with their own kind. They will nearly always divide into separate groups unless you have a single duck that has been raised by chickens.

You frequently hear of chickens that have incubated duckling eggs and raised them as her own offspring.

This is because ducklings will imprint on the first thing that cares for it, so the ducklings start life thinking they are chickens. As they get older and require a pool to swim in they will slowly draw away from their mother – meanwhile the hen is probably having a fit over her chicks swimming.

Chickens and ducks certainly do have differences in lifestyles and trying to mesh the two together can be a daunting prospect – but it can be done with forethought and planning.

Tips For Raising Ducks With Chickens 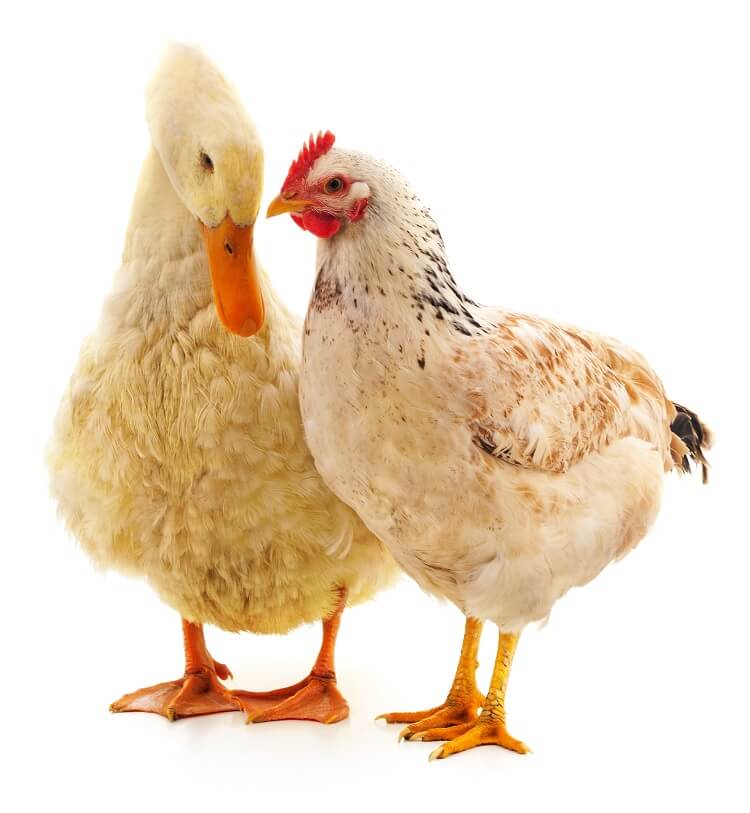 The ideal coop setup for chickens and ducks would look like two separate areas.

So the best solution is to have two separate coops.

If this is not possible then try to partition the coop into the wet and dry sides. That way the ducks can make as much mess as they like while the chickens can remain dry and undisturbed.

On the off chance your run is totally secure with wire under you could allow the ducks to sleep in the pen.

However you must be certain it is completely secure otherwise you will have predators calling on your birds.

Automatic coop doors can be used to let the chickens out in the morning.

If you are keeping your chickens and ducks entirely enclosed then you will need an area for a small pool.

This water is essential to a ducks’ well-being since they use the water to soften up food and clean their bodies.

Adult chickens will stay away from the water however baby chicks are a different matter. If you do have chicks then the pool area will need to be fenced off until they are old enough to know better. 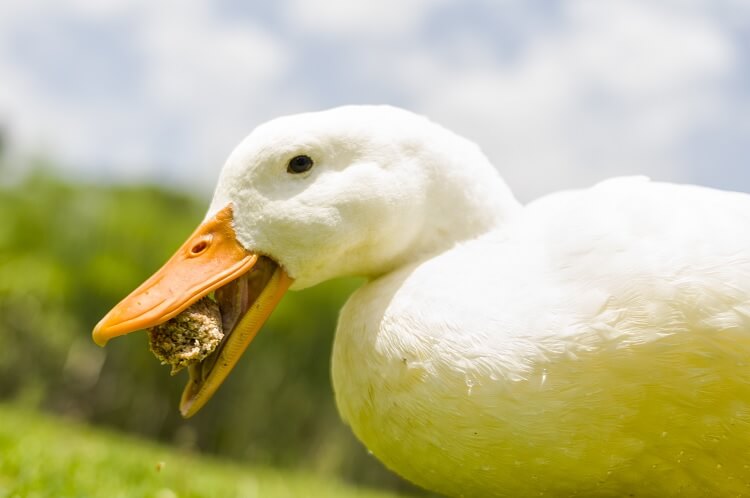 While there are a couple of exceptions you can feed both ducks and chickens regular chicken feed.

Ducks can be fed twice a day or be free fed as they won’t overeat.

Medicated feed is highly toxic to ducklings so they must not eat it.

The second very important thing is that ducklings need niacin.

Niacin is crucial for their development and without it they can develop neurological problems.

Chicken feed does not have enough niacin in it so you should add niacin to it. Crushed Brewer’s yeast powder should be added to the feed at a ratio of 5%. 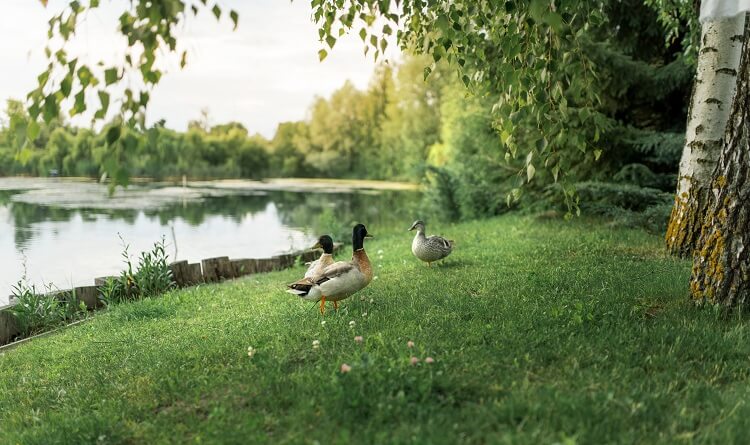 Now we need to talk about feeders.

Ducks are better suited to using a trough feeder so they can scoop up the food. If you do not want to spend money then a large rubber bowl is ideal.

You should try to keep the feed away from the water source.

Ducks love to mix feed and water which will create a filthy waterer. They do not do it to be mucky, they need the water to soften the feed for digestibility. Separating the area a little helps to keep the feed a bit drier and the water a bit cleaner.

However do not completely remove water as it is imperative that ducks have easy access to water with their food as they find dry food hard to swallow.

As far as treats and snacks go ducks love leafy greens, zucchini, peas, corn, veggie peelings, berries, bananas, watermelon and grapes. They also love to eat slugs and do not generally destroy the plants in the process. Ducks also love splashing around in ponds so they help to keep pond vegetation under control too.

Chickens will enjoy most of these as well. 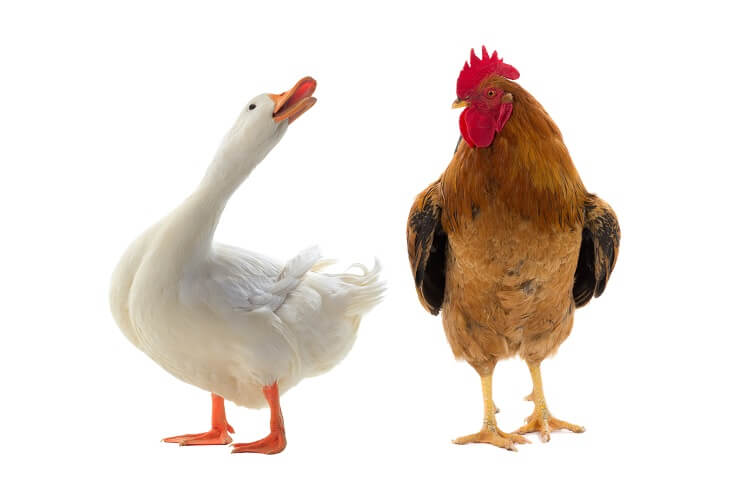 For the most part ducks are healthy and robust birds.

When you are keeping ducks with chickens there are a couple of common health problems:

Impacted crop: Just like chickens, ducks can get an impacted crop from eating the wrong things (bits of string, hardware, elastic bands etc). Treatment is similar to chickens: a massage, water, olive oil and grit.

Botulism: This is common with ducks that swim or eat in water contaminated with dead mammals and stagnant water. If you suspect your duck has this then immediately take them to a vet as this can be fatal.

Wry neck: This is a problem that is usually found in ducklings. It is caused by a vitamin deficiency and can be fatal if not treated.

Bumblefoot: It is caused by bacteria entering a cut or open area on the foot. Antibiotics and wound care will heal the infection.

Eye infections: This can be caused by irritation or injury to the eye. Again antibiotics will help to clear this up.

Respiratory Issues: Usually caused by mold found in wet bedding or feed (more on this later).

Vent prolapse: The vent prolapse generally occurs after egg laying but can be a result of mating. It usually fixes itself but we have a guide here if needed.

Wet feather: This is common with ducks that do not have regular access to water or where the water available is heavily contaminated. Basically the preen gland at the base of the tail stops working and the feathers cannot be oiled, hence the bird is no longer waterproof. 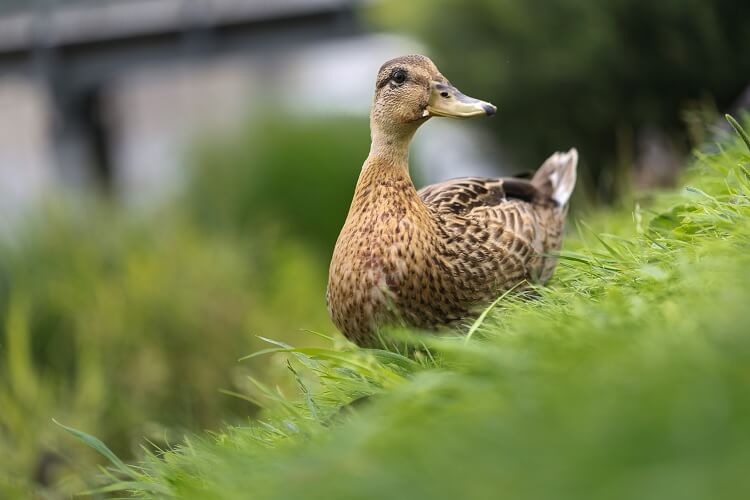 If you are planning to hatch duckling and chick eggs it is best to use two separate brooders.

Ducks like to be messy and live in a damp soggy area. Whereas chicks are messy but they like to live in a dry area.

Chicks that are raised in a moist or damp environment can suffer with brooder pneumonia.

This is caused by moldy bedding and can be exacerbated with dampness.

Also as we explained in the feed section ducks should not eat medicated chick feed as it can kill them.

So overall it is much safer to use two separate brooders. 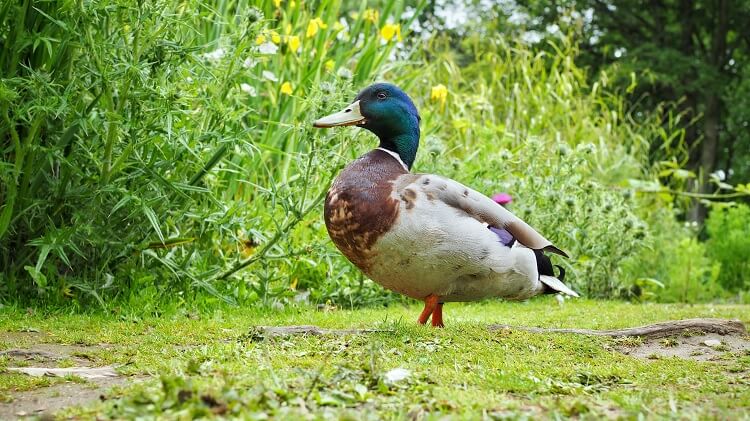 Ducks usually have a pretty laid back personality.

You might get the occasional grumpy one but for the most part they are good natured.

Bad behavior is rare, except with the males!

Drakes are oversexed and territorial especially in the mating season. If you have a drake you should have at least three or four girls for him and even then he may need to be put into time out for a couple of days. It is best to keep only one drake as the male on male fights can get pretty ugly and even bloody.

Ducks peck to show dominance to other ducks.

If they attempt to peck you you should stop this behavior before it gets out of hand.

As mentioned before, fighting behaviors are very rare between hens and ducks. Your problems will be with roosters and drakes.

For this reason you should keep drakes and roosters separated.

It is your job to observe this behavior and make sure to intervene if the behavior gets out of hand.

As you already know roosters head up a flock of hens and it is not in the nature of the rooster to be monogamous with only one hen.

He will guard the flock from predators, find food for them and mate with most if not all of his hens.

Drakes on the other hand will mate with one duck for the breeding year although he will try to breed with as many females as possible. In the wild this is not always possible since he has to guard his territory and protect his girl from other drakes.

However in a domesticated setting where he is the only drake he may try to mate with all the females (chickens included).

This is dangerous for the hens.

If he mates with a hen he can cause severe internal injuries as when chickens mate a cloacal kiss is all that is required.

Keeping a good rooster will help to prevent the drake from mating with the hens but in mating season the drake should be kept away from the hens.

However because of anatomical differences a rooster mating with a duck is not nearly as dangerous.

It should be avoided because it can produce sterile offspring however it should not harm the duck.

In this article we have covered the major problems that can arise between ducks and chickens so that you can be informed when considering adding ducks to your menagerie.

By no means are all male ducks aggressive or difficult to deal with.

Many are well behaved and act like gentlemen however it is best to be prepared.

Hopefully now you are prepared to raise ducks with your chickens! Read our complete guide to raising chickens here.

We will be talking about individual breeds at a later time, in the meanwhile enjoy your ducks and chickens.

Dealing with an egg bound chicken can be traumatic for all involved if you do not know what to do about it. The good news is that egg bound chickens are not at all that common. However some hens will suffer from this during their Read More →

Can Chickens Survive In Freezing Temperatures?

Chickens actually thrive in colder temperatures. It is the heat that really drains your chicken and can cause some significant health problems. However this does not mean that chickens can survive all cold temperatures. But just how cold is too cold for chickens? In this Read More →

Many folks would like to keep chickens but think they do not have enough space for them. Today we are going to look at a few breeds that can live and thrive in a small yard. When thinking about getting chickens for your backyard there Read More →