The rarity of a chicken breed is a somewhat subjective thing.

How many times have you seen chickens advertised as rare or even extremely rare only to find that while the breed may be uncommon it is not in fact that rare?

Today we are going to look at some breeds that are truly rare.

The Livestock Conservancy definition of rare is less than 1000 birds globally.

In addition to the Conservancy’s numerical requirements we have added another parameter – the breed must be over 200 years old.

This way we can also showcase some breeds from around the world.

Are you ready to learn about the rarest chicken breeds around? Keep reading…

The Dong Tao or Dragon chicken may be one of the most unusual chickens you will ever see.

They are a huge chicken with roosters reaching 12lb and even hens reaching 9lb.

Whilst their body is large it is their legs that are the main attraction. Their legs are red and scaly and can become as thick as a man’s wrist.

This rare breed is considered an eating delicacy in Vietnam and was once raised only for royalty.

Today a pair of Dong Tao breeding birds can sell for as much as $2000.

As for their appearance they have a pea comb with bright red ear lobes and wattles. Hens have an off white colored plumage while the boys are black breasted reds.

Interestingly chicks are usually incubated by machine as Mama’s big feet tend to crush the eggs.

Also the hens are cyclical layers – this means they will lay eggs for 2-3 months and then rest for a while before starting up again.

In this manner they lay around 60 eggs per year.

Overall this rare chicken is good natured, calm and friendly towards humans.

A healthy Sultan is a stunning sight to see.

You can find these chickens in three colors: black, blue and white – white is the easiest to find and most well known. Blue Sultans are very rare.

They originated very early in the Ottoman Empire (14th century) and were kept as ornamental birds in the Sultan’s palace.

This is a standard sized chicken with roosters weighing 6lb and hens weighing 4lb. They also come in bantam size which is even rarer!

Hens are poor layers and if you are lucky they will lay two eggs per week.

The Brabanter is an old breed dating back to 1676 (at the very least). During this time she was developed in the historic Brabant area which is where their name comes from.

Brabanters are small chickens with roosters weighing 4-5lb and hens weighing even less!

They are unusual looking chickens with a crest and a beard. Their nostrils are large and wide and they usually do not have any wattles.

You can find them in several color variations including gold, silver spangled or cuckoo.

In the backyard they are a shy, calm, intelligent and friendly chicken. They love to free range and will lay around three large white eggs each week.

Another bonus is she will rarely go broody.

The breed was almost extinct by the 1900s however they were saved by enthusiasts.

They still remain very rare and in need of conservation. 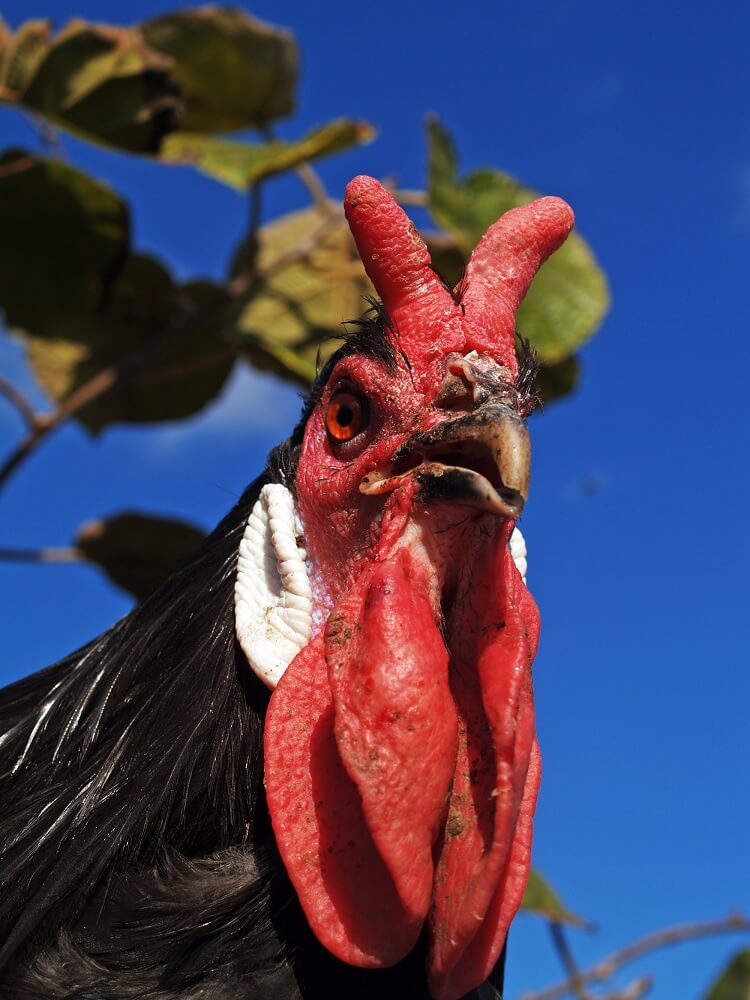 The La Fleche is an ancient French breed and their name translates as broken arrow.

It is thought this breed comes from the town of La Fleche near Le Mans in France.

Back in the fifteenth century it was very popular as a table bird. However this chicken is a slow grower and it can take around ten months before it is ready for market.

It is this slow growth that has likely seen the gradual demise of this lovely chicken.

In addition to being a table bird they are moderate layers of large white eggs. You can expect around three per week or 180 per year as an average.

The La Fleche is a unique looking chicken.

They have a V-shaped comb and because of this are known as the Devil bird.

You can expect roosters to weigh around 8lb and hens to weight 6.5lb.

These chickens are not suited to urban living as they prefer to free range and fly a little.

Fortunately in recent years the breed has started to gather interest again. However they still remain rare.

The Breda fowl is another very old breed from the Netherlands.

They have been portrayed in paintings as far back as 1660 where they were shown as barnyard fowl.

She was popular in the US prior to the Civil War and was known under a variety of names including: Guelderlands, Kraaikops and Crow heads. However their popularity started to fade in the 1800s until it was gone from the US completely.

Fortunately the Dutch maintained the breed however its popularity was declining rapidly there too.

This is a calm, friendly, curious and alert chicken.

They like to free range but seem content to stay around their home area after their daily walkabout.

The Breda has a very upright stance with vulture hocks and feathered legs. Their thighs are muscular and if startled they can do a pretty good standing leap.

She is well suited to cold climates as she does not have a comb. Instead they have small tufts of feathers on their head that are not prominent.

Ear lobes are white and the small wattles should be red – like the Brabanter, the Breda has large nares.

Breda hens are moderate layers of large white eggs and can produce around three eggs each week.

You will find them in black, white, blue, splash and mottled.

Currently the Breda is not a recognized breed in the US but enthusiasts are working on following the Dutch standard of perfection.

Bantams exist too but they are exceedingly rare. 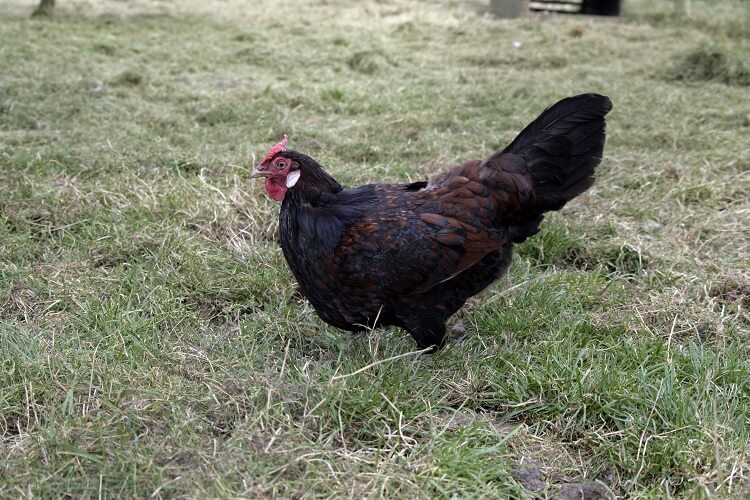 The Old English Pheasant fowl is a very old breed from England.

They were created from several types of utility fowl that were popular on farms in Lancashire and Yorkshire.

Many of the old type of pheasant fowl were apparently absorbed into the Hamburg breed, but a group of enthusiasts scoured the country and found birds that had not been absorbed. As a consequence in 1914 the chickens were given the name of Old English Pheasant fowl to protect the breed.

Old English are an active and flighty breed that do best as free rangers – they do not tolerate confinement well at all!

They are a pretty chicken with tight brown and black feathering.

This feathering acts as camouflage and helps protect them from predators whilst free ranging.

They are not overly broody but they do make good mothers if they have chicks.

Overall this is a rare dual purpose chicken that would be ideal for homesteads.

The Burmese bantam chicken is perhaps the rarest chicken.

Sadly they have been teetering on the brink of extinction for several decades now.

In fact at one point it was considered extinct. However in the 1970s a few birds were found in a very small flock.

The fertility of this breed was not the best so they were bred with other similar breeds – Barbu D’Uccles being one of them. Fortunately this has invigorated the breed and the flock continues to grow slowly. We know the breed is old since they were mentioned in one of Charles Darwin’s books (The Variation of Plants and Animals under Domestication).

Burmese are true bantams – they have a single comb with a slight tuft/crest of head feathers.

Their plumage is white and they have vulture hocks with feathered legs that are bright yellow in color.

You will notice they have abnormally short legs. This is caused by a ‘creeper’ gene which sadly also causes high mortality in embryos which has probably led to it being so rare.

Roosters will weigh around 600g with hens weighing only 500g.

Overall this is a quiet and friendly chicken that would make a wonderful addition to your backyard flock. 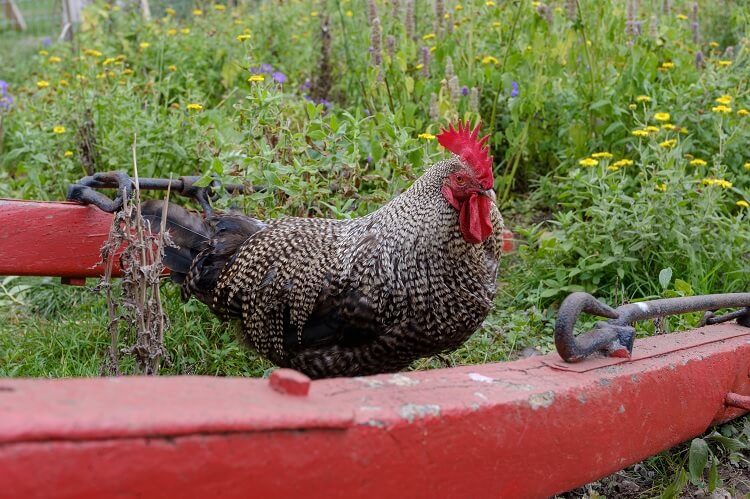 Scots Dumpys come from Scotland and are an endangered breed.

It was thought they were actually extinct back in 1970. However a small flock was located in Kenya and returned to the UK.

They are a good dual purpose breed.

Hens will lay around 3 white eggs each week – they are good sitters and make good mothers too.

She is a good little forager and loves to free range.

You might be wondering why is it called a Dumpy?

The Scots Dumpy has the creeper gene (chondrodystrophy) which gives them abnormally short legs. Over the years they have also been called Creepers or Crawlers.

The Rare Breeds Survival Trust lists them as endangered and in need of keepers.

The Onagadori is famous because of their tail.

It is only a rooster’s tail under certain conditions that can grow like this.

A hen’s feathering is more like a regular chicken and will not grow to these extreme lengths.

The breeding of this chicken began in the seventeenth century in the Kochi prefecture of Japan.

In 1952 the Onagadori was designated as a Japanese National Natural Treasure.

Unfortunately now only a handful of breeders exist – it is estimated only 250 chickens exist now. These days the Onagadori is purely an ornamental breed.

Hens only lay around 80-100 small light brown eggs and they are non-sitters.

You need to be an experienced poultry keeper to be able to care for this chicken.

Their coop and run need to be large and kept very clean. Also perches need to be placed high to protect their tail feathers.

We have showcased some of the rarest chicken breeds here.

Unfortunately some of these breeds are threatened with extinction in the near future.

While survival trusts do their best to raise these breeds they do need more help!

If you have seen any breeds here that you find interesting or think that you might like to raise contact your local rare breeds trust and see how you can help.

The Livestock Conservancy is a good place to start in the US. Other organizations such as Rare Breeds Canada or the UK’s Rare Breeds Survival Trust also maintain lists of endangered breeds.

Preserving genetic diversity is very important to the health of current breeds and the future of poultry.

We hope you have enjoyed this small selection as it was hard to choose from so many deserving breeds!

The Mille Fleur d’Uccle is a captivating little chicken. Their name (Mille Fleur) translate to a thousand flowers, and this goes someway to explain their appearance! d’Uccles have tons of personality. They are friendly and it won’t take long before they talk to you and Read More →

Automatic chicken feeders sound wonderful. They can certainly make life a bit easier with the day to day chores of feeding and watering your flock and will save you a little time here and there. There are a few different types available so today we Read More →