Rhode Island Reds are one of my favorite chickens.

They have bags of character, personality and a real zest for life.

As a homestead bird they are one of the best breeds out there in my opinion. They are healthy, resilient and will lay plenty of eggs for you.

They can be pushy and assertive with other breeds, but they certainly do not lack personality!

These chickens have only been around for about 100 years but they have gathered a firm following, read on to find out why… 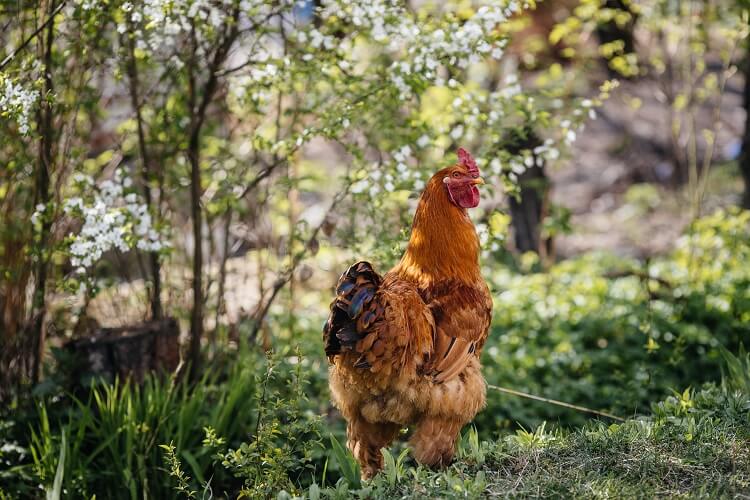 The Rhode Island Red is a very useful, delightful and entertaining bird to have in your flock.

She does not need much care other than the basics of food, water and shelter. They are hardy chickens that are not prone to disease, which makes them ideal for beginners.

They have become one of the staple birds of the modern homesteader as they have been proven over the years to be a reliable, no nonsense breed.

With the Rhode Island Red there are two strains: the production and heritage strain.

Heritage varieties do not put out quite as many eggs each year but they will lay for a longer period of years.

If you want more eggs, choose a production Red as they are prolific in the egg production area.

This hen makes a great starter chicken for anyone because of the ease of care and low maintenance. They are also pretty kid friendly (with the exception of the roosters). 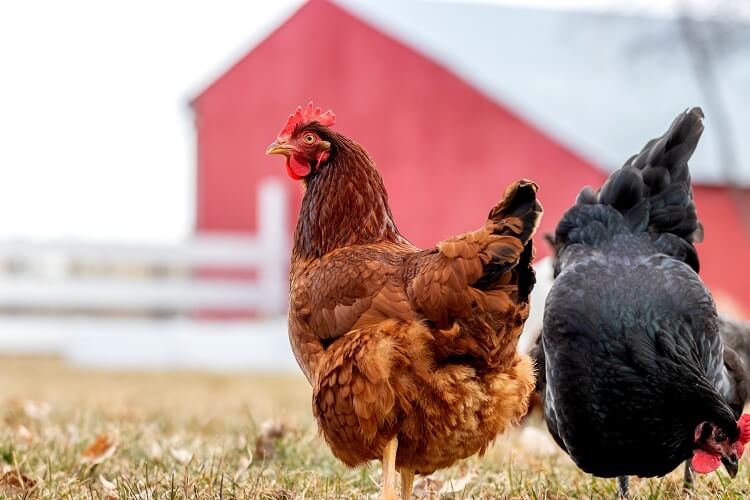 Their body is somewhat rectangular and solid looking.

Rhode Island Reds are well proportioned, with a head held high and the tail at a 45 degree angle. Their feathers are tight which means they sit together compactly – a trait of the Malay breed used to create this breed.

What surprises a lot of people is the fact that Reds can have either a single or rose comb. The single comb is upright with well-defined points, and the rose comb has a rear facing leader spike.

Wattles and ear lobes are red (like their comb), eyes are orange/red in color and the beak is a horn color.

Their skin, shanks and feet are yellow.

Reds are considered to be standard sized birds.

The primary color of the feathers is a beautiful shiny chestnut red.

Occasional black feathers can be found in the tail and wings – this is called ‘smutty’ by judges and points will be taken from the overall score of a competition bird.

There are Rhode Island Whites but they are considered a separate breed.

What Is It Like To Own A Rhode Island Red? 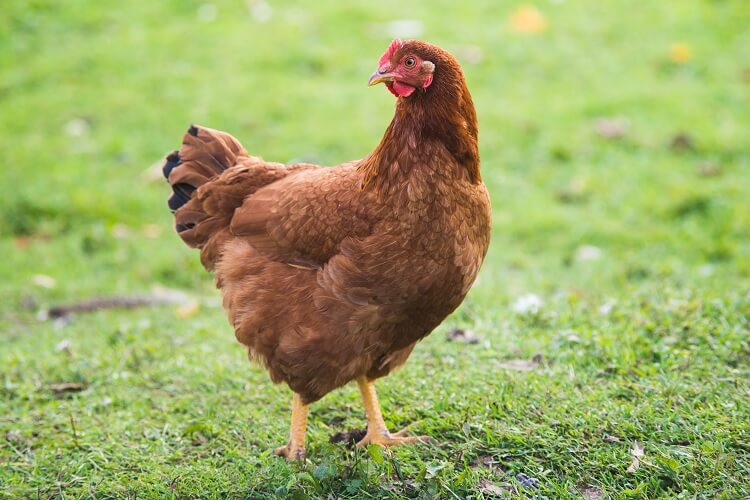 These chickens enjoy being active, and are usually the first out of the coop to see what is going on and if there are any treats available!

They are intensely curious and always want to help you out or see what is in it for them.

Often they can be found foraging and can obtain a good amount of their daily nutrition by foraging.

They are not flighty or nervous birds and are generally considered bombproof, rarely getting flustered or panicked.

To sum up their personality in one word: exuberant!

Rhode Island Reds love to investigate new things and are inquisitive to the point of being nosey.

They are friendly hens and fairly docile with other birds of a similar disposition – however they are usually mid to higher level in the pecking order. This means that with very shy or docile breeds (such as Cochins or Polish) they can turn mean and unpleasant, so be careful if you are mixing breeds.

As for the Roosters, they have a bit of a reputation for being obnoxious. Small children should not be allowed near them especially in the breeding season.

Hens are not known for broodiness but occasionally one will surprise you and become broody.

Once they have decided to be broody they are usually good sitters and good mothers.

Their egg laying will depend on the strain you buy.

Reds from the production strain are prolific layers. They will bless you with 5-6 eggs per week, which equates to around 250-300 eggs per year.

Heritage strains will lay less eggs – more in the range of 150-250 per year. Weekly this works out to be 3-4 eggs (which is still a good number).

Rhode Island Red eggs are medium to large and light brown in color.

Reds can be raucous and rowdy at times – their egg song in particular is loud and proud. They are not noisy all the time but they are a talkative bird and enjoy human interaction.

If you have close neighbors who enjoy peace and quiet, these birds may not be for you. 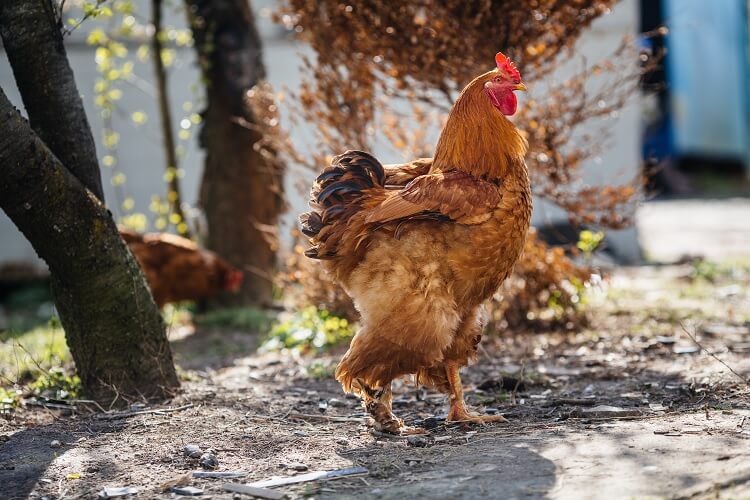 Rhode Island Reds are very adaptable birds and seem to thrive where others do not.

These chickens will tolerate a wide variety of conditions – anywhere from sub-zero in winter to 100F in summer.

Just make sure they have the necessary dry, draft-proof shelter and other considerations such as shade, food and water.

Rhode Island Red chickens are vigorous birds who do not really have any health issues to speak of.

However just like with all feathered friends, lice and mites can still be a problem so be watchful. Intestinal parasites can be kept under control with regular checks and medication when needed.

A good 16% layer feed will do them perfectly.

I find that free feeding is best for these birds so they can help themselves when they need to eat.

If given the chance they like to free range and are excellent foragers.

They are economical to feed and will find much of their diet themselves if allowed to free range. They will be single minded in pursuing and devouring bugs such as ticks, caterpillars, worms and butterflies.

You will find they will also pursue larger prey such as mice and frogs!

Inside the coop they will need a minimum of 4 square feet per bird.

Reds are an assertive bird and in a confined area without enough space they can become quite ugly towards each other – so more space is better.

An average of 8 inches of perch space is adequate for the Reds. You will find during the summer heat they will like to spread out a bit but in winter they will all jam together to keep warm.

Nesting boxes should be a 12×12 inch cube or similar. If you give them too much space you will find them nesting together which can lead to broken eggs

As for roaming space, the Rhode Island Red is a standard sized bird so a minimum of 15 square feet per hen is needed. They do tolerate confinement fairly well, but make sure they have sufficient room and areas where they can be quiet if they want to. 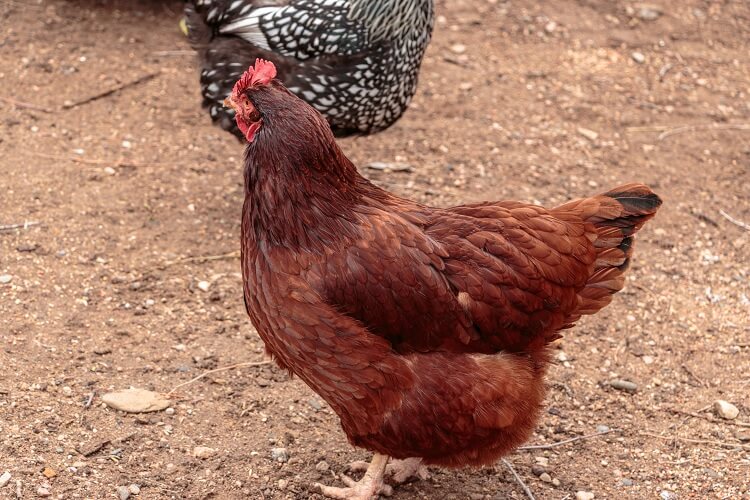 The history of the Rhode Island Red started back in 1854 when a Captain Tripp brought back a Malay rooster from his voyages.

He put the rooster in with his own chickens and awaited developments. He was rewarded with offspring that laid more eggs and was also suitable as a table bird.

The Malay rooster that started the Rhode Island breed is actually preserved in the Smithsonian Museum.

Following this early success Captain Tripp partnered with Mr. Macomber and started to experiment with the intention of making a better breed.

No records were kept so we will never know for sure which breeds, but all were selected for traits such as egg laying and taste.

As you can imagine the birds were of several different colors and conformations.

It was ultimately a Mr. Tompkins that took this bird and standardized it to the breed that we know today as the Rhode Island Red.

The name of the bird was given by a Mr. Wilbour and the breed was admitted to the American Poultry Association in 1904.

Although originally bred for dual purpose, after the second World War the breed essentially became split into two groups. The first group was streamlined by the poultry industry to produce more eggs and the second group was maintained by the traditionalists to be a dual purpose bird.

Thus the production and heritage sides of the Rhode Island Red were born.

What color eggs do they lay?
They will lay light brown, medium to large eggs.

How many eggs do they lay?
They can lay between 5-6 eggs per week.

What colors do they come in?
Rhode Island Reds are a chestnut red color with the occasional black feathers in their wings and tail.

Do they come in bantam size?
Yes. Bantams are available but not too common.

Are they dual purpose?
Yes, but it is said that the heritage type is a much better dual purpose hen.

These hens do not require you to fuss over them or treat them like delicate flowers as they can do very well for themselves.

They can thrive where other breeds fail.

Give them a basic coop setup and a basic layer feed and they will be happy.

They interact well with their owners and enjoy chatting with you and helping you in the garden.

If you are looking for a breed that gives you a great bang for your buck, look no further than the Rhode Island Red – she will not disappoint you.

The Complete Guide To Chicken Mites: Identification, Treatment And More…

Today’s topic is all about chicken mites. These little creepy crawlies can make your flocks life miserable and will keep you busy with dusting, spraying and changing bedding. Truth be told, most flocks get small infestations of lice or mites during the summer months. However Read More →

From time to time your chickens may experience something called bumblefoot. This is a fairly common occurrence in backyard flocks and especially with those that can free range. Overall bumblefoot can be miserable for your hens so it is something that needs treating. In this Read More →

Sussex Chicken Care Guide: Everything You Need To Know

The Sussex Chicken is an old and much loved chicken breed from England. They have been around for over a thousand years! These days this breed is known as a docile backyard chicken that is perfect for families looking for a good egg layer. You Read More →