Roosters can crow for all kinds of reasons.

The most common reason is the wake up crow.

This is simply their way of saying good morning and leading the flocks out to forage. However roosters can also crow to warn their flock or to announce a territorial boundary.

Some roosters are noisy in the morning, whereas others can be noisier in the afternoon.

Do you want to learn move about why roosters crow? Keep reading to learn everything you need to know… 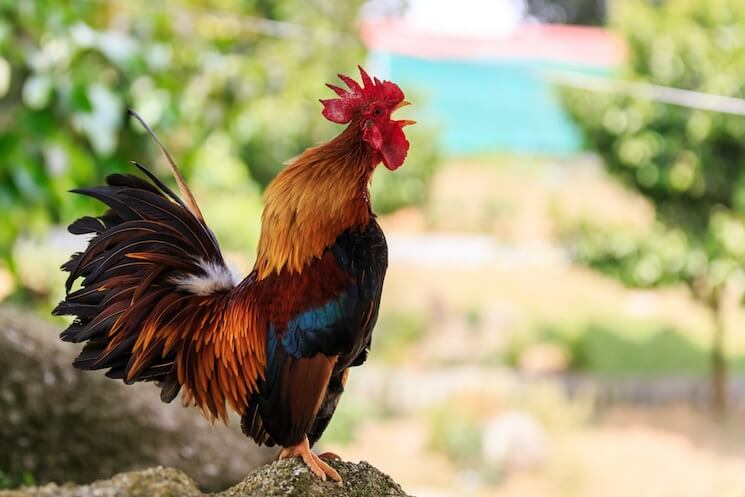 People have been trying to understand why roosters crow for years.

Roosters will crow for a few reasons.

Crowing can be used as a warning to the flock, an announcement of an intruder and many other reasons. There is no one definitive answer to explain it.

1. The most important reason a rooster will crow is to say I am here. They announce their presence loud and clear to anyone or any other roosters within earshot. In their native environment of jungles it is important to announce yourself to avoid confrontations between competing roosters. Roosters will announce their territory and in that announcement is probably a warning that goes something like private property, no trespassing! Despite some people thinking that roosters are aggressive, in their natural habitat they actually prefer not to fight unless it is completely unavoidable.

2. A variation on his crow can also be used as an alarm call. It can signal urgency and danger to any flock members that are within hearing distance. The call should send them back to the flock or freeze in place depending on the situation. You may not see a threat but you can be sure he does. His eyesight is very acute and he will spot predators that may be sitting completely still in a tree waiting for a chicken snack. 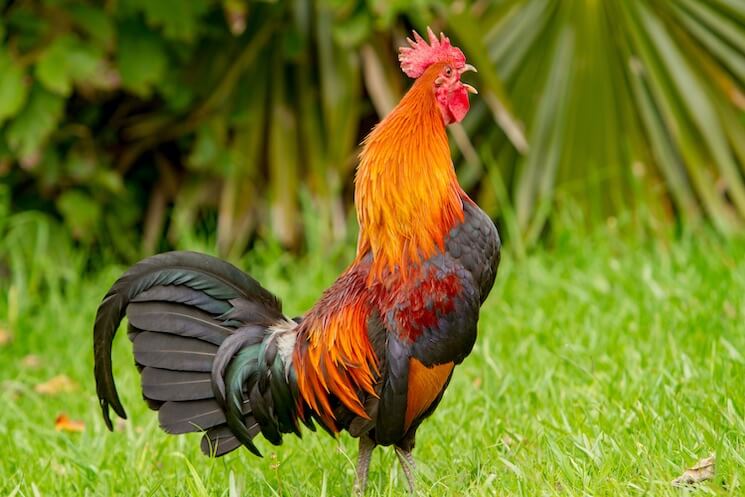 3. The most well known reason why a rooster crows is the early morning call. Roosters will start to crow before sunrise and he will be one of the first out of the coop in the morning to check the area for predators and sound the all clear for the rest of the flock. This early morning call encourages the flock to get moving and start foraging for food.

4. A rooster will crow to announce to any unattached hens that he is available. It is hard work for a young rooster to get together a flock of ladies and he will do everything he can to attract them to him, including stealing from another rooster.

5. Roosters will crow after mating to announce this to other roosters. Humans may not like the kiss and tell inference but the rooster is announcing he is one lucky boy. Crowing is used as a means of communication not only between the rooster and his flock, but other roosters and their flocks. The type of crow and the body language say a lot to another chicken.

Everyone knows that roosters crow in the morning.

The early wake-up call for the flock announces that it is time to go and find food and start the day’s activities. These early foraging activities are usually followed by egg laying, sun bathing dust baths and nap-time.

Really this is the only set time of the day you can expect a rooster to crow.

They really do not have a set timetable for crowing activities.

How much they may crow over a 24 hour period is dictated by the happenings of the day and how the rooster reacts to them and his personality.

He may sound the alarm crow if he spots a possible predator, this sound is very different from the regular crow. When the flock hears this alarm crow they will either run for cover or freeze in place and try to blend into the surroundings.

Some of your roosters will crow in the evening too.

Evening crowing is likely to announce that it is approaching bedtime and that everyone should head for the coop.

Roosters have their own agenda and will crow when they please or when circumstances dictate. If you have more than one rooster, you can expect a lot of crowing.

How Loud Is A Rooster’s Crow? 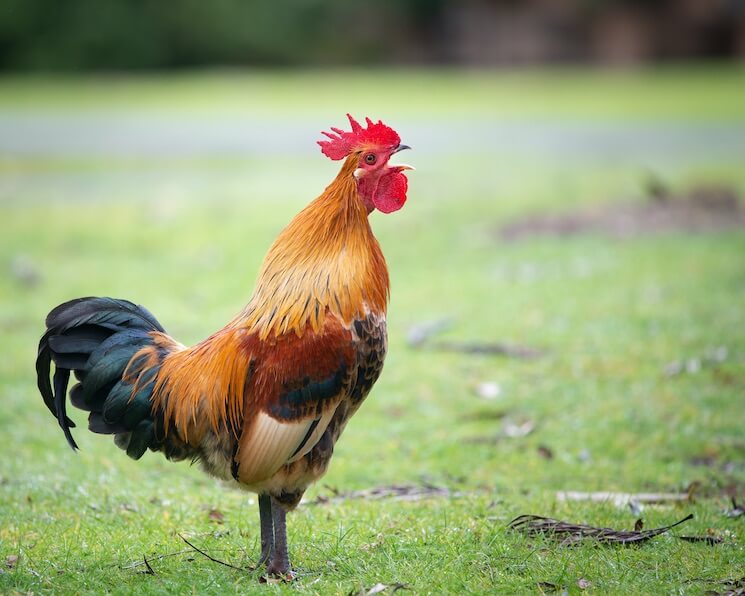 A rooster’s crow is not as loud as most people think.

Folks who complain about roosters being noisy are probably more annoyed because they were woken up early in the morning. Also the fact that the sound is intermittent can be irritating for some. He may crow, then you are falling back to sleep and then he crows again!

However a rooster crowing is only 90 decibels (about the same as a barking dog).

Hens clucking and going about their daily business make about 70 decibels (approximately the same level as human conversation).

When Do Roosters Crow?

Over the course of a normal day a rooster will crow around 15 times on average. If you have several roosters living together then the crow count will rise.

Roosters will crow at different times for different reasons.

We have already talked about the wake-up call in the morning!

In addition to this some roosters will crow during dusk to make sure the flock knows it is bedtime.

Many roosters will also crow following mating – this is sort of avian bragging rights.

You will also find that some roosters crow when the coop is locked up for the night. Perhaps this is a goodnight all, or simply them getting the last word in!

Strangers walking by, cars driving past or even the lawnmower! A rooster can react to all of these things if he thinks they are a threat. When he crows he is letting the threatening object know that this is his territory. He is also sounding the alarm so that the flock is prepared for the imminent danger.

How To Stop A Rooster Crowing

Unfortunately there are no simple or kind ways to stop a rooster from crowing.

The most humane way to stop them is to use a no crow collar.

However they can be hit and miss and a lot of the time they do not work.

The most effective way to stop him crowing is to caponize him (remove his testicles). This practice is considered inhumane by some and certain vets won’t do it. It is also not without risk and sometimes the rooster can die during surgery.

Your final option is to rehome your rooster.

The reality is that if you keep roosters then you should expect them to crow – it is just what they do! 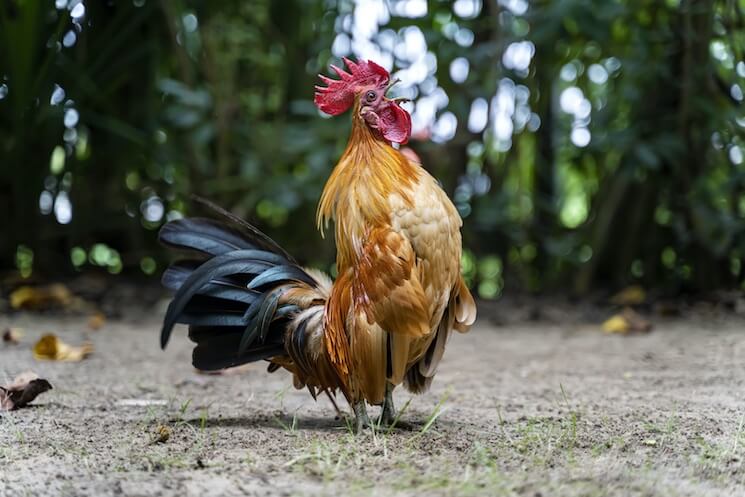 Do roosters only crow in the morning?

Roosters will crow all throughout the day and even sometimes at night.

How old are roosters when they first crow?

Most roosters will start to crow somewhere between 8-20 weeks old.

Their first crow will be rather funny and pathetic sounds, but with regular practice they will get much better!

Which rooster will crow first?

The head rooster will be the first to crow in the morning. This is followed by his subordinates or other roosters nearby. Anyone who crows out of turn in a flock will be subjected to a sharp reminder of who is the boss.

Research as to why a rooster crows is still ongoing and until we can speak chicken we can only surmise some of what they are communicating!

Here on the farm we currently have six roosters in three flocks.

As you can imagine we are immune from being disturbed by crowing. Watching the boys crowing, it can be hard to tell specifically why they are crowing, sometimes there seems to be no reason at all.

Some roosters are more verbal than others, some are noisy in the morning and quiet in the afternoons. I think it basically depends on the individual rooster and there really is no predicting whether or not they will be overly verbal.

Those that are more confident of themselves and their surroundings may not need to crow so frequently.

One thing that is known for sure is that the head rooster of the yard will start the crowing in the morning. Once he has crowed, all the other roosters will crow in order of seniority. A rooster that crows out of order will be reprimanded in no uncertain terms.

Roosters that live in male only bachelor enclaves generally get along quite well. There is a head rooster and a pecking order. They will live together peacefully although every now and then a rooster may leave the flock to form his own flock, or new roosters may join. Crowing is in strict order in these groups.

It is a sad fact that because of their crowing, roosters get a very bad deal from humans. Zoning laws prohibit them from living in urban areas because of the noise. They are also seen as unproductive by lots of people because they do not lay eggs.

However, roosters really do enhance a flock by providing security and cohesion.

If you are looking to add a rooster to your flock then why not read 15 Best Rooster Breeds For Your Flock.

How Many Roosters Can I Have? The Golden Ratio Explained

Just how many roosters should you keep with your hens? As you shall see there is no perfect number or rule to follow as each flock is different. However there are certain guidelines and rules which you can use to help put you in the Read More →

Possums are scavengers and they will tend to eat carrion. They are part of nature’s garbage disposal team! Possums also eat a wide variety of other things that we consider to be pests or nuisances. Unfortunately they do also eat chickens. However, they will rarely Read More →

How do you get the most eggs from your backyard chickens? It may sound like a difficult question but if you have kept chickens before you already know the answer – you treat her like a queen! To get your chickens to lay lots of Read More →