The Salmon Faverolle is a delightful hen to add to your flock.

They are friendly, funny and lay beautiful large eggs.

Faverolles are the barnyard clowns and their antics will make you laugh out loud – especially when they get into a discussion with you!

Are you looking for a great all-purpose chicken that is suited for small homesteads?

The Salmon Faverolle is a wonderful hen.

They make an ideal addition to a small homestead as they are a good family bird. She is docile and kids love to pick them up and cuddle with them (this is why they are in our 8 Best Lap Chicken Breeds list).

One thing that makes them so popular is that they are very docile which makes them much easier to deal with.

They have muffs, a beard and feathered legs that give them an adorable appearance. The look pairs well with their personality which is curious, talkative and a bit quirky.

Officially their name should always be spelt with an s but the s is silent and not pronounced.

Overall this is a sweet low maintenance breed that will thrive in a loving home.

5 Reasons To Keep This Chicken 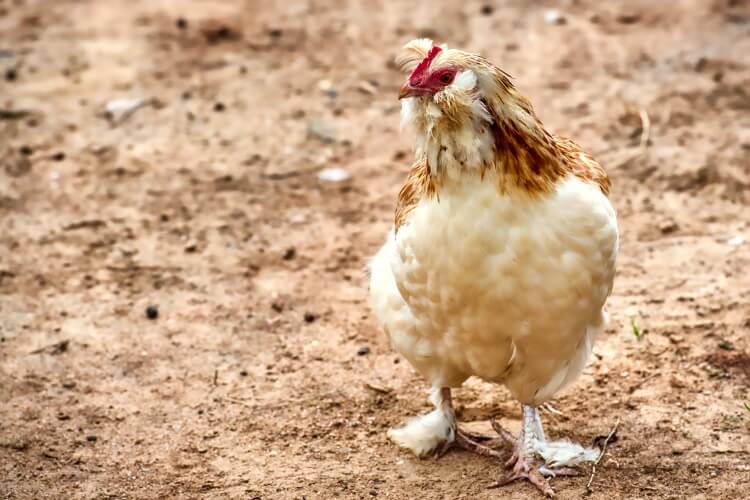 Salmon Faverolles were first bred back in the mid-1860s in the town of Faverolles in north central France.

They were created from a mixture of other breeds including: the Houdan, French Rennes, Flemish Cuckoo, Malines and Dorking. It is thought that there may be other breeds in the mix however we cannot know for certain because no records were kept.

French farmers wanted to create a dual purpose utility breed for the French markets of Paris and the surrounding areas.

During this time the prototype battery cage was introduced to poultry farming.

The Faverolles main competitor (the Houdan) detested caging and did not do well. However Faverolles took it in their stride which led to their popularity sky rocketing in the markets of the day.

Salmon Faverolles were first exported to the UK in 1894 where the British breeders worked with the breed raising it to standard.

In the 1900s the Faverolles finally reached the shores of America and were accepted to the standard here in 1914.

There are several varieties of Faverolles but the salmon and white colors were the only ones that became popular in the US.

The Salmon Faverolles was once considered endangered, but thanks to hard work by the enthusiasts it is no longer threatened. Unfortunately though other varieties of Faverolles are still considered to be a threatened breed by the Livestock Conservancy. 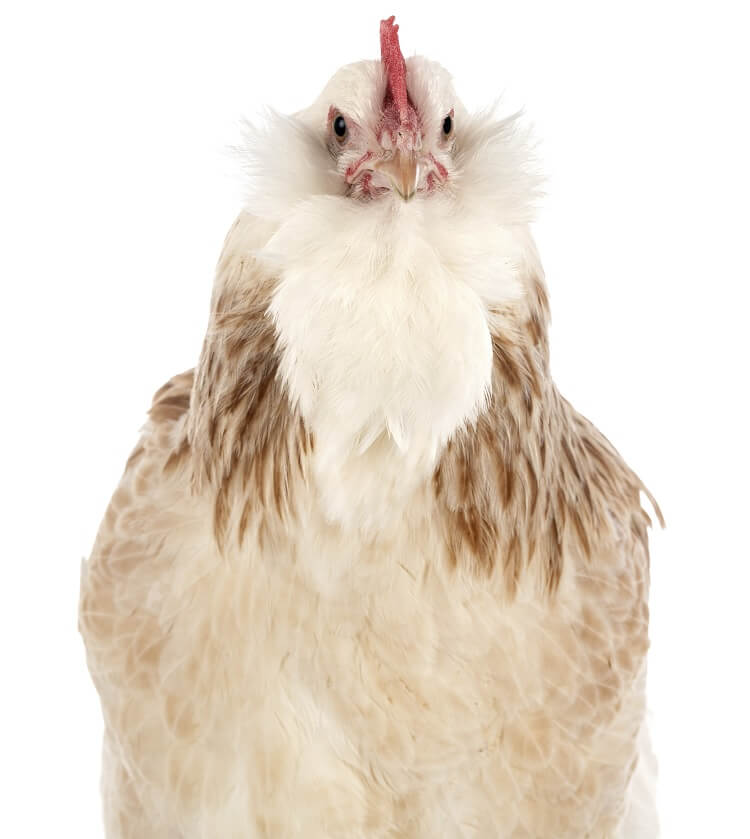 Salmon Faverolles are a fairly compact hen that carry themselves fairly low to the ground.

She has a single comb, muffs and a beard which gives them an adorable fluffy cheeked look. Their beak is horn colored and short.

They also have very small wattles and red ear lobes.

Her body is quite broad and deep. When seen from the side they are a short rectangular shape with a slight dip in the back.

They have feathered legs and feet with five toes.

Their Salmon color is actually more of a light honey brown color and it is exclusive to Faverolles. The darkest areas of plumage are on the back, head, wings and tail. The belly and breast are a paler and more light straw color, with their under feathering being a light gray color.

He has black feathering on his beard, tail and belly.

The fluffy feathers and dense undercoat make this chicken appear bigger than they actually are.

Hens will weigh in around 6.5lb and the roosters at 8lb.

Bantams are 26oz for females and 30oz for boys.

What Is It Like To Own A Salmon Faverolle Chicken? 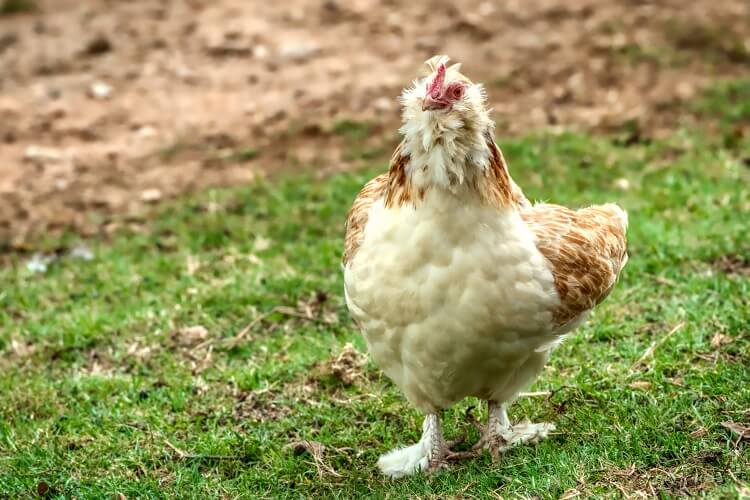 This breed just loves to be active.

They seem to rush around and always check stuff out in case they miss something.

You will notice they often bump into each other in their hurry to get somewhere – this added with their appearance gives them a clownish demeanor.

They tend to forage as a loose knit group and chatter constantly between themselves. Despite this casual appearance though, they keep their eyes open for any danger and are quite predator savvy. If they get startled they can fly a bit but not very high. It is more of a hop/fly/run but they can move remarkably quickly if they need to.

Salmon Faverolles are good at foraging and enjoy rooting around in the garden looking for treats.

They are especially drawn to leaf piles and will happily make a huge mess of them.

This is a happy little hen.

They are cheerful and have a sunny disposition, you will rarely see them grump.

Salmon Faverolles race around the yard, bump into each other and chatter away all at the same time. They are animated and love nothing better than foraging as a loosely knit group. They are very entertaining to sit and watch.

You should expect them to fit into the middle of the pecking order. More assertive members of the flock (like Rhode Island Reds) will pick on them but they shake it off and do not seem to bear a grudge.

Even the roosters are pretty laid back and relatively docile.

As far as humans are concern they are friendly.

Some like to be picked up, others do not, but many do become lap pets.

Kids cannot resist the fluffiness of these ladies – beards, muffs and dense under feathering make them appear very fluffy indeed.

They are inquisitive and will come and check out what you are doing and taste test everything. 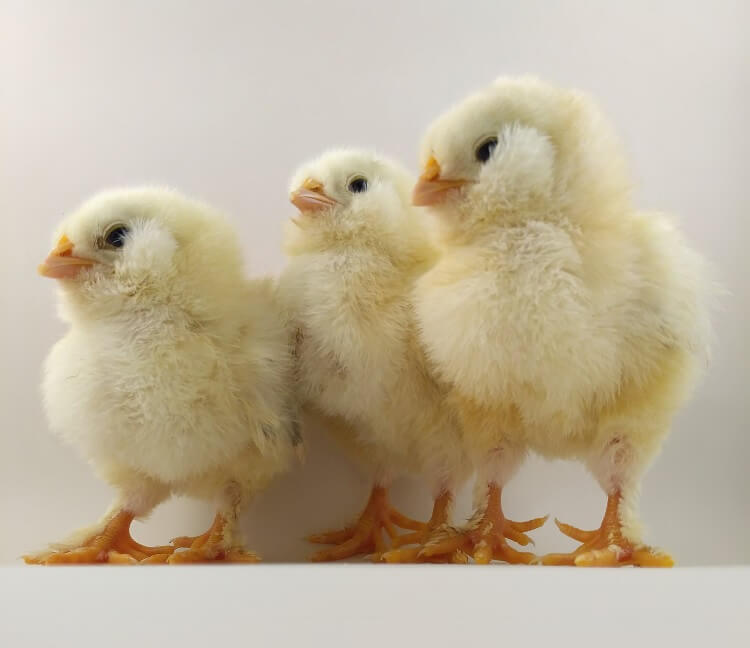 Faverolles are good egg layers and can lay up to four eggs a week.

They are known for maturing quickly and can start laying a little before they are 20 weeks old. They will also lay into the colder months but unless you add light, they will not lay through those dark and gloomy months of winter.

Their eggs are medium to large in size and a tinted color.

Some folks say they are broody but mine are not overly broody. One hen out of six goes broody every year but she is easily deterred.

They like to chatter and talk to you but they are not overly noisy.

The loudest they get it during the egg song or to give a predator warning. Otherwise they talk quietly and they love to talk with you. I have entire conversations with mine and they always say goodnight to me at bedtime.

Because they are quiet they make good chickens for urban living as they are unlikely to be too disruptive as far as noise goes. 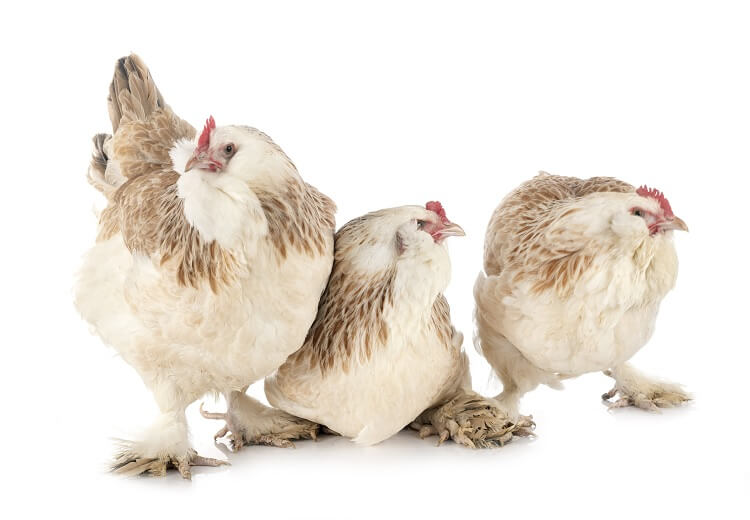 Salmon Faverolles are usually a very healthy and strong chicken.

They are not prone to any particular diseases or genetic problems.

Just remember though that this chicken has lots of feathers so lice and mites can be a problem.

You should check around their vent and under their wings regularly and use poultry dust as necessary to prevent them from being overloaded with parasites.

Check their legs regularly too.

Birds with feathered legs also have a tendency to get scaly leg mite – their feathering makes it difficult to see.

If you do find mites then do not remove the leg scales. Instead you should apply Vaseline jelly and rub the jelly upwards so it gets under the raised scales – this will suffocate the mite. Repeat the treatment regularly until the mites are gone.

Overall a healthy and happy Salmon Faverolles should have an average life span between 5-7 years.

As chicks, Salmon Faverolles need a good quality crumb feed with at least a 20% protein content.

This will supply them with all the nutrition they need until they reach week 16.

At week 16 you can slowly transition them to a pellet.

Now you can also give them oyster shell and grit in separate bowls.

If you let them free range they will supplement their feed with a variety of seeds, greens and bugs – all of these are very nutritious for your flock.

Clean fresh water should always be available to them too. You can read 5 Best Chicken Water Cups: Which Is Best For Your Flock for more help. 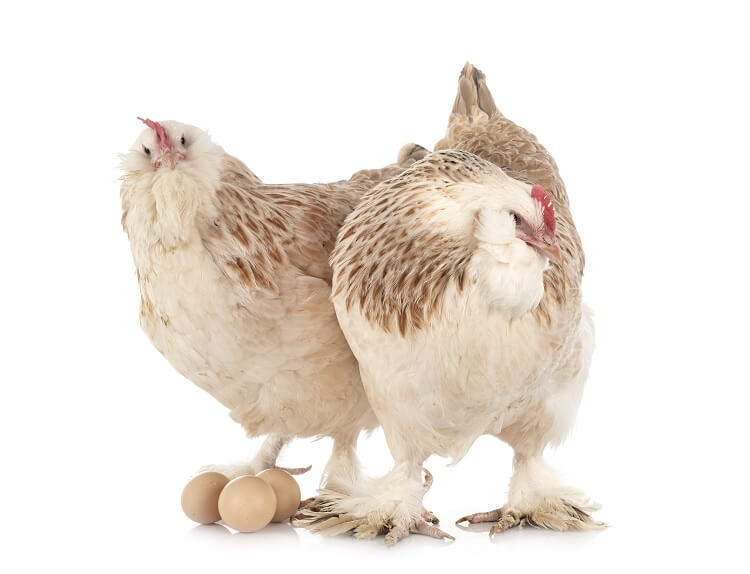 You need to remember that Salmon Faverolles are a medium sized chicken so they need at least 4 square feet of coop space each. During the colder months they will snuggle together, but because of their dense feathering they like to spread out in the summer.

Give them enough space to spread their wings and they will be happy and well-behaved girls.

Too little space results in antisocial behaviors such as feather picking and bullying.

As for perches they will need 8-10 inches per chicken.

If you can give them more space and several perches to choose from so much the better.

For chicken nesting boxes they will need 12×12 inch nests. They do like to be comfortable so put in plenty of nesting material for them to sit on.

Now onto outside roaming space.

Salmon Faverolles do very well in confinement as long as they have enough space.

You should make sure they each have at least 8 square feet of run space. If you want to keep them in a run then you can erect a three foot fence to keep them penned as they cannot fly. As a docile hen they can get picked on by other breeds so having quiet areas where they can hide is important.

However if you can let them free range then they make great little foragers. They tend to stick in little groups although they do wander off on solo trips every now and then.

Hunting up bugs and seeds keeps them active, engaged and supplements their diet nicely.

Salmon Faverolles are a compact and hardy hen.

They were originally created for the markets of Paris but now thrive here in the US in small backyards and homesteads.

Their happy go lucky nature and indifference to confinement has helped their popularity to surge in recent years.

These hens are good egg layers and can make a good mother too if you let her brood. Not only are they a chicken but they can make great pets as they are talkative, active and enjoy cuddles and treats.

They are good for the northern climes as they have such dense plumage, but they need shelter from the heat and lots of cool water during the summer months. Just keep a close eye on their feet as during the winter season snow can accumulate on their foot feathers and cause frostbite.

Do consider adding some of these delightful chickens to your flock, they will make you glad you did.

Imagine your chickens in their coop during the wintertime. The snow is falling outside and the wind is throwing leaves off the nearby trees. Your chickens are huddled together and shivering. Maybe it is time to consider a chicken coop heater? These heaters are used Read More →

As backyard chicken keepers we do not think too much about a chicken’s crop. However it is a vital piece of the digestive tract that serves as a holding place for undigested food. In the wild, chickens have to eat their food quickly as predators Read More →