The Silver Laced Wyandotte is an American treasure.

This is a dazzlingly beautiful chicken that is best known for the color of their feathers.

She is best described as easy going, independent and can fit into most flocks easily. Better yet they produce a decent amount of eggs each year too! 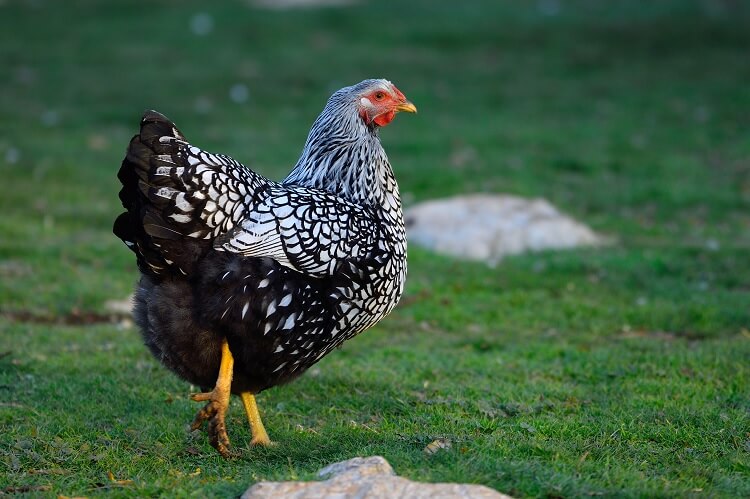 The Silver Laced Wyandotte is one of the prettiest chickens around.

They have beautiful silver and white feathers that are delicately laced with black. However these chickens are so much more than just eye candy.

Wyandottes are a hardy dual purpose breed. This means not only do they perform well in egg laying but they also make a respectable table fowl too.

They are best described as vigorous, calm and self-sufficient.

There are over 9 varieties of Wyandottes, however the Silver Laced was the first of the Wyandottes to appear and was closely followed by the Gold Laced variety.

The name Wyandotte came about as a tribute to the Wendat or Wyandotte Indian people who had befriended and assisted the white settlers of the area when they first arrived.

Although they had an extinction scare back in the mid 1900s, these days the Wyandotte is thriving and is well suited to backyard life as a quiet, hard-working and beautiful chicken. 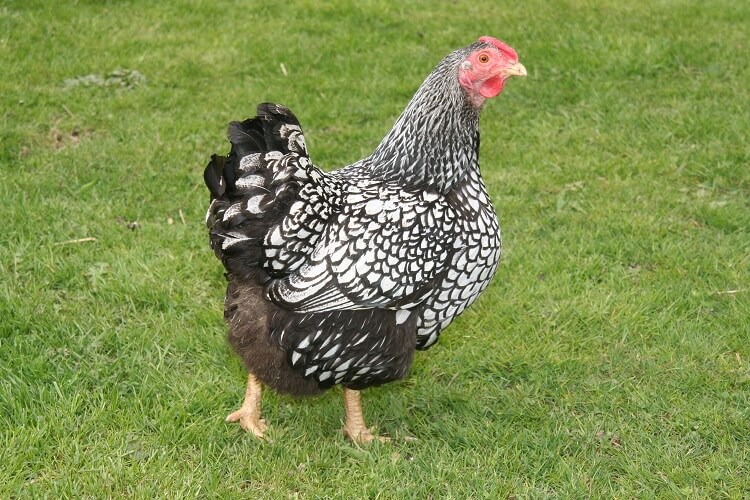 The Wyandotte is a large bodied bird, like the Brahma.

From the side view they almost look plump!

The Silver Laced Wyandotte is a compact and robust chicken that is quite wide.

A Wyandotte’s head is broad and crowned with a rose comb. Comb, wattles and earlobes are red. The beak is stout, well curved and horn colored and their eyes are reddish bay.

Their feathers are slightly tight and in the silver laced bird the feathers are black edged giving the appearance of lacing. The Wyandotte is a yellow skinned bird, their shanks are yellow and should be clean of feathers with four toes to each foot.

The male hackles and sickles will be noticeably different.

However sometimes a rooster will be born with hen feathering – this means he will have feathers that are the color and shape of the hen bird.

They are considered a large standard bird.

Ladies tend to way around 6.5lb and Roosters come in at 8.5lb.

There is a bantam sized Wyandotte too that weighs 3–3¾lb.

Whilst there are nine recognized Wyandotte varieties the Silver Laced should have silver and white feathers only.

What Is It Like To Own A Silver Wyandotte? 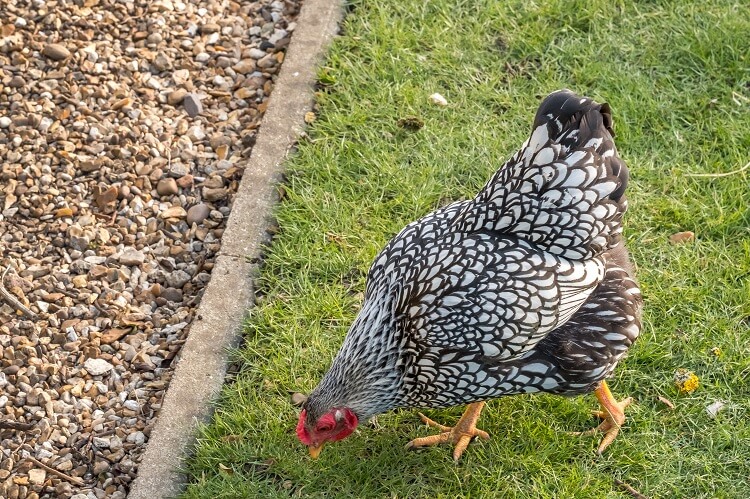 Often described as dependable, easy going and cold hardy, this bird was bred with the northern winters in mind. They seem to shrug off the cold well and with their rose comb rarely get frostbite.

You will most commonly find these chickens grouped together with their own kind – they are somewhat indifferent to other chickens.

They do enjoy foraging and the exercise of patrolling the yard helps to keep them fit and active.

This is a placid and steady bird that is not known for flightiness and will rarely fly.

Overall the Silver Laced Wyandotte has a calm and steady demeanor rarely getting excited or flustered about anything.

As they keep their own breed they sometimes appear aloof. However they just like to stick with their own kind. This does not mean they are aggressive. In fact even the roosters are known for being gentle and non-aggressive.

However they do not tolerate any nonsense from other birds and will put them firmly in their place.

This assertiveness places them mid to upper levels in the pecking order.

They are not cuddly or a lap chicken by any means, but they do enjoy some human company and treats. 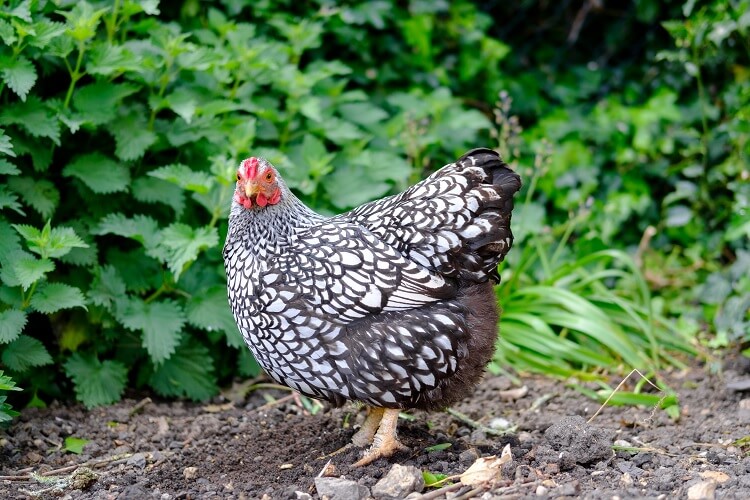 This breed is known to lay lots of cream or light brown eggs – expect around 4 each week.

Silver Wyandottes will start laying anytime after 18 weeks or so.

As for broodiness they are seldom broody however some strains can be broody (it is luck of the draw).

If your hen does go broody she will make a good mother.

Wyandottes are a quiet bird.

Apart from the expected egg announcements and the rooster calls they are not known for making much of an uproar.

This makes them an ideal bird if you live in an urban setting and have nearby neighbors that may complain. 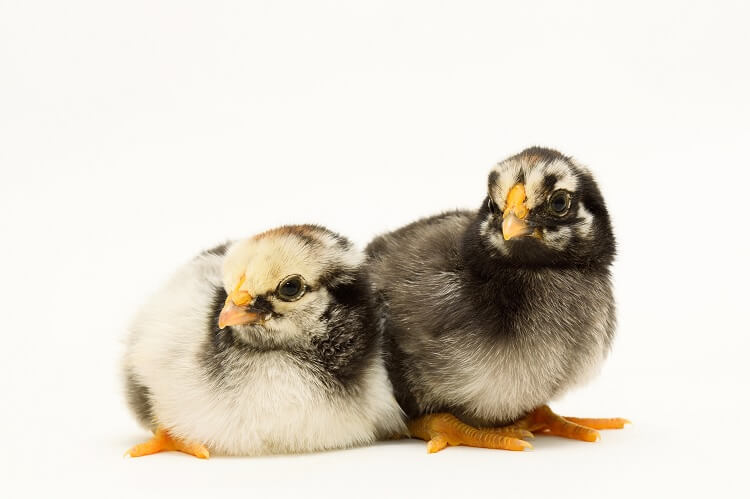 In general all Wyandottes are hearty and strong chickens.

They shake off the cold and rarely appear under the weather. And if allowed to forage they can be very self-sufficient.

One thing you need to pay attention to is heat exhaustion. Because their feathers are very dense they can become overheated in the hot summer months.

You need to offer lots of shade and cool water.

Also because of this feathering the usual array of parasites such as mites, lice and worms can be troublesome.

Regular checks and medication will keep these problems away.

Silver Laced Wyandottes also happen to have very fluffy butts so it can get quite dirty back there.

Occasionally you may need to trim the feathers to keep them clean. Also if you are breeding your chickens this fluffiness can sometimes cause fertilization problems, so trimming those feathers can help.

Once these chickens start laying they will thrive on a quality 16% layer ration.

You can also offer them oyster shell in a separate dish and insoluble grit too if they are confined.

Throughout the molting season you can increase the protein content of their feed to 20%.

Silver Wyandottes can tolerate either free feeding or scheduled feeding times. Just pick one and stick to it. 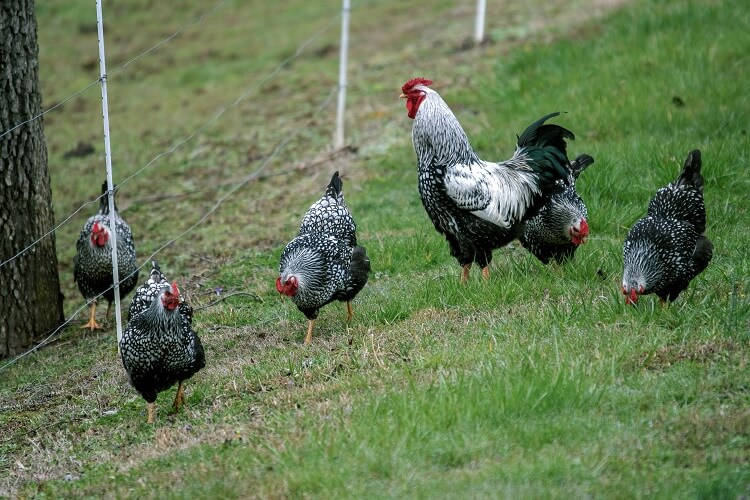 A general rule for a standard sized chicken is to give them 4 square feet each of coop space.

As the Wyandotte is slightly on the larger size this is the minimum recommended size for inside the coop. If you are able to provide a little more room then you should – this is a blessing especially with such large fluffy birds.

For roosting space the standard 8 inches will be enough but if you can give them a little more room so much the better.

In the summer months they will spread out to keep cooler but in winter they will likely all cram together to share the warmth.

Wyandottes are known for being very good foragers and love to roam.

So if you can let them free range they will find lots of goodies to supplement their feed with.

If you can’t let them free range they will tolerate being in a run/pen.

Make sure to give each chicken 8 square feet.

Do not skimp on the space. As with all creatures, overcrowding and boredom can lead to antisocial behaviors.

Again though if you can allow them to free range they will love you for it. 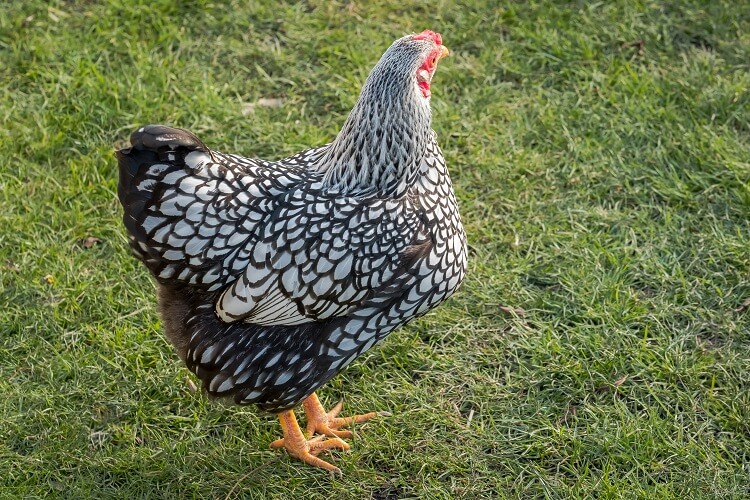 As a relatively new breed their history is known very well.

This is the quintessential American breed formed from the vision of four individuals who wanted a better dual purpose bird than those already seen on American soil.

These four men set to work to create a more streamlined bird.

Before the Wyandotte, American chickens all had various good traits (good layers, meat birds and hardy) but none of them had it all.

They originally worked with the now long gone Mooney bird and other breeds. Although the exact recipe is unknown we do know that Dark Brahmas and Silver Spangled Hamburgs were very likely contributors to the Silver Laced Wyandotte.

Early prototypes were both single and rose combed however since they were accepted by the American Poultry Association in 1883 only rose combs were allowed.

The Wyandotte was met with rave reviews and took the poultry world by storm – a true American first.

Even in the UK they were delighted with this new chicken and the Silver Laced Wyandotte enjoyed many years of success as a top performer.

However change was coming and with the outbreak of the second World War the poultry industry became mechanized.

Newer breeds of chicken that could lay in excess of 200 eggs per year were created and the Wyandotte slowly fell into almost obscurity.

There were a few flocks in the hands of enthusiasts and this state of affairs persisted until as recently as 2016.

However recently they have enjoyed a resurgence of popularity as a backyard bird.

Overall the Silver Laced Wyandotte is a solid and sensible choice for family farms and backyards.

They produce plenty of eggs, are low maintenance and can forage for themselves!

Wyandottes have long been a favorite bird in the northern US states because they are so cold hardy.

Their rose comb and dense feathering keep them toasty warm during our long and sometimes brutal winters.

Over the years other varieties of Wyandotte have emerged, but whichever color you choose from they will make a wonderful addition to your flock…

Ducks are remarkable waterfowl that are commonly found throughout the Northern Hemisphere. If you spot one in the wild, they are sure to catch your attention with their beautiful plumage, waddling gait, and an attention-grabbing quack. Did you know that there are over 50 different Read More →

Easy Ways To Break A Broody Hen (The Complete List)

Springtime is here which means it is chick rearing season! This means that some of your hens will start to become broody. Having broodies around can be a blessing, but it can also be a nuisance. Broodiness can become infectious and before you know it Read More →

When most people think of backyard poultry, they think about chickens. But did you know that domesticated ducks also make great additions to homesteads? Whether you are interested in collecting eggs every morning; planning on winning a poultry show; or just want a loving pet Read More →