Their funny waddling walk and permanent smile on their beaks makes it hard to not give them treats.

Everyone can remember as children feeding ducks bread but is this good for them?

In the wild you have two types of ducks (divers and dabblers) and they each have their own unique diet.

Keep reading to learn what ducks eat in the wild, what snacks you can safely feed them and how to feed your pet duck… 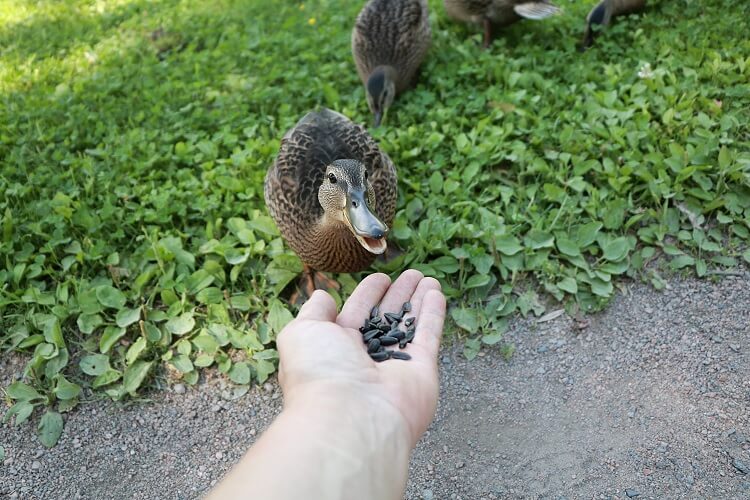 What Do Ducks Eat?

What Do Wild Ducks Eat? 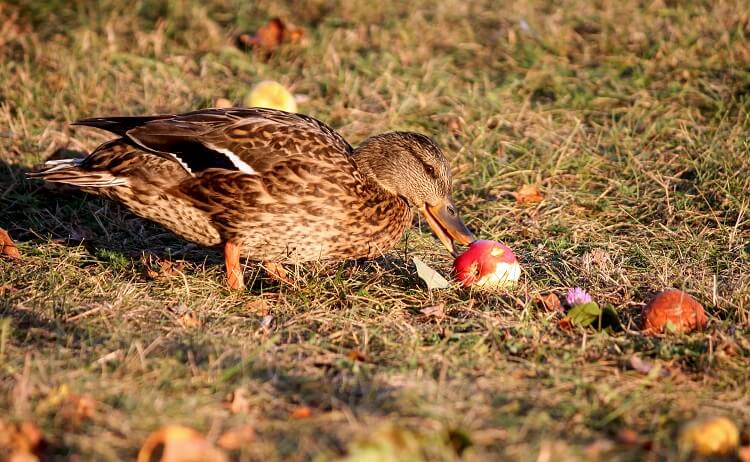 Wild ducks can be loosely divided into two groups: divers and dabblers.

Divers such as Mergansers will dive down below the water to search for food such as small crustaceans and plants. They can hover over an area while they are feeding and can stay submerged for several minutes at a time.

Dabblers sit on the water and dabble in the reeds and pond margins. They often put their bottoms up in the air so they can reach the shallow bottom of the water and eat plants roots and small mud dwelling creatures. They will also venture onto land to find any tasty little treats such as berries or grains.

All ducks are omnivores so they will eat almost anything:

To find food they will use their beaks as shovels to sift through the mud and muck. The water will run through the bristles while snails and crustaceans will remain in the mouth.

Ducks do not have teeth and instead they have a row of bristles around their bill to sift out tasty treats.

Their diet will change depending on what is in season and plentiful.

They will forage day and night to obtain enough food.

As the Winter can be harsh for wild ducks most will migrate to areas where the water does not freeze so they can survive through the winter.

However most dabbling ducks will stay put during the winter.

They are very well equipped to withstand the bitter cold weather as they have lots of fat and feathers. They will stay in an area that has unfrozen streams and ponds or areas where they can forage on land for their food.

If the water source freezes over they will fly to another location if they can.

They can survive quite some time before they actually need to eat but they will eat lots in the good months to prepare for winter. Ducks burn off their fat reserves and conserve energy then eat what they can find during winter months.

Unfortunately in severe winters many diving ducks die because the winter was too long and food was scarce.

What Do Pet Ducks Eat?

Compared to wild ducks, domestic ducks have a much more refined diet.

The majority have become used to duck or chicken feed as their main staple.

However if they are allowed they will forage for grass, slugs, bugs and tasty plant foliage to supplement their diet.

You can feed them any of the treats listed above for wild ducks (fruits, veggies, grains and berries) but avoid junk food like bread and pasta.

Interestingly there are some domestic ducks that actually work for a living by eating slugs and bugs. Several wineries employ Runner ducks to eat all the bugs they can find in the vineyards. These ducks are well cared for with secure accommodations and are fed grain at the end of the day.

When And How Often Do Ducks Eat?

Generally ducks eat the most during daylight hours.

They spend most of their day foraging for goodies in order to pack on fat for the winter.

In the summertime wild ducks can be seen foraging late into the night on lakes and water margins.

Divers can hunt up small fish and crustaceans through the night hours especially if the area has lots of small marine creatures.

Interestingly wild ducks will feed more at night during hunting season – a survival strategy no doubt.

Domestic ducks are usually locked up at night for their safety but if you do let them out you will likely see them hunting for their favorite snacks.

If you keep domestic ducks they will generally follow your schedule and eat when you take their feed to them. Also if you let them range they will pick up snacks throughout the day. 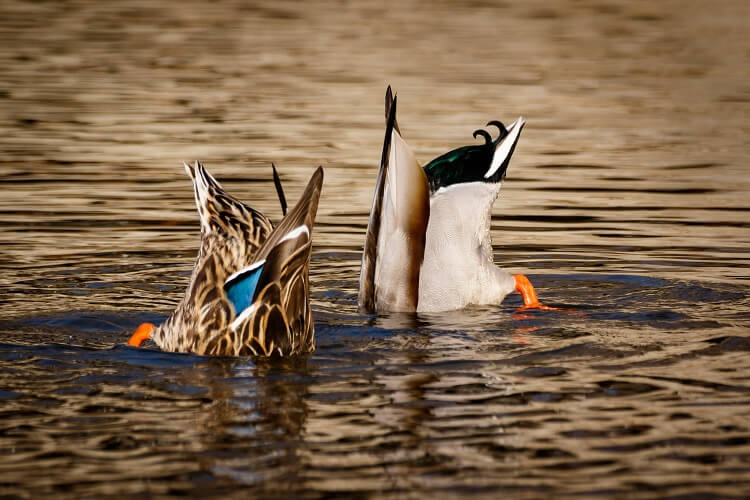 A Duck’s digestive system is very similar to a chicken’s system but there are a couple of key differences.

First of all a duck does not have a true crop like chickens.

A chicken’s crop is rather like an expanding sack where food is held until it goes into the proventriculus.

Ducks do not have this sack but they do have an esophagus which can expand to hold a fairly large amount of food- a Mallard’s esophagus can hold around a ¼lb of grain!

The second interesting difference is the gizzard (ventriculus). Just like a chicken’s gizzard, a duck’s gizzard will hold small stones and grit to grind up food but a duck’s gizzard can expand and contract in size depending on the diet they are currently eating.

Large hard items such as acorns and some crustaceans require more grinding power so the esophagus can increase in size and strength.

Smaller items such as berries, grass and slugs do not require as much power so the gizzard can shrink down in size.

What Snack Can You Feed Wild Ducks?

Wild ducks are omnivores so there are lots of snacks you can feed them.

Lettuce is a good snack for them – but it has to be fresh!

Grains and cracked corn are also good for them, as are frozen peas, oats, rice and whole corn.

Greens such as kale, collards and broccoli are great for them. Rip the leaves into small shreds that they can easily manage and toss them in the water to keep them fresh.

Fruits such as berries, banana, watermelon, peaches, apples and pears are also favorites (just make sure to remove the pits). All of these snacks should be in small bite sized pieces so that ducks can swallow them. When in season berries are a good nutritious treat for them too.

Other veggies such as cucumber, carrots, beets and even turnips can be fed to them. Some of these treats can be leftovers from your dinner (beets and carrots).

Just remember to chop them up into small pieces so they can be easily digested.

What Should Ducks Not Eat

The following items should never be fed to ducks:

Many of these items can cause allergic reactions or are outright poisonous.

Also bread should not be fed to ducks as there is little nutritional value in it – it should be kept as an occasional treat. 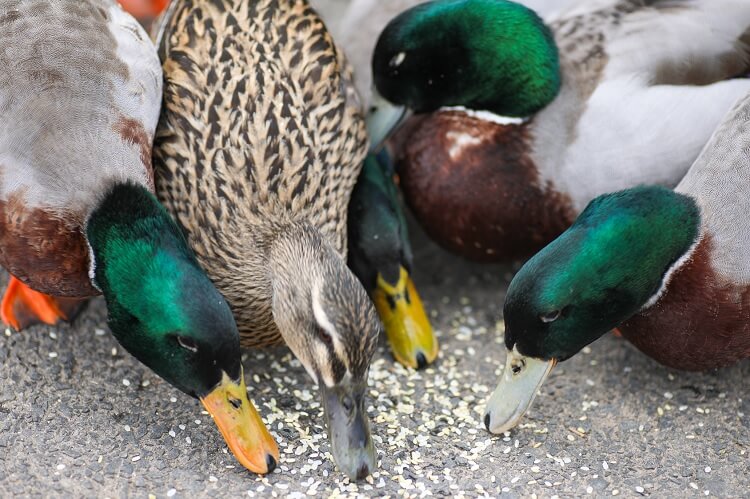 Domestic ducks vary from their wild cousins in their eating habits and choices because they have been domesticated and rely on what humans feed them.

Feed manufacturers do make a duck feed but it can be hard to come by so many folks use an all flock feed.

All flock feed is suitable for chickens, ducks, geese and turkeys.

However it usually does not have enough vitamin B for ducks.

This is simple to fix though you just need to add brewer’s yeast to their feed – add 1½ teaspoons per cup of feed. Once you have placed their feed in feeders just sprinkle the yeast ontop. Brewer’s yeast is rich in minerals and many B vitamins which ducks need. It is especially important in ducklings and maturing adults as deficiency can lead to leg, joint and neurological problems.

In addition to their regular feed they will need plenty of water. Ducks use water to soften their food, it also helps them absorb the nutrients from the food.

If you keep the water and feed slightly separated then the feed should not get too messy or soggy.

In addition to their feed you can feed them all the treats we mentioned above.

Fresh foods such as lettuce, kale collards, broccoli, peas , zucchini and cucumbers are all good. Fruits such as bananas, grapes, watermelon and peaches are all good too.

Remember these items are treats and therefore should not exceed 10% of the ducks total food intake for the day.

Allowing them to range over the yard will keep your grass trimmed and pesky bugs and slugs will disappear. They will devour bugs such as caterpillars, Japanese beetles and others. 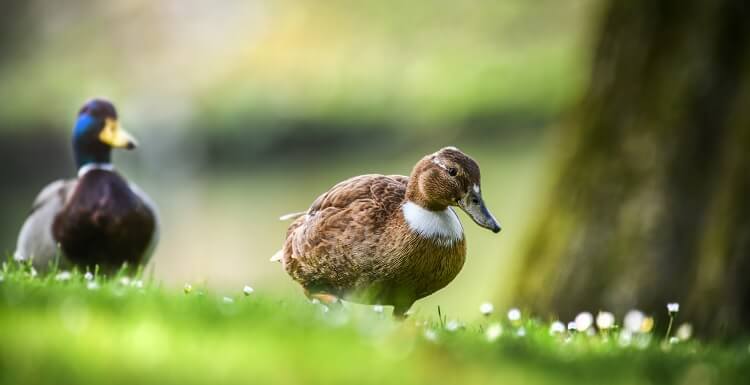 Ducks love to eat bread however it does not provide much in the way of vitamins, minerals and nutrition.

You should feed them bread sparingly, grains or greens are much better for them.

If ducklings eat too much bread they can develop angel wing – this is not treatable.

Ducks will graze on grass as well as leafy greens such as lettuce and dandelions. All these greens are rich in vitamins and nutrients which will help to keep them healthy.

Ducks love to eat small fish, tadpoles, crustaceans and insects when they can find them.

Just like bread chips have no nutritional value so ducks should not eat them. Some chips even contain preservatives which can be harmful if eaten in large quantities.

Did you know that all ducks you meet are variations that derived from the Mallard duck – the only exception to this is the Muscovy.

Ducks are definitely useful animals to keep on your homestead.

They are very efficient at bug patrol and help to keep weeds down in you pond. They will also keep areas of your lawn fairly well trimmed.

As a farm bird ducks lay wonderfully rich eggs which are superb for baking.

They really are not any more trouble than chickens (just different to keep) – you can even keep chickens and ducks together. Now you should know exactly what do ducks eat and how to feed them.