Grit is an essential part of a chicken’s digestive needs.

Because they do not have teeth, grit is used to help them digest their food.

It is also used to help strengthen their bones and egg shells.

Hens that are fed solely chicken feed and nothing else actually do not need grit. Chicken feed is easily broken down by the grinding action of the gizzard alone.

However, if your chickens are eating scraps and grass then they will need grit.

Chickens that are allowed to free range and forage can often find the grit they need like small pebbles and gravel. However, not all pasture is created equal and if your land does not contain a reasonable quantity of small rocks then your flock needs some grit.

Keep reading to learn all about grit. What is chicken grit? When do chickens need grit? And much more… 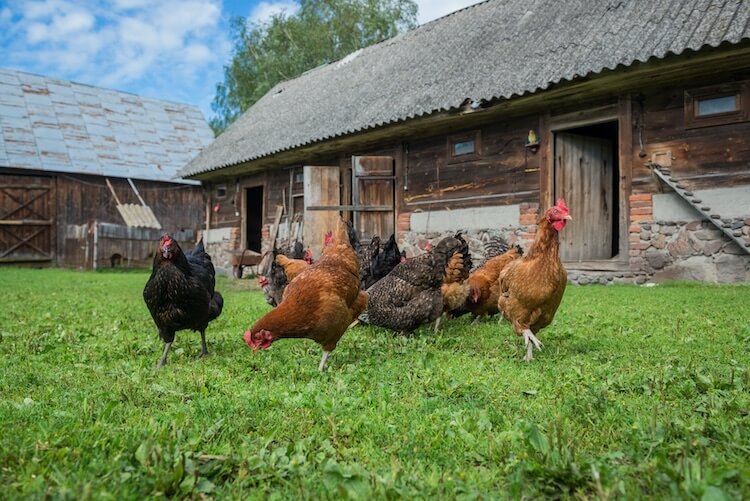 What is Chicken Grit?

Soluble grit can be either oyster shell or mineral grit.

This is given to chickens to help them lay strong shelled eggs. Although commercial feed does have soluble grit in it, some chickens may require more. So oyster shell should be offered to them as a free choice supplement.

Calcium not only helps with the egg shells, it will also strengthen their bones.

It should not be given to chickens that are not yet laying as they will not need it until they start to lay.

The second type of grit is called insoluble grit and this is either flint or granite.

It is called insoluble because it does not dissolve in water. This type of grit is important as it helps chickens digest their food.

When chickens eat insoluble grit it lodges in the gizzard where it helps them to grind down food other than chicken feed into a paste consistency that is easily digested.

What is chicken grit made from?

Soluble chicken grit is normally made from oyster shell or other seashells.

These shells are ground down into a manageable size for a chicken to eat and are basically calcium carbonate.

You can also make your own calcium by crushing egg shells. You should wash used shells and bake them in a low heat oven for twenty minutes. Leave them to cool and then crush them into small pieces.

Insoluble grit is made from finely ground flint or granite. 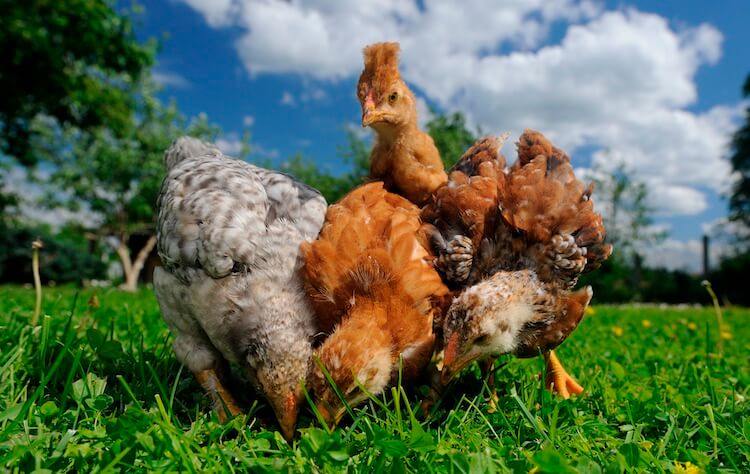 Do I Need To Give My Chickens Grit?

This is a question that has been debated a lot recently.

If chickens are only fed commercial feed then they should not need insoluble grit as this feed is easily broken down into a paste with natural saliva and water.

Chickens that are allowed to free range or are given treats, will need grit to help break down some of the tougher things they eat such as plant matter, mealworms, bugs etc.

If you let your chickens free range and they do not have access to grit then they can suffer from problems such as crop impaction or constipation. If your hens have access to natural grit then they will help themselves as and when they need to by eating small pebbles and other small rocks.

A container of insoluble grit should be offered to your chickens as well just in case they cannot get enough from natural sources.

It can be hard to tell if your hen has enough grit but one way to tell is by their crop. When a hen does not get enough grit they will start to get a boggy crop. This means food is not being digested in their crop and it can lead to sour crop and impacted crop.

If you are concerned then you can check their crop first thing in the morning. Their crops should be flat and empty. If the crop is full, squishy, or boggy then she is heading for sour crop.

An easy way to tell if they are getting enough soluble grit is by checking their egg shells. If their eggs are thin and crack easily then you should give them should extra calcium.

What is Chicken Grit Used For?

Soluble grit, like oyster shell, is used to supplement calcium levels in the hen’s body.

It is used as a preventative and supportive nutritional supplement. Low levels of calcium impact the quality of the egg shells. Critically low levels can lead to bone fractures, usually of the legs or feet from jumping or flying up to the perch.

The soluble grit is absorbed slowly through the hen’s intestine. It is broken down into calcium and carbonate and shuttled to where it is most needed by the circulatory system. Most of it goes to egg production, but some will go towards building strong bones, enhancing the immune system and aiding cardiovascular health.

Some hens will need more calcium than others. Egg laying hens will require greater amounts than hens that lay only a couple of eggs per week.

Insoluble grit on the other hand is used as a digestive supplement.

It travels as far as the gizzard, where it goes to work.

Grit helps your chickens grind down the food into an easily digested paste which passes easily through the digestive system where the goodness is extracted from the paste.

Without insoluble grit to break down food the hen’s digestive system may develop problems that can be difficult to solve, such as crop impaction.

How To Feed Your Chickens Grit

Each hen is an individual.

She will take as much or as little calcium as she needs for her own health. Heavy layers will use more than light layers.

Both soluble and insoluble grit should be offered as a free choice and be available at all times.

They will take what they need.

It is estimated that a laying hen require 4-5 grams of calcium per day. This is roughly three times the requirement of non-layers.

Oyster shell should never be added to their feed as some hens require more than others. Extra calcium in older non laying hens can cause kidney problems and potentially lead to death.

By giving them containers of both types of grit, you can be sure that your hens will take what they need when they need it.

When To Start Feeding Chickens Grit

Chicks will need grit when they are given food other than chick crumb.

Once you start to give them things like dandelions, clumps of grass, and mealworms they will need grit. Chick grit is finely ground and is right for them until around eight weeks when they can change over to regular sized grit. Chicks do not need oyster shell until they start to lay, somewhere around 16-20 weeks.

Roosters do not need oyster shell since they do not lay eggs, but they do need insoluble grit for their digestion.

When should I give chicks grit?

Once you start feeding your chicks food other than chick crumb they will insoluble grit. Chick grit is much smaller than chicken grit so make sure you have the right one.

The fact that oyster shell and grit are both called grit can be confusing.

I hope this article has cleared up any questions you may have had.

They are two separate entities and both are needed by your flock.

Oyster shell is needed rather more than insoluble grit because of their egg laying.

Whereas insoluble grit is needed as a digestive aid to make sure good intestinal health and absorption of nutrients from the food they eat. Both types of grit are fairly cheap and will last for a long time. When compared to some of the costs associated with keeping chickens, grit is very cheap.

Have you ever noticed one of your chickens being pecked? Although many chicken breeds are very friendly and accepting, chicken bullying does exist. Maybe the one being bullied is the smallest or newest chicken. Whilst the occasional pecking is nothing to be concerned about it Read More →

What Can Chickens Eat: Grapes, Bread and More…

It comes as a shock to some people to learn that chickens are omnivores! Many folks think they just eat grass and feed, but nothing could be further from the truth. While the bulk of their modern-day nutrition comes from prepared grain feed, they will Read More →